Newborn Loses Faith In Humanity After Record 6 Days. SCHAUMBURG, IL—In a turn of events that has stunned the worldwide medical community, local infant Nathan Jameson, born just six days ago, has become the youngest person ever to permanently and irrevocably lose all faith in humanity. 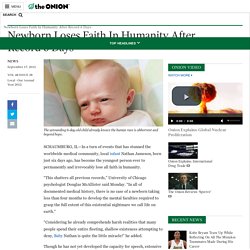 “This shatters all previous records,” University of Chicago psychologist Douglas McAllister said Monday. “In all of documented medical history, there is no case of a newborn taking less than four months to develop the mental faculties required to grasp the full extent of this existential nightmare we call life on earth.” “Considering he already comprehends harsh realities that many people spend their entire fleeting, shallow existences attempting to deny, Baby Nathan is quite the little miracle!” He added. Funny & Cute Owl Videos Compilation 2014 [NEW] 11 photos of Kate Moss - The Kate Moss Portfolio. Bangui prepares for pope's visit amid security concerns. Bangui, Central African Republic - "Have the streets become larger, or has the government started cleaning them? 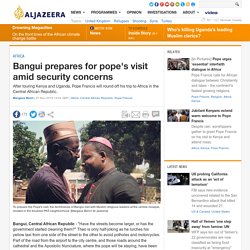 " Theo is only half-joking as he lurches his yellow taxi from one side of the street to the other to avoid potholes and motorcycles. Part of the road from the airport to the city centre, and those roads around the cathedral and the Apostolic Nunciature, where the pope will be staying, have been freshly asphalted and gravelled - so freshly, in fact, that, mere days before the Pope's visit, the work is still going on. Along the route are banners welcoming the pope in French, Sango, Spanish and even Latin. Other signs read, "Minusca get out. Sangaris too," in reference to the United Nations and French military missions in the country.

Wet Wipes Box Says Flush. New York’s Sewer System Says Don’t. Photo With its sewer system under siege, tallying millions of dollars in equipment damage across its underground maze, New York City is confronting a menace that has gummed the gears of plumbing networks around the world: the common wet wipe. 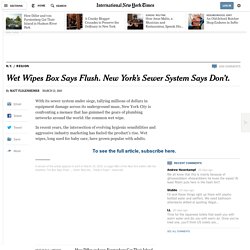 In recent years, the intersection of evolving hygienic sensibilities and aggressive industry marketing has fueled the product’s rise. Wet wipes, long used for baby care, have grown popular with adults. Breathtaking Photos Of A Little Girl 'Tippi' Growing Up Alongside Wild Animals. Tippi spent the first 10 years of her life living alongside some of the world’s most amazing (and dangerous) wild animals. 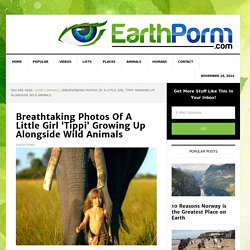 In proof, there are images galore. Why Portland’s Urban Pioneers are Moving to Detroit. Monday, March 16, 2015Annie Ellison, GoLocalPDX Reporter The real hipsters of Portland have had it. 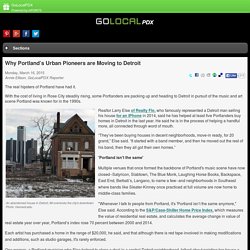 12 ways to kiss hello in Argentina. Homeland Will Basically Be an Entirely Different Show Next Season. What do you think of when you think of Homeland? 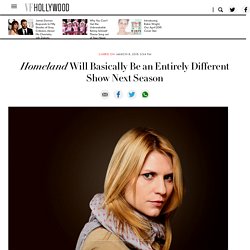 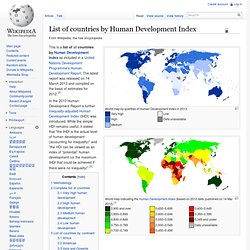 Edible Chocolate Anus. Getting Out Of Afghanistan. Grammys 2015: Transcript of Bob Dylan&apos;s MusiCares Person of Year speech. Bob Dylan was honored by MusiCares, the charity organization that aids musicians in need, at the Los Angeles Convention Center on Friday night. 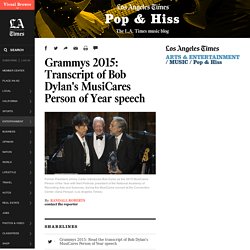 After performances by artists including Tom Jones, Sheryl Crow, Neil Young, Beck, Jackson Browne and others, Dylan himself took a rare opportunity in the spotlight to deliver a 30-plus-minute acceptance speech. Expansive, funny and insightful, Dylan didn't pull any punches, calling out songwriters who had criticized his work while indicting Nashville and commercial country music. He was introduced by former President Jimmy Carter, and walked out to a standing ovation. Relax, don't do it: readers' photos of chilled out pets. Martin Scorsese talks 'The Grandmaster' with Wong Kar Wai. 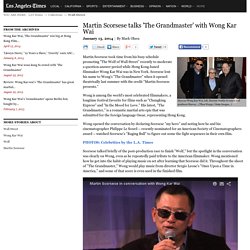 Scorsese lent his name to Wong's "The Grandmaster" when it opened theatrically last summer with the credit "Martin Scorsese presents. " The Grandmaster (film) The film chronicles the life of the Wing Chun grandmaster Ip Man from the 1930s in Foshan, his flight to Hong Kong after the Second Sino-Japanese War, and the events leading to his death. 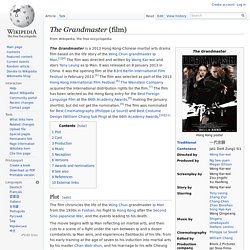 The movie begins with Ip Man reflecting on martial arts, and then cuts to a scene of a fight under the rain between Ip and a dozen combatants. Steely Dan - Live at the Rainbow Theatre, London, England (05/20/1974) Pretzel Logic: Understanding Why Your Dad's Favorite Band Is Playing Coachella. Donald Fagen Defends Steely Dan To Friends. NEW YORK—While having drinks with friends at a local bar Monday, Donald Fagen, 60, a Rock and Roll Hall of Fame inductee and cofounder of the multiplatinum-selling American rock band Steely Dan, was once again forced to defend his appreciation for the multiplatinum-selling American rock band Steely Dan.

Threats to Americans, ranked (by actual threat instead of media hype) Here’s Why Steve Jobs Didn’t Let His Kids Use iPads and Why You Shouldn’t Either.