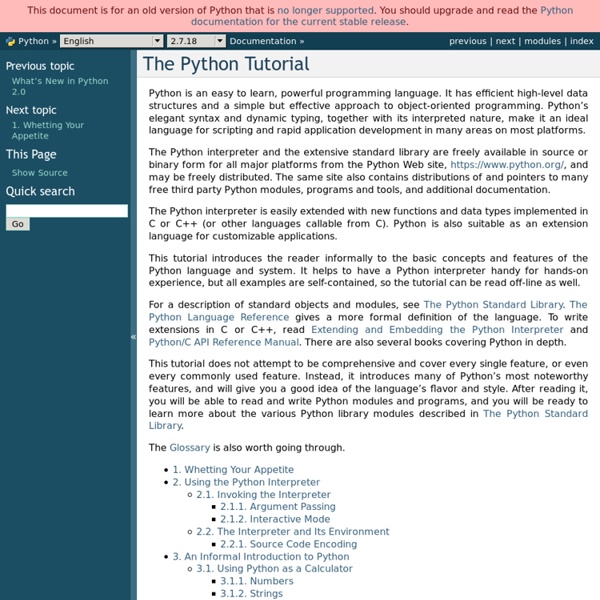 Python is an easy to learn, powerful programming language. It has efficient high-level data structures and a simple but effective approach to object-oriented programming. Python’s elegant syntax and dynamic typing, together with its interpreted nature, make it an ideal language for scripting and rapid application development in many areas on most platforms. The Python interpreter and the extensive standard library are freely available in source or binary form for all major platforms from the Python Web site, and may be freely distributed. The same site also contains distributions of and pointers to many free third party Python modules, programs and tools, and additional documentation. The Python interpreter is easily extended with new functions and data types implemented in C or C++ (or other languages callable from C). This tutorial introduces the reader informally to the basic concepts and features of the Python language and system. The Glossary is also worth going through.

Learning BeagleBone Python Programming In this In this article by Alexander Hiam, author of the book Learning BeagleBone Python Programming, we will go through the initial steps to get your BeagleBone Black set up. By the end of it, you should be ready to write your first Python program. We will cover the following topics: Logging in to your BeagleBoneConnecting to the InternetUpdating and installing softwareThe basics of the PyBBIO and Adafruit_BBIO libraries How to edit an image Aquivado: Este artigo foi arquivado, pois o conteúdo não é mais considerado relevante para se criar soluções comerciais atuais. Se você achar que este artigo ainda é importante, inclua o template {{ForArchiveReview|escreva a sua justificativa}}. Acredita-se que este artigo ainda seja válido no contexto original (quando ele foi escrito) Overview

Python Programming Python Programming From Wikibooks, open books for an open world Jump to: navigation, search This book describes Python, an open-source general-purpose interpreted programming language available for a broad range of operating systems. The Python Standard Library — Python v2.7.2 documentation While The Python Language Reference describes the exact syntax and semantics of the Python language, this library reference manual describes the standard library that is distributed with Python. It also describes some of the optional components that are commonly included in Python distributions. Python’s standard library is very extensive, offering a wide range of facilities as indicated by the long table of contents listed below. The library contains built-in modules (written in C) that provide access to system functionality such as file I/O that would otherwise be inaccessible to Python programmers, as well as modules written in Python that provide standardized solutions for many problems that occur in everyday programming. Some of these modules are explicitly designed to encourage and enhance the portability of Python programs by abstracting away platform-specifics into platform-neutral APIs.

80+ Best Free Python Tutorials, eBooks & PDF To Learn Programming Online Thinking of learning Python to make a dent in the universe? We have compiled a huge list of absolutely FREE Python tutorials, eBooks and PDFs to make your life easier. Python has taken over the programming world with a storm and has now become one of the most popular languages. You might have your doubts, but Python is growing at a rate which is faster than that of any other programming language.

Beagleboard:C/C++ Programming 1) Connect your BeagleBone to your computer using a Mini-USB Data Cable. 2) Using a terminal shell, such as PuTTy, serial connect into your BeagleBone and log in as 'root' 3) Now, we will create a simple C program that turns an on-board LED on and off ten times. Type this into your terminal shell. nano example.cpp 4) Copy and paste this code into the "nano" text editor. 5) Next, press Ctrl+X, type "Y" to save changes, and press enter. 6) Now, we need to compile the program and make an executable file so you can run it. Type the following into your terminal shell.

Falling In Love With Python Lately, I've been spending some private time learning Python. It is definitely a different beast than C#. For one, it has taken a little while to get used to the dynamicism of Python compared to C#. Now, don't get me wrong, I'm still in love with C#, I just am falling in love with certain aspects of the Python language. And, well, I'm going to blog about it here because I don't really have any one to share this with at the moment and I need to get it off my chest. I just had my first “OH SHIT!” Python Introduction - Google's Python Class - Google Code Python is a dynamic, interpreted language. Source code does not declare the types of variables or parameters or methods. This makes the code short and flexible, and you lose the compile-time type checking in the source code. Python tracks the types of all values at runtime and flags code that does not make sense as it runs.

Python Programming Language Picking a Python Version: A Manifesto by David Mertz - O'Reilly Media , 2015There are two major versions of the Python: the Python 2.x series, and the newer Python 3.x series. This report guides you through the implicit decision tree of choosing what Python version, implementation, and distribution is best suited for you.(525 views) The Hitchhiker's Guide to Python by Kenneth Reitz - O'Reilly Media , 2016This handcrafted guide exists to provide both novice and expert Python developers a best practice handbook to the installation, configuration, and usage of Python on a daily basis.