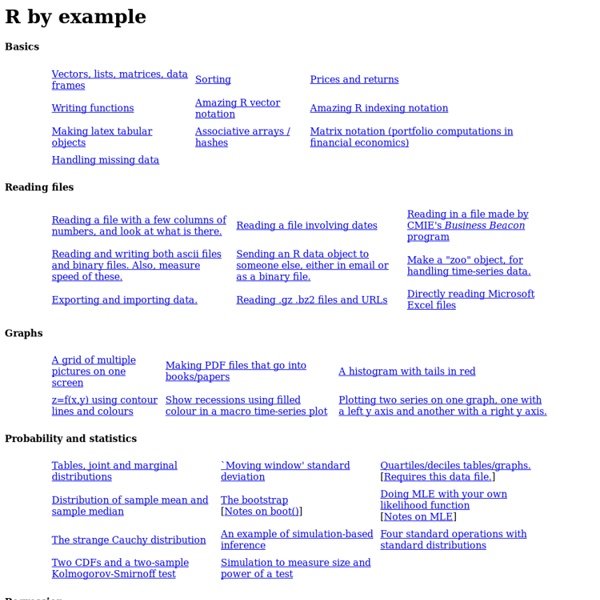 Basics Reading files Graphs Probability and statistics Regression Time-series analysis All these examples in one tarfile. Outright non-working code is unlikely, though occasionally my fingers fumble or code-rot occurs. Other useful materials Suggestions for learning R The R project is at : In particular, see the `other docs' there. Over and above the strong set of functions that you get in `off the shelf' R, there is a concept like CPAN (of the perl world) or CTAN (of the tex world), where there is a large, well-organised collection of 3rd party software, written by people all over the world. The dynamism of R and of the surrounding 3rd party packages has thrown up the need for a newsletter, R News. library(help=boot) library(boot) ? But you will learn a lot more by reading the article Resampling Methods in R: The boot package by Angelo J. Ajay Shah, 2005 Related:  Python • Data Science

Python Tutorials for Kids 8+ Statistics with R Warning Here are the notes I took while discovering and using the statistical environment R. However, I do not claim any competence in the domains I tackle: I hope you will find those notes useful, but keep you eyes open -- errors and bad advice are still lurking in those pages... Should you want it, I have prepared a quick-and-dirty PDF version of this document. The old, French version is still available, in HTML or as a single file. You may also want all the code in this document. 1. This work is licensed under a Creative Commons Attribution-NonCommercial-ShareAlike 2.5 License.

How to Think Like a Computer Scientist Learning with Python by Allen Downey, Jeff Elkner and Chris Meyers. This book is now available for sale at Lulu.com. Hardcopies are no longer available from Green Tea Press. How to Think... is an introduction to programming using Python, one of the best languages for beginners. How to Think... is a Free Book available under the GNU Free Documentation License. Please send suggestions, corrections and comments about the book to feedback{at}thinkpython{dot}com. Download The book is available in a variety of electronic formats: Precompiled copies of the book are available in PDF and Postscript . Translations Here are some translations of the book into other (natural) languages: Spanish translation by Gregorio Inda. Other Free Books by Allen Downey are available from Green Tea Press. If you are using this book and would like to make a contribution to support my work, please consider making a donation toward my web hosting bill by clicking on the icon below.

Statistics, R, Graphics and Fun | Yihui Xie Bruce Eckel's MindView, Inc: Thinking in Python You can download the current version of Thinking in Python here. This includes the BackTalk comment collection system that I built in Zope. The page describing this project is here. The current version of the book is 0.1. The source code is in the download package. This is not an introductory Python book. However, Learning Python is not exactly a beginning programmer's book, either (although it's possible if you're dedicated). Revision History Revision 0.1.2, December 31 2001. Quick-R: Home Page

Python for Fun This collection is a presentation of several small Python programs. They are aimed at intermediate programmers; people who have studied Python and are fairly comfortable with basic recursion and object oriented techniques. Each program is very short, never more than a couple of pages and accompanied with a write-up. I have found Python to be an excellent language to express algorithms clearly. From many years of programming these are some of my favorite programs. Many thanks to Paul Carduner and Jeff Elkner for their work on this page, especially for Paul's graphic of Psyltherin (apologies to Harry Potter) and to the teams behind reStructured text and Sphinx to which the web pages in this collection have been adapted. Chris Meyers

R Tutorial — R Tutorial 321a Boyd Graduate Studies University of Georgia Athens, Georgia 30602 Introductory Materials¶ These materials are designed to offer an introduction to the use of R. It is not exhaustive, but is designed to just provide the basics. Thank You! I have received a great deal of feedback from a number of people for various errors, typos, and dumb things. I have also written a book about programming R. Code Like a Pythonista: Idiomatic Python In this interactive tutorial, we'll cover many essential Python idioms and techniques in depth, adding immediately useful tools to your belt. There are 3 versions of this presentation: ©2006-2008, licensed under a Creative Commons Attribution/Share-Alike (BY-SA) license. My credentials: I am a resident of Montreal,father of two great kids, husband of one special woman,a full-time Python programmer,author of the Docutils project and reStructuredText,an editor of the Python Enhancement Proposals (or PEPs),an organizer of PyCon 2007, and chair of PyCon 2008,a member of the Python Software Foundation,a Director of the Foundation for the past year, and its Secretary. In the tutorial I presented at PyCon 2006 (called Text & Data Processing), I was surprised at the reaction to some techniques I used that I had thought were common knowledge. Many of you will have seen some of these techniques and idioms before. These are the guiding principles of Python, but are open to interpretation. import this

The R language, for programmers IntroductionAssignment and underscoreVariable name gotchasVectorsSequencesTypesBoolean operatorsListsMatricesMissing values and NaNsCommentsFunctionsScopeMisc.Other resources Introduction I have written software professionally in perhaps a dozen programming languages, and the hardest language for me to learn has been R. The language is actually fairly simple, but it is unconventional. These notes are intended to make the language easier to learn for someone used to more commonly used languages such as C++, Java, Perl, etc. R is more than a programming language. This document is a work in progress. Assignment and underscore The assignment operator in R is <- as in e <- m*c^2. It is also possible, though uncommon, to reverse the arrow and put the receiving variable on the right, as in m*c^2 -> e. It is sometimes possible to use = for assignment, though I don’t understand when this is and is not allowed. At some time in the past R, or its ancestor S, used underscore as assignment. Vectors Types

Hands-On Python A Tutorial Introduction for Beginners Hands-On Python A Tutorial Introduction for Beginners Contents Chapter 1 Beginning With Python 1.1. You have probably used computers to do all sorts of useful and interesting things. 1.1.1. First let us place Python programming in the context of the computer hardware. z = x+y is an instruction in many high-level languages that means something like: Access the value stored at a location labeled x Calculate the sum of this value and the value stored at a location labeled y Store the result in a location labeled z. No computer understands the high-level instruction directly; it is not in machine language. Obviously high-level languages were a great advance in clarity! If you follow a broad introduction to computing, you will learn more about the layers that connect low-level digital computer circuits to high-level languages. 1.1.2. There are many high-level languages. 1.1.3. If you are not sure whether your computer already has Python, continue to Section 1.2.2 , and give it a try. Windows Linux 1.2.