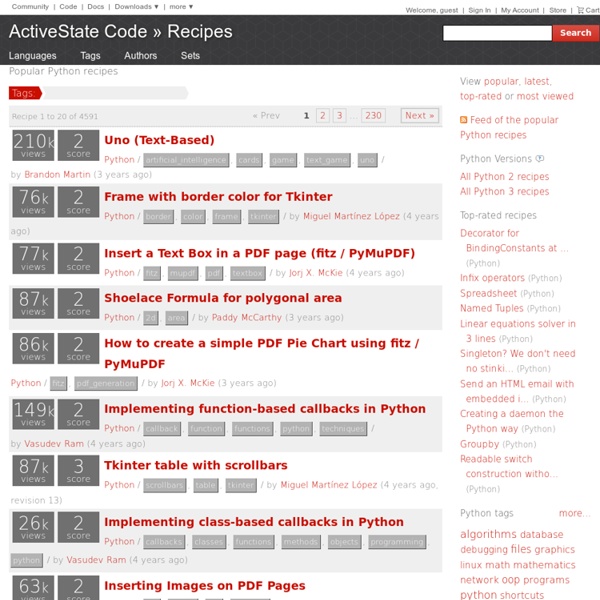 Python Examples On these pages, I have collected a bit of information about the Python programming language, along with a bunch of examples. These might be useful if you want to see some of the features without actually learning the language itself. You don't have to read through all of this in order. Just pick the pages which look most interesting to you. A jQuery inline form validation, because validation is a mess « When it comes to form validation, it’s hard to have a versatile solution that works with every form. Figuring out how to display errors is not a simple task. This is something I tried to remedy with this script.

Package Index : Isomyr 0.1 A Python Isometric Game Engine. <><> I S O M Y R <> A Python Isometric Game Engine i-so-myr: (n) Any of one or more scenes with the same measurements in foreground and background, that have different properties and can exist in any of several game worlds for a measurable period of time. Isomyr is an isometric game engine based on Pygame, and written in Python.

Variables and Types - Learn Python - Free Interactive Python Tutorial Python is completely object oriented, and not "statically typed". You do not need to declare variables before using them, or declare their type. Every variable in Python is an object. This tutorial will go over a few basic types of variables. Python for Software Design: How to Think Like a Computer Scientist How to Think Like a Computer Scientist by Allen B. Downey Code Like a Pythonista: Idiomatic Python In this interactive tutorial, we'll cover many essential Python idioms and techniques in depth, adding immediately useful tools to your belt. There are 3 versions of this presentation: ©2006-2008, licensed under a Creative Commons Attribution/Share-Alike (BY-SA) license.

jQuery forms, 100 best 5 years ago, web developers and most programmers were forced to do tons of things in order to program accordingly a website, from the basic layout to defining all the different variables and actions that give life to the site. Developers often utilized JavaScript in some part of the process to facilitate the construction of many different webpages; though JS definitely helped out developers, there were still a lot of things that made them consume dozens of time and achieve minimal results. But since the debut of the powerful framework jQuery, things changed forever. jQuery can be used for many things, from developing fancy animations to simply spice up ordinary designs that were previously difficult to do.

Solving Every Sudoku Puzzle by Peter Norvig In this essay I tackle the problem of solving every Sudoku puzzle. It turns out to be quite easy (about one page of code for the main idea and two pages for embellishments) using two ideas: constraint propagation and search. Sudoku Notation and Preliminary Notions First we have to agree on some notation.

WebFrameworks A Web framework is a collection of packages or modules which allow developers to write Web applications (see WebApplications) or services without having to handle such low-level details as protocols, sockets or process/thread management. The majority of Web frameworks are exclusively server-side technology, although, with the increased prevalence of AJAX, some Web frameworks are beginning to include AJAX code that helps developers with the particularly tricky task of programming (client-side) the user's browser. At the extreme end of the client-side Web Frameworks is technology that can use the web browser as a full-blown application execution environment (a la gmail for example): see Web Browser Programming for details. Generally, frameworks provide support for a number of activities such as interpreting requests (getting form parameters, handling cookies and sessions), producing responses (presenting data as HTML or in other formats), storing data persistently, and so on.

JythonFaq/GeneralInfo - JythonWiki JythonFaq What is Jython? Jython is the successor to JPython. The Jython project was created in accordance with the CNRI JPython 1.1.x license, in order to ensure the continued existence and development of this important piece of Python software. The Python Tutorial Python is an easy to learn, powerful programming language. It has efficient high-level data structures and a simple but effective approach to object-oriented programming. Python’s elegant syntax and dynamic typing, together with its interpreted nature, make it an ideal language for scripting and rapid application development in many areas on most platforms. The Python interpreter and the extensive standard library are freely available in source or binary form for all major platforms from the Python Web site, and may be freely distributed. The same site also contains distributions of and pointers to many free third party Python modules, programs and tools, and additional documentation. The Python interpreter is easily extended with new functions and data types implemented in C or C++ (or other languages callable from C).

Baseline - a designer framework by ProjetUrbain.com “Real” baseline grid on the web When I first started to design Baseline, I wanted to base the grid on the work of Josef Müller-Brockmann, unfortunately some missing CSS attributes — like type leading — kept me from implementing a true grid based approach. I then decided to another look at the basic grid used in print: the baseline grid. Most frameworks and examples of baseline grids simply put the type on a regular line-height, but one problem with this approach is that the text rarely lines up correctly between columns and headlines — H1 through H6.

WhyJython - JythonWiki Jython, lest you do not know of it, is the most compelling weapon the Java platform has for its survival into the 21st century - SeanMcGrath Why Jython There are numerous alternative languages implemented for the Java VM. The following features help to separate Jython from the rest: Dynamic compilation to Java bytecodes - leads to highest possible performance without sacrificing interactivity. Ability to extend existing Java classes in Jython - allows effective use of abstract classes.