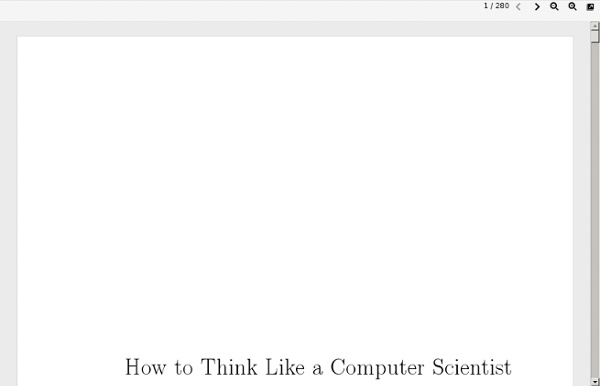 3. An Informal Introduction to Python — Python v2.7.2 documentation In the following examples, input and output are distinguished by the presence or absence of prompts (>>> and ...): to repeat the example, you must type everything after the prompt, when the prompt appears; lines that do not begin with a prompt are output from the interpreter. Note that a secondary prompt on a line by itself in an example means you must type a blank line; this is used to end a multi-line command. Many of the examples in this manual, even those entered at the interactive prompt, include comments. Comments in Python start with the hash character, #, and extend to the end of the physical line. Let’s try some simple Python commands. 3.1.1. The interpreter acts as a simple calculator: you can type an expression at it and it will write the value. The integer numbers (e.g. 2, 4, 20) have type int, the ones with a fractional part (e.g. 5.0, 1.6) have type float. The return type of a division (/) operation depends on its operands. 3.1.2. >>> '"Isn\'t," she said.''" See also 3.1.3.

The Python Tutorial — Python v2.7 documentation Python is an easy to learn, powerful programming language. It has efficient high-level data structures and a simple but effective approach to object-oriented programming. Python’s elegant syntax and dynamic typing, together with its interpreted nature, make it an ideal language for scripting and rapid application development in many areas on most platforms. The Python interpreter and the extensive standard library are freely available in source or binary form for all major platforms from the Python Web site, and may be freely distributed. The Python interpreter is easily extended with new functions and data types implemented in C or C++ (or other languages callable from C). This tutorial introduces the reader informally to the basic concepts and features of the Python language and system. For a description of standard objects and modules, see The Python Standard Library. The Glossary is also worth going through.

PEP 8 -- Style Guide for Python Code Code should be written in a way that does not disadvantage other implementations of Python (PyPy, Jython, IronPython, Cython, Psyco, and such).For example, do not rely on CPython's efficient implementation of in-place string concatenation for statements in the form a += b or a = a + b. This optimization is fragile even in CPython (it only works for some types) and isn't present at all in implementations that don't use refcounting. In performance sensitive parts of the library, the ''.join() form should be used instead. This will ensure that concatenation occurs in linear time across various implementations.Comparisons to singletons like None should always be done with is or is not, never the equality operators.Also, beware of writing if x when you really mean if x is not None -- e.g. when testing whether a variable or argument that defaults to None was set to some other value.