Facing History and Ourselves 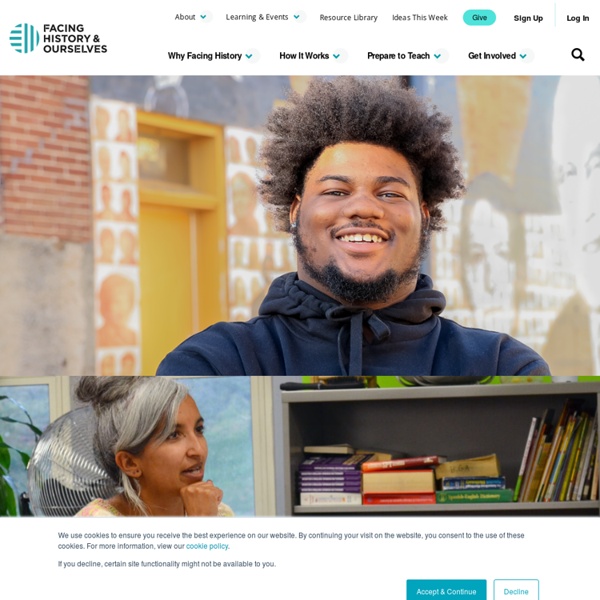 Guide to the Constitution We the People of the United States, in Order to form a more perfect Union, establish Justice, insure domestic Tranquility, provide for the common defense, promote the general Welfare, and secure the Blessings of Liberty to ourselves and our Posterity, do ordain and establish this Constitution for the United States of America. Article I: Legislative Essays » Section 1 Ed Tech Pick - Teacher's Assistant Pro By Alicia Rescigno, Education Coordinator Director, Know My World Looking for a classroom assistant? No matter what time of the year it is, sometimes a teacher can use the help of an assistant- any assistant that can help document their students’ behavior, actions and any pertinent documentation for each student in their classroom.

Getting started with Assessment for Learning Glossary Active learning Learning which engages students and challenges their thinking, using a variety of activities. Assessment for learning Essential teaching strategies during learning to help teachers and students evaluate progress in terms of understanding and skills acquisition, providing guidance and feedback for subsequent teaching and learning. Closed question A question that can be answered with either a single word (usually ‘yes’ or ‘no’) or a short phrase and the choice of answers is limited.

Gettysburg Animated Map « Back to Maps | More on Gettysburg » « View All Animated Maps | More Animated Maps: JavaScript and Adobe Flash 9 are required to view the CWPT Animated Maps. Watch our animated map of the Battle of Gettysburg, produced by Wide Awake Films. Nature inquiries with iNaturalist iNaturalist is a fantastic site for identifying and appreciating living things in your area. The app is available on iOS and Android. When photographs of wildlife are uploaded, the iNaturalist community will identify them and more information is provided. In addition, the data collected on the app is used by scientific data repositories to monitor species and their populations.

As communist China turns 70, a 'Great Fracture' emerges with US Mike Pompeo, Wang Yi are posing for a picture: US Secretary of State Mike Pompeo meets China's State Councilor and Foreign Minister Wang Yi at the United Nations Seventy years after the founding of communist China, once rosy predictions of coexistence with the United States have dissipated with expectations rising instead of a long-term, globe-spanning rivalry. The United Nations General Assembly showcased the harsh new tone between the world's two largest economies, with US President Donald Trump declaring from the rostrum that the age of tolerance for China's "abuses" was over. Representing China at the annual summit of leaders, Foreign Minister Wang Yi vowed that his country -- "with a 5,000-year civilization" -- would never be cowed by threats. UN Secretary-General Antonio Guterres voiced worries in his own address as he pleaded for international cooperation. "Two decades later, this theory has been tested and proven completely wrong," Trump said in his UN address.

Teaching With Documents Skip Navigation. Teachers Home > Teachers' Resources > Teaching With Documents Lessons by Era More Lesson Plan Resources Primary Source Research & Classroom Resources Short Film about Playground Inclusion wins International Acclaim - Respect Ability Rockville, Maryland, Dec. 6 – All kids want to play. Kids with disabilities are no different. “Ian” is a short, animated film inspired by the real-life Ian, a boy with a disability determined to get to the playground despite his playmates bullying him. Revisiting Hitler, in a New Authoritarian Age In a 2018 volume of the German Yearbook of Contemporary History devoted to new research on Hitler, the editors Elizabeth Harvey and Johannes Hürter identified a recent “Hitler boom,” an unexpected increase in German research into Hitler beginning around 2013. But they’re wary of ascribing that upswing to public concerns. Academics, Harvey said, are largely not responding to “the worrying upsurge today of right-wing extremism, anti-Semitism, racism, right-wing populism, extremist leader figures” by thinking, “Right, I’m going to go write a better biography of Hitler to cure that.”

How All 50 States Got Their Names Alabama Before Europeans landed on American shores, the upper stretches of the Alabama River in present-day Alabama used to be the home lands of a Native American tribe called – drum roll, please – the Alabama (Albaamaha in their own tribal language). The river and the state both take their names from the tribe, that's clear enough, but the meaning of the name was another matter. Despite a wealth of recorded encounters with the tribe – Hernando de Soto was the first to make contact with them, followed by other Spanish, French and British explorers and settlers (who referred to the tribe, variously, as the Albama, Alebamon, Alibama, Alibamou, Alibamon, Alabamu, Allibamou, Alibamo and Alibamu) – there are no explanations of the name's meaning in the accounts of early explorers, so if the Europeans asked, they don't appear to have gotten an answer. An un-bylined article in the July 27, 1842 edition of the Jacksonville Republican put forth the idea that the word meant “here we rest.” Alaska

Mapping journeys of inquiry through the year: emergent, flexible and connected. — Kath Murdoch I was recently rummaging through some old papers and came across a program I had helped a school create many (MANY) years ago. It was an impressive document in its day. A carefully organised sequence of units under ‘topic’ headings.

Kronstadt Uprising – Seventeen Moments in Soviet History Texts Images Video Other Resources Subject essay: James von Geldern The naval base of Kronstadt lies on Kotlin Island near the head of the Gulf of Finland. Forty Remarkable Native American Portraits by Frank A. Rinehart from 1899. - Flashbak Flashbak Frank Albert Rinehart was born in Lodi, Illinois in 1861. At some point in the 1870s he and his brother moved to Colorado and started working at a photography studio in Denver. When he was about twenty, Frank and his brother formed a partnership with the famous Western photographer William Henry Jackson. It was under Jackson that Rinehart perfected his, not inconsiderable professional photography skills. However Frank also became particularly interested in Native American culture.

This article found on facinghistory.org, connects with the book Unwind by Neal Shusterman in the way of stereotypes. The article talks about the different types of prejudices that are out there and why we judge others. Some of them are common and some of them are not. Some of them are also placed throughout Unwind. One of the first that we see is towards teenagers. If a teenager puts one toe out of line or does one bad thing, the adults look down upon that teen with disgust and will most likely have them unwound if they are that adult's child. The other stereotype I have seen in the book is religion. One of the kids is a tithe and it is his religion to believe that it is okay to unwond and spread across a number of people to help them. Most of the other unwinds think that is stupid and that, despite the tithe's religion, they shou;d want to be unwound. Tithes are a hated group among unwinds, but loved by the adults who are unwinding them. by taracappellucci Apr 23