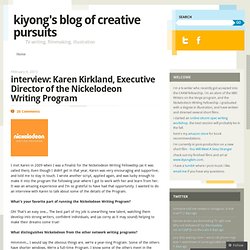 Even though I didn’t get in that year, Karen was very encouraging and supportive, and told me to stay in touch. I wrote another script, applied again, and was lucky enough to make it into the program the following year where I got to work with her and learn from her. Out of print writing. Cara Ellison » January: Storm Weather. The year has been wiped clean again; when it rains now I think about going outside to kick around in it instead of staying in stasis with my 3DS and Hakuoki. 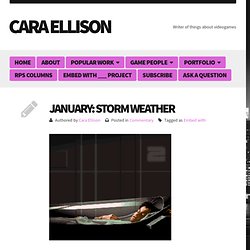 But I don’t go outside. I am thinking about how I have to leave home soon. I had an idea: to write about people who make games. Not the process itself, or games as ‘products’. To boy or not to boy. On top of the editing (which I'm trudging through, I swear. 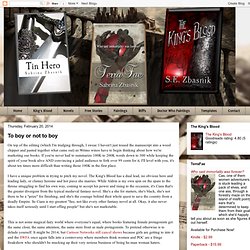 I haven't just tossed the manuscript into a wood chipper and pasted together what came out) us Wrimo winos have to begin thinking about how we're marketing our books. If you're never had to summarize 100K to 200K words down to 300 while keeping the spirit of your book alive AND convincing a jaded audience to fork over 99 cents for it, I'll level with you, it's about ten times more difficult than writing those 100K in the first place. I have a unique problem in trying to pitch my novel. The slack daily. A ton of useful information about screenwriting from screenwriter John August. Introverted Wife. Blog : Mary Jo Pehl. Sooooo… the idea was that whenever we were invited to someone’s home for dinner or a party, I’d have cute odds and ends trays and dishes with which to bring food. 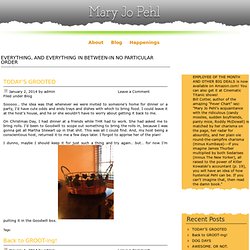 Radio theater: This is a casting call. This is something I’ve been thinking about and planning for years, and now it is a thing that is happening. 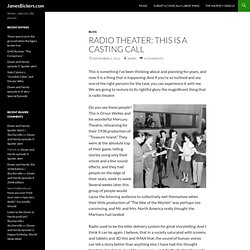 And if you’re so inclined and are one of the right persons for the task, you can experience it with me. By Ken Levine. Neil Gaiman's Journal. Nina Bargiel. Caissie's Thing. I posted this to my Facebook account a few days ago & I’m posting it here too, in case anyone who subscribes to this Tumblr, but isn’t my friend on Facebook, is interested. 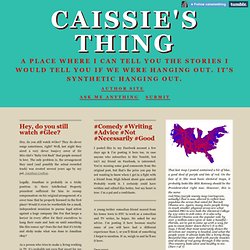 You’re missing some good comments from the original post, but that’s the price you pay for not wanting to know when I get in a fight with a friend from High School about gun control! Probably worth it. I certainly could have written and edited this better, but my heart is true. Mort Sahl: The Loyal Opposition. During the production and research phase of my film The Great Standups, I became fascinated with Mort Sahl. 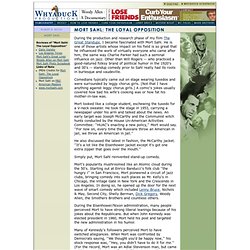 He is one of those artists whose impact on his field is so great that he influenced the work of virtually everyone who came after him, the same way Charlie Parker had such a seminal influence on jazz. Other than Will Rogers -- who practiced a good-natured folksy brand of political humor in the 1920’s and 30’s -- standup comedy prior to Sahl really had its roots in burlesque and vaudeville. Comedians typically came out on stage wearing tuxedos and were surrounded by leggy chorus girls. (Not that I have anything against leggy chorus girls.) A comic's jokes usually covered how bad his wife's cooking was or how fat his mother-in-law was. Kelly Carlin's Polymind. Siren of She An age. 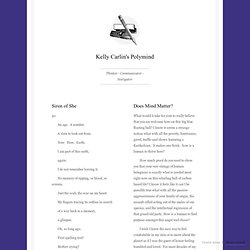 The WEEKLY DICTATOR. 9 steps to writing dialogue with rich subtext. A writing friend asked the other day, how do you write dialogue with strong subtext. 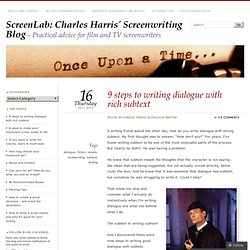 My first thought was to answer, “How don’t you?” For years, I’ve found writing subtext to be one of the most enjoyable parts of the process. But clearly he didn’t. He was having a problem. He knew that subtext meant the thoughts that the character is not saying – the ideas that are being suggested, but not actually voiced directly, below (sub) the text. Be a subtext detective – Sherlock Holmes Sign of Four (Muse Distribution International) Winifred Greenwood: 'Versatile Artist of the Silent Drama' Winifred Greenwood toured in vaudeville, performed in musical comedies, and did dramatic stock work before joining the film world. 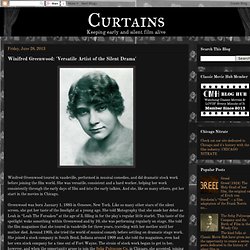 She was versatile, consistent and a hard worker, helping her work consistently through the early days of film and into the early talkies. And she, like so many others, got her start in the movies in Chicago. Greenwood was born January 1, 1885 in Genesee, New York. Like so many other stars of the silent screen, she got her taste of the limelight at a young age.  The official website of the writer Matt Debenham, author of THE BOOK OF RIGHT AND WRONG. Apr 16th, 2014 ASSIGNED READING: William Trevor’s “On the Streets” (Part 1 of 3) New feature! Going through a piece of writing, workshop-style, and taking it apart to see how and why it works. Welcome to Assigned Reading! Mar 21st, 2014. The Conundrum of Men in Capes. Superman was always my favorite superhero. There was always a lost operatic elegance to his story in my opinion. Yes, he saves cats from trees and helps old ladies cross the street, but he is alone among us.