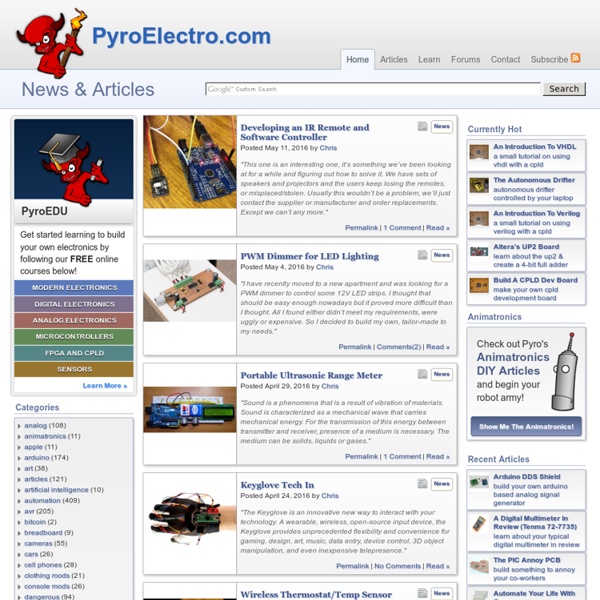 DVD Training 12: Blender for 3D Printing - Blender Store By Dolf (Macouno) Veenvliet. Blender already supports 3D printing modeling and file-formats since 2002. With the latest Blender version (2.67) this now is even more accessible and powerful with the new 3D Printing Toolbox and real-time Mesh Analysis features. This Training DVD is for everyone who is into 3D printing, beginners and professionals alike. PLY90 - Ply Products What is the PLY90? The PLY90 is a patent pending connector that is a faster, better looking alternative to drilling and screwing projects together.Save time and energy by not having to align every board and precisely drill and screw all the pieces togetherYou can focus on the design of your creation using a standard construction methodEasily disassemble creations for storage or moving, recycle old projects into new ones What type of materials does the PLY90 bracket work on? The PLY90 bracket has two included screws that allow it to work with all sheet materials/plywood between .450-.755”.

PWM - Pulse Width Modulation for DC Motor Speed and LED Brightness Pulse-width modulation is a digital technique for varying the amount of power delivered to an electronic component. By adjusting the amount of power delivered to a motor or LED, the speed or brightness (respectively) can be controlled. To me, the simplest and most flexible PWM is generated by a microcontroller. However, some people aren’t comfortable programming a microcontroller.

20 Arduino Projects Of 2012 While looking for ideas for new some new project I noticed there aren’t many lists of Arduino projects online so I decided to make one and in the last few days I’ve been carefully digging Reddit (r/Arduino) and the Arduino forum until I ended up with a list of 20 Arduino projects. All the projects in this list follow two simple criteria: They’ve been published/released in 2012.They provide quite detailed info (the more the better). The second criteria forced me to discard some amazing projects, but I didn’t want this post to be a simple showcase of cool Arduino projects, I wanted it to be an useful reference for Arduino users. 20. arduino-l3dgecomm Arduino Simulation with Proteus - YouSpice, SPICE simulation community We 'll show how to simulate the celebrated open-source electronics prototyping platform Arduino with Proteus .You can find other informations, project files and arduino software at its homepage. Let 's run ISIS Schematic: To simulate the core of Arduino platform we need only a few components: the atmega328P Microcontroller, a Crystal and two Capacitors.Let' s look for these devices in the library: Click on "P" button and write atmega as keyword: Double click on the model and this appears under Devices panel:

A newbie's guide to UAVs What is an amateur UAV? An Unmanned Aerial Vehicle (UAV) is an aircraft that has the capability of autonomous flight, without a pilot in control. Amateur UAVs are non-military and non-commercial. They typically fly under “recreational” exceptions to FAA regulations on UAVs, so long as the pilots/programmers keep them within tight limits on altitude and distance. Usually the UAV is controlled manually by Radio Control (RC) at take-off and landing, and switched into GPS-guided autonomous mode only at a safe altitude.

20 Arduino Projects Of 2013 The world is full of incredible makers which make new amazing things with Arduino every day and I think that collecting and showcasing the most interesting ones can be truly inspirational, especially for people who just started with Arduino or are planning to start soon. In this post, which follows the very popular 2012 edition, I collected 20 amazing Arduino projects of 2013 carefully selected after digging the web for days. All the projects in this list follow two simple criteria: Building MirrorMirror A Raspberry Pi powered Magic Mirror A magic mirror is a raspberry pi powered monitor behind a double sided mirror. A mostly black web page allows you to add some widgets to the mirror’s reflection as if by magic. This version includes widgets for displaying the weather forecast, the date/time and a nice randomly generated greeting. No low level hardware hacking required, just some basic woodworking and some code I’ve already put together. What you’ll need

Circuit Simulator Applet This is an electronic circuit simulator. When the applet starts up you will see an animated schematic of a simple LRC circuit. The green color indicates positive voltage. The gray color indicates ground. A red color indicates negative voltage. The moving yellow dots indicate current. Projects and Learning Approaches - Maker Ed's Resource Library “Projects & Learning Approaches” includes a wide variety of information, meant to provide educators and facilitators with ideas for short-term activities as well as open-ended long-term projects, curriculum samples, examples of facilitation methods and practices, and the pedagogies and values aligned with making. The resources below are listed in alphabetical order, as a default. They are also organized into subcategories, accessible by the tabs at the top of the grid. When hovering over each box, keywords provide a simple description and glimpse into the content of the resource, which is accessible by clicking on the arrow in the upper right-hand corner. Filter - All Getting Started

SPICE Simulation Community - YouSpice Welcome to the SPICE Simulation Community Welcome to the SPICE community for electronics design and simulation. Register and start now to download free SPICE projects, sale or share your simulated projects. READ MORE or click on the slide image to watch a 5 minute video tour. Read more FISHINO: Arduino becomes wireless Why “Fishino” ? The names comes to a joke made on April Fools’ Day (in Italian “Pesce d’Aprile“, and ‘Pesce‘, which sounds ‘pashe’ means Fish) made on an Arduino forum where we “presented” a new board named “Fishino Zero” which had revolutionary technical specs. The symbol, placed on board’s picture with a graphical editor, was the small fish which became the actual logo.

B9Creator Sales The B9Creator™ can build objects as large as belt buckles or as detailed as a tiny filigree ring, with precision typically possible only on machines costing three to five times as much. In addition, because DLP technology exposes an entire build layer at a time, total build times for most objects is normally between two to five times faster than other comparable technologies. Another unique advantage of this system is that the output resin, unlike that of photo-polymers in general, is proven to be directly castable when cured properly. The ring (at right) was created in Rhinoceros and printed on the B9Creator, the first of a three-ring set.

Lifelong Kindergarten Hal Abelson, Eric Klopfer, Mitchel Resnick, Andrew McKinney, CSAIL and Scheller Teacher Education Program App Inventor is an open-source tool that democratizes app creation. By combining LEGO-like blocks onscreen, even users with no prior programming experience can use App Inventor to create their own mobile applications. Currently, App Inventor has over 2,000,000 users and is being taught by universities, schools, and community centers worldwide.