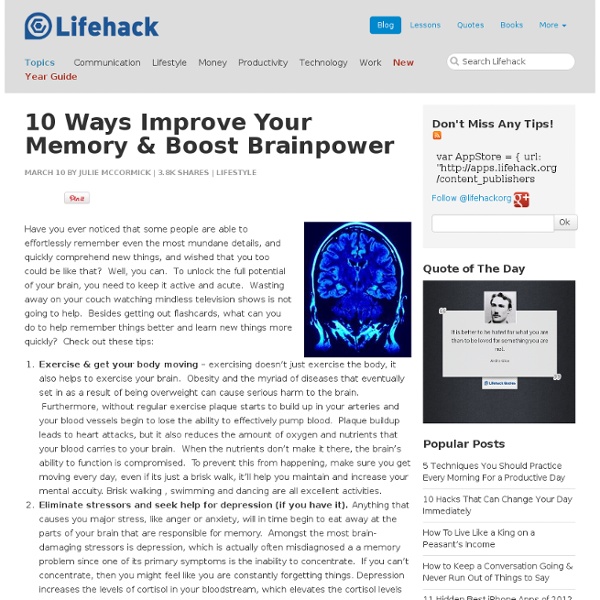 Have you ever noticed that some people are able to effortlessly remember even the most mundane details, and quickly comprehend new things, and wished that you too could be like that? Well, you can. To unlock the full potential of your brain, you need to keep it active and acute. Wasting away on your couch watching mindless television shows is not going to help. Besides getting out flashcards, what can you do to help remember things better and learn new things more quickly? Exercise & get your body moving – exercising doesn’t just exercise the body, it also helps to exercise your brain. What are some tips or tricks you have food to increase your memory and keep your brain sharp? pts to others

Close the Book. Recall. Write It Down. - Chronicle.com By DAVID GLENN That old study method still works, researchers say. So why don't professors preach it? The scene: A rigorous intro-level survey course in biology, history, or economics. You're the instructor, and students are crowding the lectern, pleading for study advice for the midterm. If you're like many professors, you'll tell them something like this: Read carefully. That's not terrible advice. Two psychology journals have recently published papers showing that this strategy works, the latest findings from a decades-old body of research. Yet many college instructors are only dimly familiar with that research. Don't Reread A central idea of Mr. "When you've got your chemis-try book in front of you, everything's right there on the page, it's all very familiar and fluent," says Jeffrey D. "So you could say to yourself, 'Yeah, I know this. These findings about active recall are not new or faddish or parochial. After a decade of working in this area, Mr. Among other things, Mr. Mr. Mr.

Learn to Remember Everything: The Memory Palace Technique I'm working on an ebook about memory techniques. If you are interested in knowing when it is ready, be sure to subscribe to our newsletter! In this post I'll teach you how to have perfect recall of lists of items. Length is not much of an issue, it can be your shopping list if 10 items or it can be a list with 50, 100 or even 1000. And in a forthcoming post I'll show you how you how to apply this technique to learning new languages. The technique we'll be learning is called the memory palace, and is also known as the method of loci (for the latin word locus meaning place) and also the mind palace. The memory palace The memory palace technique began in the 5th century B.C., when Simonides of Ceos, poet, was attending an unfortunate banquet in Thessalia. Think about it: It is not hard to remember who sits beside the host, where your friends sit, who is beside them and so on. The memory palace is well suited to how our brains have evolved. Your first memory palace: building and filling

10 ways to improve your observation skills (and your career), part III | Fast Track Tools by Ken Revenaugh How did you do on the observation test? If you found your observation skills lacking, it may be something to consider working on, as… For people who plan to become the leaders of tomorrow, developing a keen sense of observation is a must. The crux of the technique lies in simply keeping your eyes and ears open at all times and never failing to register what you see or hear. Some great habits that can help you build your observation skills are: Trying to look at every day life in a clear manner. Andrew Cox suggests these ten behaviors and habits of thought critical for developing accurate observation skills: Sizing up people – people watching Clarity – seeing the world as it is Curiosity – asking why Listening skills Willingness to set aside personal biases Willingness to seek the inputs of others Seeking out new experiences and possibilities Being comfortable with ambiguity Knowledge of the behaviors and attitudes of people

History of the world World population[1] from 10,000 BCE to 2,000 CE. The vertical (population) scale is logarithmic. The history of the world is the history of humanity, beginning with the Paleolithic Era. Distinct from the history of the Earth (which includes early geologic history and prehuman biological eras), world history comprises the study of archaeological and written records, from ancient times on. Ancient recorded history begins with the invention of writing.[2][3] However, the roots of civilization reach back to the period before the invention of writing. Prehistory begins in the Paleolithic Era, or "Early Stone Age," which is followed by the Neolithic Era, or New Stone Age, and the Agricultural Revolution (between 8000 and 5000 BCE) in the Fertile Crescent. Outside the Old World, including ancient China[27] and ancient India, historical timelines unfolded differently. Prehistory[edit] Early humans[edit] Rise of civilization[edit] Ancient history[edit] Timeline[edit] Cradles of civilization[edit]

8 Things Everybody Ought to Know About Concentrating - StumbleUpon “Music helps me concentrate,” Mike said to me glancing briefly over his shoulder. Mike was in his room writing a paper for his U.S. History class. On his desk next to his computer sat crunched Red Bulls, empty Gatorade bottles, some extra pocket change and scattered pieces of paper. In the pocket of his sweat pants rested a blaring iPod with a chord that dangled near the floor, almost touching against his Adidas sandals. On his computer sat even more stray objects than his surrounding environment. Mike made a shift about every thirty seconds between all of the above. Do you know a person like this? The Science Behind Concentration In the above account, Mike’s obviously stuck in a routine that many of us may have found ourselves in, yet in the moment we feel it’s almost an impossible routine to get out of. When we constantly multitask to get things done, we’re not multitasking, we’re rapidly shifting our attention. Phase 1: Blood Rush Alert Phase 2: Find and Execute Phase 3: Disengagement

How to Disagree March 2008 The web is turning writing into a conversation. Twenty years ago, writers wrote and readers read. The web lets readers respond, and increasingly they do—in comment threads, on forums, and in their own blog posts. Many who respond to something disagree with it. That's to be expected. The result is there's a lot more disagreeing going on, especially measured by the word. If we're all going to be disagreeing more, we should be careful to do it well. DH0. This is the lowest form of disagreement, and probably also the most common. u r a fag!!!!!!!!!! But it's important to realize that more articulate name-calling has just as little weight. The author is a self-important dilettante. is really nothing more than a pretentious version of "u r a fag." DH1. An ad hominem attack is not quite as weak as mere name-calling. Of course he would say that. This wouldn't refute the author's argument, but it may at least be relevant to the case. DH2. DH3. DH4. DH5. DH6. What It Means Related: