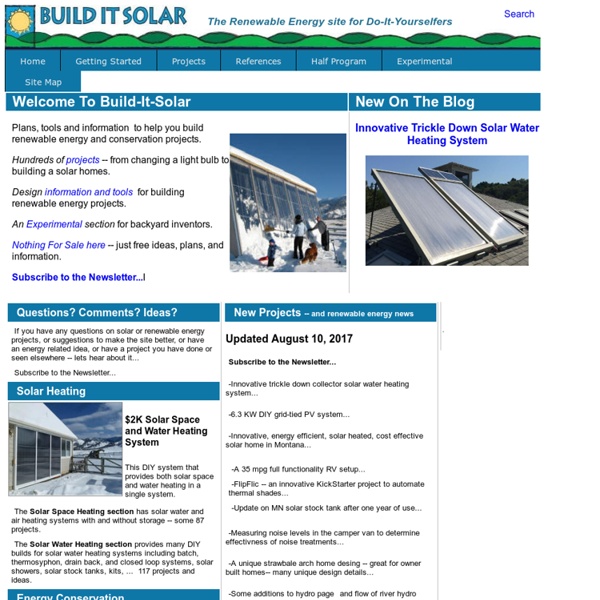 Off Grid Solar Living: Lessons in Energy Efficiency This story is meant to provide information about off grid living, meant to teach you or inspire you. I get a lot of people that ask me ‘What’s it like to live off the grid?’ I think a lot of people picture us huddled around a candle in darkened cabin in the middle of the woods.

Mass-produced, printable solar cells enter market and could change everything Australian solar power experts making up the Victorian Organic Solar Cell Consortium have developed and begun to market solar cells that are created with a 3D printer. The group, consisting of scientists from the CSIRO, the University of Melbourne and Monash University have been working on the technology for over seven years and have figured out a way to cheaply print the panels onto plastic, including smart-phones and laptops, enabling self charging electronics. They are also able to print directly on to walls and windows using an opaque solar film and claim that they can line a skyscraper with panels, making it totally electrically self sufficient.

New Catalyst Lets Us Store the Power of the Sun In Brief Scientists have found a way to “crack” water three times more efficiently using solar- and wind-generated electricity, which means it’s possible to store renewable energy for later use. Rainy Day Energy One of the problems with using renewable energy sources is that you’re overly dependent on the fickle whims of weather. This Striking Chart Shows Why Solar Power Is Taking Over The World Over the past few years, many graphs have been worth thousands of words on the rise of solar power. It's almost impossible to overstate how important the revolution that is happening right now is, and like most transitions, most people will only realize what's going on after it's mostly over. But not you guys and gals, you are ahead of the curve, and you're grasping the importance of all this. In fact, I'm sure that many of you are driving this progress forward and helping it happen! The chart above clearly shows that all of the solar power that we've installed on the planet until about 10 years ago basically didn't amount to anything compared to what has been built in recent years. At some magical threshold, the price of solar per watt (in orange) hit some tipping point and installation exploded (the blue part), dwarfing anything from the past.

South African team may have solved solar puzzle even Google couldn't crack It is a problem that has so far stumped even Google’s brainy engineers – how to generate cheap solar electricity using a small-scale array of mirrors to concentrate the sun’s energy. Now a team at a South African university – led by a former Intel strategic planner – believes they have cracked it. Once they have completed a prototype system in October they have big plans for rolling out the technology.

Could this be the world's most efficient solar electricity system? A new solar electricity generation system that developers claim is the most efficient in the world, is being tested in South Africa’s Kalahari desert. The Swedish company behind the project - which combines military technology with an idea developed by a 19th-century Scottish engineer and clergyman - says it is on the verge of building its first commercial installation. In the remote Northern Cape province, huge mirrors reflect the sun across the brown Kalahari sand. 7th Grader mimics Nature 13 year old copies Nature to Improve Solar Performance Thirteen year old Aidan Dwyer was walking in the woods in Upstate New York in the winter and noticed a spiral pattern to tree branches. Aidan realized the tree branches and leaves had a mathematical spiral pattern that could be shown as a fraction.

Why 2015 may be remembered as a transformative year for how we get energy Construction takes place at Roha Dyechem solar plant at Bhadla, north of Jodhpur in the western Indian state of Rajasthan. (Money Sharma/AFP/Getty Images) The United States is on track to shut down a record amount of coal-fired power plants in 2015. The Solar Conundrum The Solar Conundrum: heat decreases the production of electrical energy in PV. Hybrid Vacuum Tubes.By efficiently drawing heat away from the solar panel for space heating, hot water, de-salination and cooling the photovoltaic cells are maintained at an optimum operating temperature. This results in significantly higher electrical output than standard photovoltaic panels.

Uruguay makes dramatic shift to nearly 95% electricity from clean energy As the world gathers in Paris for the daunting task of switching from fossil fuels to renewable energy, one small country on the other side of the Atlantic is making that transition look childishly simple and affordable. In less than 10 years, Uruguay has slashed its carbon footprint without government subsidies or higher consumer costs, according to the country’s head of climate change policy, Ramón Méndez. In fact, he says that now that renewables provide 94.5% of the country’s electricity, prices are lower than in the past relative to inflation. There are also fewer power cuts because a diverse energy mix means greater resilience to droughts. It was a very different story just 15 years ago.

Spherical Solar Solar Sphere Concentrated photovoltaic (CPV) technology never looked so good. The Rawlemon Solar Energy Generator was a finalist in the World Technology Network Award Dec, 2013. The inovative design is much more efficient than a flat pv panel as the round orb concentrates and tracks the sun's light. The inventor, German born, Barcelona-based architect André Broessel, with his first large scale prototype, which sits a top his Barcelona apartment building. Home battery storage to 'revolutionise' solar industry in Australia: Climate Council report posted Categories: Energy For custom Web design needs, call Tech Distress (Click Here)! When trying to choose the best energy solution for your off grid home, it is important to look at what is available in the market and weigh all the options, we need to take on account many factors before buying any kind of unit or energy system, whether it will be solar or other.

Nigerian Man Turns A VW Beetle Into A Solar And Wind Powered Car This is one of the coolest ideas and to top it off it’s completely reasonable too! Segun Oyeyiola was a student at Obagemi Awolowo University and while he was in attendance there, he converted his gas thirsty Volkswagen into a completely green energy machine by installing a large solar panel on the top of the car, with an additional wind turbine underneath the hood. His idea is to have his concept of his new invention to become “Nigeria’s future car.” At birth, the battery took 4-5 hours to charge, that was definitely not ideal. Yet the largest challenge, according to Mr.