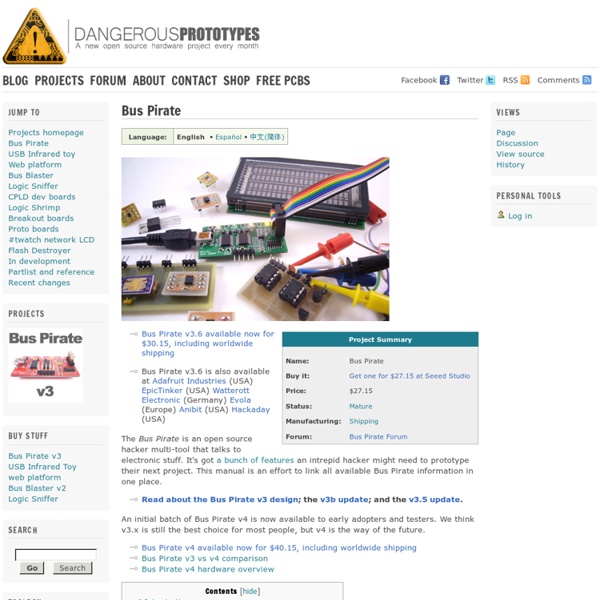 From DP Bus Pirate v3.6 available now for $30.15, including worldwide shipping Bus Pirate v3.6 is also available at Adafruit Industries (USA) EpicTinker (USA) Watterott Electronic (Germany) Evola (Europe) Anibit (USA) Hackaday (USA) The Bus Pirate is an open source hacker multi-tool that talks to electronic stuff. It's got a bunch of features an intrepid hacker might need to prototype their next project. This manual is an effort to link all available Bus Pirate information in one place. Read about the Bus Pirate v3 design; the v3b update; and the v3.5 update. An initial batch of Bus Pirate v4 is now available to early adopters and testers. Introduction Features Features overview (original) Hardware Tutorials Forums Bus Pirate forums Linux, OS X Download Although the primary target of community is to significantly improve the user experience for Bus Pirate v4, the Bus Pirate v3 support will be maintained at all costs (despite the difficulties while compiling with the recent MPLAB XC16 compilers) Mods Related:  micro controller stuff

Home - SD Association Dash: The DIY Robot Dash is the world's first lightning-fast origami robot that you can build yourself. Our animal-inspired design allows us to offer a fun, high performance robot at a price never before possible. It's a great educational tool for kids that want to get an early start in robotics, engineering, and biology, as well as a great platform for makers that want to dig in and explore the possibilities of a new paradigm in robotics. Because he has legs, Dash can run over all sorts of terrain, including rocks and gravel. And he is so tough that you can run him off of tables and he just keeps going! When you back us, you'll be getting more than just an awesome robot. "Dash is about radical innovation, the sort of progress that elicits an emotional 'whoa!'. -Patrick Scaglia, former CTO, HP “Dash is a fantastic product for the robot enthusiast or budding 'maker'. -Charles Huang, Inventor of Guitar Hero, CEO of Green Throttle Games ""Seeing Dash scramble across terrain brings a smile to your face.

How-to: Bus Pirate v1, improved universal serial interface We use the Bus Pirate to interface a new chip without writing code or designing a PCB. Based on your feedback, and our experience using the original Bus Pirate to demonstrate various parts, we updated the design with new features and cheaper components. There’s also a firmware update for both Bus Pirate hardware versions, with bug fixes, and a PC AT keyboard decoder. We cover the design updates and interface a digital to analog converter below. Concept overview The Bus Pirate started as a collection of code fragments we used to test new chips without endless compile-program-run development cycles. Surface mount designPull-up resistors on all bus lines with external voltage sourceSoftware resettable 3.3volt and 5volt power suppliesVoltage monitoring of all power suppliesAn external voltage measurement probeCheaper parts Hardware Click for a full size schematic image (PNG). Microcontroller We used a Microchip PIC24FJ64GA002 28pin SOIC microcontroller (IC1) in this project. RS-232 transceiver

Foundations of Signal Processing and Fourier and Wavelet Signal Processing :: Book Site Rotary encoder keypad kit 20X4 LCD - Liudr arduino and physics gadgets - InMojo Rotary encoder keypad kit 20X4 LCD Description This kit can be used on phi-panel backpacks or any 20X4 character displays. Includes: Laser-cut 3mm-thick glossy/matte black acrylic face plate with window to mount a 20X4 character LCD and a rotary encoder and push buttons. The picture showing LCDs and backpacks are for illustration only. Videos: The following features are made by sending text to the panel and the panel renders long messages, menus and dialogs. There are three face plate layouts for phi-panel backpacks. Downloads Shipping Options * shipping times are estimates. Community Feedback Kit (only 2 left!) - Ships in 3 - Includes everything except for the LCD or phi-panel backpack Note: If shipping internationally, special local taxes (VAT) and customs may apply and are not included in prices or invoices unless otherwise noted. Ships To Payment Methods

Raspberry Pi, mini computers, Android and microcontrollers General electronics Handling LCD displays via USB UART from your computer - How to control displays from computers via serial UART communications in PythonRemote programming of mini PC like Raspberry Pi or Beaglebone Black - How to use SSH, SSHFS and VNC/RDP to remotely programm and operate an mini PC from another PC. Micro Python and pyboard Micro Python and pyboard - a Python running on a microcontroller scripts your electronics - How doeas a Python works on a microcontroller and what features pyboard board can offer us? Raspberry Pi Benchmarking Raspberry Pi performance - How does Raspberry Pi compares to other computers in terms of performance? Other Single board computers Benchmarking Beaglebone Black single board computer - What capabilities and performance does Beaglebone Black offers to hardware hackers and makers? Android pyMCU Hardware Other boards

CPUs AMD hosted their quarterly earnings conference call this afternoon to announce their financial results for the quarter ending March 2014. While they still reported a GAAP loss of $20 Million ($0.03 per share), year over year results showed a strong revenue gain of 28% and a substantial 86% increase in net income (though still a small loss). AMD Q1 2014 Financial Results (GAAP) Q1'2014 Q4'2013 Q1'2013 Revenue $1.40B $1.59B $1.09B Net Income -$20M $89M -$146M Gross margins were 35% for the quarter which was flat compared to Q4 2013. These margins are in-line with AMD’s stated goals, and while they’d no doubt appreciate greater margins right now, the long term plan is to be profitable with these margins. Non-GAAP numbers were slightly higher, with a small profit of $12M, or $0.02 per share.

$300 Pick and Place / 3D printer In order for this project to be successful, we must define a set of criteria, and then break the problem down into a set of little problems that can be tackled, one by one. We chose a Delta robot configuration over a more conventional Cartesian design. This allows us more speed, less BOM cost going bearings and linear slides, and easier build / configuration. I've taken the RepRap philosophy to heart. I've designed FirePick Delta around the following parts: Roller bearings: Use primarily 608 for anything load-heavy. SMT parts are getting smaller and smaller every year. OPEN SOURCE vs. We will keep it open and pay it forward. {*style:<ul>*}{*style:<li>*}{*style:<a href=' - Is a project to create the plans, prototype and software for a completely Open Source SMT pick and place machine that anyone can afford.