14 things that are obsolete in 21st century schools 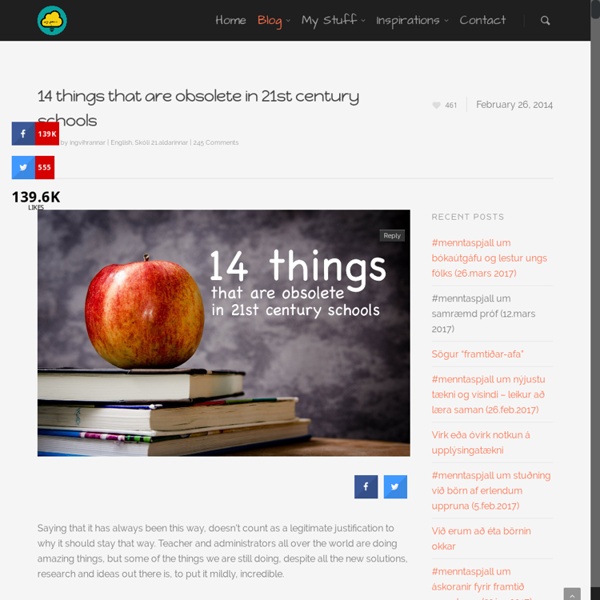 Saying that it has always been this way, doesn’t count as a legitimate justification to why it should stay that way. Teacher and administrators all over the world are doing amazing things, but some of the things we are still doing, despite all the new solutions, research and ideas out there is, to put it mildly, incredible. I’m not saying we should just make the current system better… we should change it into something else. I have compiled a list of 14 things that are obsolete in 21st century schools and it is my hope that this will inspire lively discussions about the future of education. 1. Computer Rooms The idea of taking a whole class to a computer room with outdated equipment, once a week to practice their typewriting skills and sending them back to the classroom 40 minutes later, is obsolete. Computers or technology shouldn’t just be a specific subject, that’s not sufficient anymore but rather it should be an integral part of all the subjects and built into the curriculum. 2. 3. 4.

Commenting is Dead. Chat is the New Black. — Affinity Networks Commenting is Dead. Chat is the New Black. How chat will overthrow comments on mobile in 2015 For a decade or more “commenting” has been the gold standard social engagement mechanism. From memes to monkeys — news, gifs, fails, celeb sightings, pets, food, fashion, photos — the list goes on. Commenting begin showing up on web as a way for users to respond to news and other text content. Google URL Shortener Posted by Michael Hermanto, Software Engineer, Firebase We launched the Google URL Shortener back in 2009 as a way to help people more easily share links and measure traffic online. Since then, many popular URL shortening services have emerged and the ways people find content on the Internet have also changed dramatically, from primarily desktop webpages to apps, mobile devices, home assistants, and more.

Six ways your tech is spying on you – and how to turn it off So, your TV might be spying on you. It probably just wanted to join in with the rest of the technology in your life, because let’s face it: if you live in the 21st century you’re probably monitored by half a dozen companies from the moment you wake up to the moment you go to sleep. (And if you wear a sleep tracker, it doesn’t even stop then.) Compared with some of the technology that keeps a beady eye fixed on you, the news that Samsung’s privacy policy warns customers not to discuss sensitive information in front of their smart TVs is actually fairly tame. Hacking Google – Or how to make a decent search It is funny that 95% of the people who use Google actually do not know how to use Google. You will say “Just type and press enter, what is there to know?” and you will be as wrong as possible. Google is a very sophisticated search engine and can give you information you never expected to get out of a search engine.

Why the modern world is bad for your brain Our brains are busier than ever before. We’re assaulted with facts, pseudo facts, jibber-jabber, and rumour, all posing as information. Trying to figure out what you need to know and what you can ignore is exhausting. At the same time, we are all doing more. Thirty years ago, travel agents made our airline and rail reservations, salespeople helped us find what we were looking for in shops, and professional typists or secretaries helped busy people with their correspondence. Now we do most of those things ourselves.

How to Boot From a CD or USB Drive on Any PC There's a very slim chance that your 486 would even be running Windows as it's OS, (there were a few models sold with quad-clocked processors running Win95 at most, or 98 if a user upgraded it) but probably as the old GUI (Win 3.1) to load over DOS (probably 6.xx) The F12 trick won't apply here. Try hitting DEL at post, or maybe the ESC key... or one of a slew of other F-keys that various motherboard manufacturers had assigned to pop up BIOS setup... watch the screen at boot, it should tell you what key to use, but this instructon will flash by you pretty quickly, so be quick) Once in Bios setup, mull around in there and find an option named like "Boot Order".

Global Digital Citizen Foundation The 21st Century Fluencies are not about hardware, they are about headware and heartware. We need to move our thinking beyond our primary focus on traditional literacy to an additional set of 21st-century fluencies that reflect the times we live in. That’s the essence of the 21st Century Fluencies! Today, it’s essential that all of our students have a wide range of skills that develop the ability to function within a rapidly changing society—skills far beyond those that were needed in the 20th century. How to Hide Your IP Address Subscribe to our newsletter and boost your IT I.Q. withIP news, hot tips, updates and more. Get yours today! We'll never share your address. You can opt out any time.This is a free publication. Paul Baran and the Origins of the Internet In 1962, a nuclear confrontation seemed imminent. The United States (US) and the Union of Soviet Socialist Republics (USSR) were embroiled in the Cuban missile crisis. Both the US and the USSR were in the process of building hair-trigger nuclear ballistic missile systems. Each country pondered post-nuclear attack scenarios. US authorities considered ways to communicate in the aftermath of a nuclear attack.

How Secure Is My Password? Entries are 100% secure and not stored in any way or shared with anyone. Period. As Seen On Creating and maintaining secure passwords can definitely be a hassle. One of the main reasons for creating this tool is to check to make sure you don’t get stuck in a rut using passwords that are easily cracked but rather, are using the best online password strategies. We can quickly tell you how secure your passwords are based on their lengths and the content of their characters. Facebook is terrifying – Alex Yumashev Founder's blog Feb 4 2017 :: by Alex Remember that last time you posted a picture on Facebook and it automatically offered to tag other people on the photo? Bursting the Facebook bubble: we asked voters on the left and right to swap feeds The 2016 election took place under the spectre of a bubble. Not the subprime mortgage lending bubble that shaped the 2008 election, but the “filter bubble”. Tens of millions of American voters gets their news on Facebook, where highly personalized news feeds dish up a steady stream of content that reinforces users’ pre-existing beliefs. Facebook users are increasingly sheltered from opposing viewpoints – and reliable news sources – and the viciously polarized state of our national politics appears to be one of the results. Criticism of the filter bubble, which gained steam after the UK’s surprising Brexit vote, has reached a new level of urgency in the wake of Donald Trump’s upset victory, despite Mark Zuckerberg’s denial it had any influence.

I was actually thinking the reverse had happened!! Definitely Term Two - best of luck with application - if you can capture the pride , passion and knowledge you showed yesterday then it will be hard to beat :) by milkinsk Apr 9

It was great to catch-up. Somethings never change - you're still the smartest person in the room. Let's catch-up again during Term 2. My shout for lunch. by markag Apr 9