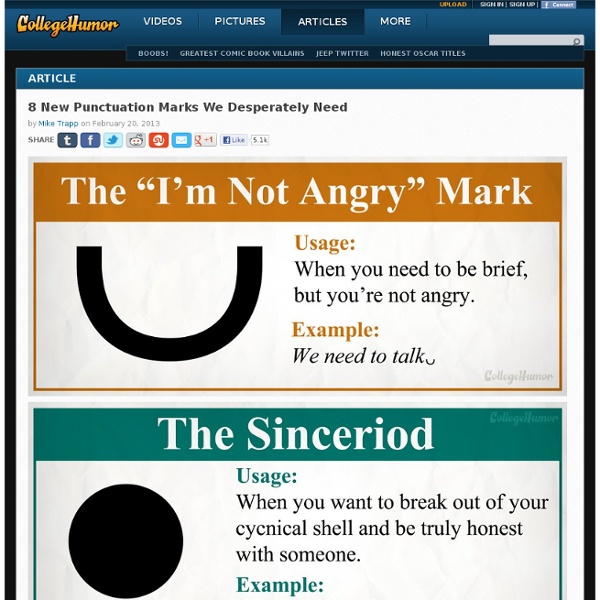 Young Artist Takes Surreal Self-Portraits to Express Emotions The mind can create all kinds of strange scenarios when we are asleep. In this series entitled Surreal-ity, photographer Kylie Woon brings those mind-bending stories and dreamy scenes to life. Conveying all kinds of dramatic emotions, including loss, fear, anger, and restlessness, Woon creates self-portraits where she floats, flips, and flies across each frame in seemingly impossible arrangements. The artist says her life has always flip-flopped between being obsessed with the small things in life versus being able to see the bigger, grander picture. My collection of funny emails from my inbox. Subject: 5 MINUTE MANAGEMENT COURSE Lesson 1: A man is getting into the shower just as his wife is finishing up her shower, when the doorbell rings.

12 Enjoyable Names for Relatively Common Things Fancy yourself a logophile ... and didn't have to look up "logophile"? See if you know these 12 words for common things. 1. The plastic table-like item found in pizza boxes is called a box tent and was patented in 1983. Most people in the biz now call it a pizza saver. 2. Groundbreaking Tower in Singapore is Draped in Greenery WOHA Architects are completely changing how skyscrapers are built with their Park Royal Tower in Singapore, which will feature twice as much greenery as the nearby Hong Lim Park. The high-end office and hotel tower features a podium absolutely overrun with vertical gardens, contoured green pathways, water features, and leafy terraces. When it is completed later this year, this groundbreaking project will boast a whopping 15,000 square meters of green space! Park Royal’s leafy podium on Pickering is designed to be a vertical extension of the Hong Lim Park right across the way and at 15,000 square meters of natural features, is twice as large! The contoured facade is planted with shade trees, palms, overhanging creepers and a variety of other plant species that not only disguise the above ground parking lot but also scrub the air clean of any emissions produced there. This isn’t a skyscraper.

How to make your lessons outstanding Kelly Wood is assistant head at Southdale C of E junior school in West Yorkshire and she ﻿won the Specialist Schools and Academies Trust Award for ﻿﻿﻿Outstanding New Teacher of the year ﻿﻿﻿in 2010. H﻿﻿﻿﻿﻿﻿﻿﻿﻿﻿﻿﻿ere Kelly shares some of her top tips for making your lessons outstanding. Give students ownership The Ultimate Guide to Writing Better Than You Normally Do. Writing is a muscle. Smaller than a hamstring and slightly bigger than a bicep, and it needs to be exercised to get stronger. Think of your words as reps, your paragraphs as sets, your pages as daily workouts. Top 40 Useful Sites To Learn New Skills The web is a powerful resource that can easily help you learn new skills. You just have to know where to look. Sure, you can use Google, Yahoo, or Bing to search for sites where you can learn new skills , but I figured I’d save you some time.

Everybody Jump What would happen if everyone on earth stood as close to each other as they could and jumped, everyone landing on the ground at the same instant? —Thomas Bennett (and many others) This is one of the most popular questions submitted to this blog. It’s been examined before, including by a ScienceBlogs post and a Straight Dope article. They cover the kinematics pretty well. 30 Books I'm Glad I Read Before 30 In various ways, these 30 books convey some of the philosophy of how Angel and I live our lives. I honestly credit a fraction of who I am today to each title. Thus, they have indirectly influenced much of what I write about on this site. A medley of both fiction and nonfiction, these great reads challenged my internal status quo, opening my mind to new ideas and opportunities, and together they gave me a basic framework for living, loving, learning and working successfully. If you haven’t read these books yet, I highly recommend doing so. They will enrich your library and your life.

How Much Sleep Do You Need? Sleep Cycles, Stages, & Lack of Sleep The power of sleep Many of us try to sleep as little as possible. There are so many things that seem more interesting or important than getting a few more hours of sleep, but just as exercise and nutrition are essential for optimal health and happiness, so is sleep. The quality of your sleep directly affects the quality of your waking life, including your mental sharpness, productivity, emotional balance, creativity, physical vitality, and even your weight. LOTS OF PUNS ...A guy goes into a nice restaurant bar wearing a shirt open at the collar and is met by a bouncer who tells him he must wear a necktie to gain admission. So the guy goes out to his car and he looks around for a necktie and discovers that he just doesn't have one. He sees a set of jumper cables in his trunk.

47 Mind-Blowing Psychology-Proven Facts You Should Know About Yourself I’ve decided to start a series called 100 Things You Should Know about People. As in: 100 things you should know if you are going to design an effective and persuasive website, web application or software application. Or maybe just 100 things that everyone should know about humans! The order that I’ll present these 100 things is going to be pretty random. So the fact that this first one is first doesn’t mean that’s it’s the most important.. just that it came to mind first. Dr.