Teach Yourself Programming in Ten Years 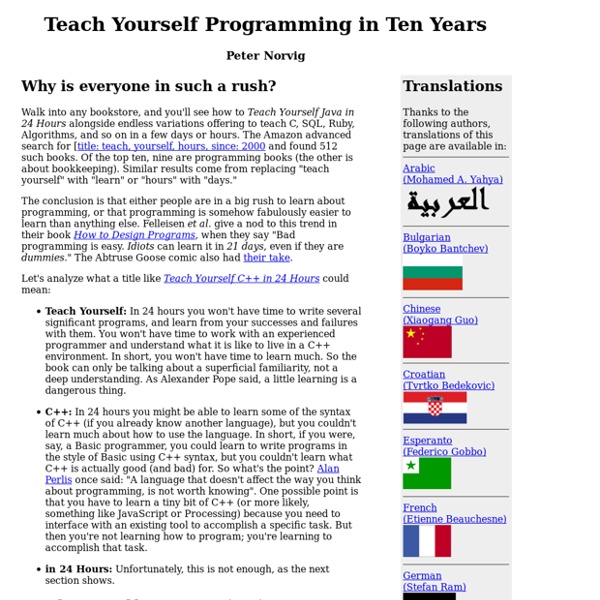 The Python Tutorial — Python v2.7.1 documentation Python is an easy to learn, powerful programming language. It has efficient high-level data structures and a simple but effective approach to object-oriented programming. Python’s elegant syntax and dynamic typing, together with its interpreted nature, make it an ideal language for scripting and rapid application development in many areas on most platforms. HOW TO: Use Google Reader Like A Rockstar Google Reader recently got a facelift; with a fresh look and features, a lot of people are buzzing about the service. Knowing that new users are signing up and veterans are looking for some ideas to make their experience even better, we have put together a quick how-to that should offer something for everyone. Tell us in the comments about what you do to get the most out of Google Reader! History of Google Reader When RSS became a standard for publishing material on the web, the way that we received our information changed very quickly. No longer did users have to go find content; now it could come to them automatically.

Become a Good Programmer in Six Really Hard Steps One of the more popular topics here on the GDNet forums goes something like this: "Hi, I just [bought a computer | wrote a simple game | discovered a game engine] and I want to know where to go from here. I'd like to [accomplish some particular goal] eventually. Programming Is Not Math « Sarah Mei When I learned to program, back when dinosaurs walked the earth and the internet had no cats, there was an idea: if you were good at math, you’d be good at programming. I was great at math as a kid, but perhaps because I didn’t like it much, no one steered me towards programming. I came to it accidentally, in college, when I took an elective programming class because it fit my schedule.

The Loginataka: Dialogue between a Guru and a Newbie Translations: Czech Speak, O Guru: How can I become a Unix Wizard? O, Nobly Born: know that the Way to Wizardhood is long, and winding, and Fraught with Risks. Thou must Attune thyself with the Source, attaining the arcane Knowledge and Conversation of the System Libraries and Internals. Yea; and such an all-consuming Time and Energy Sink is this as to greatly Imperil thy Grade Point Average (if one thou hast), not to mention thy Sex Life (if one thou hast).

53 Must See Websites! - MarketGid logo login Must See Websites! Beautiful sites for inspiration! How I Learned to Program Programming is, without a doubt, the most mentally rewarding thing I've ever done. Programming taught me that life should be fun, filled with creativity, and lived to the fullest. Programming taught me that anything is possible; I can do anything I want using only my mind. Programming also taught me that learning is fun. 27 Ways to Learn to Program Online Whether you are looking to switch careers and become a full-time programmer, want to try to build a website or app on the side, or are just looking to round out your skill set, learning to code has certainly been something a lot of people have started to do lately. And while being a programmer might not be for everyone, there is a lot to be said about gaining a better, more educated view of how all those pixels get moved around all those screens. Before we delve into our list of learning resources sites, we wanted to share some advice from Marissa Louie, a self-taught product designer for Ness Computing. A former startup founder, Louie told TNW that the hardest part of being self-taught – whether it’s design, programming, or any other discipline is, “gathering the courage. The most important barrier is just to overcome your fears” (she also said having the ability to follow instructions helps as well). 1.

On Pi Day, a serving of why we need math Posted: Friday, March 13, 2015, 1:08 AM By Darren Glass On Saturday, our Facebook feeds will be peppered with references to Pi Day, a day of celebration that has long been acknowledged by math fans and that Congress recognized in 2009. Every high schooler learns that pi is the ratio of the circumference of a circle to its diameter and that its decimal expansion begins 3.14 and goes on infinitely without repeating. Mathematicians love pi because there are many interesting facts surrounding it. Other people seem to get a kick out of dates that demonstrate patterns.

Some advices from one of Google's best hacker: how to learn to program in 10 years by PED Jan 1