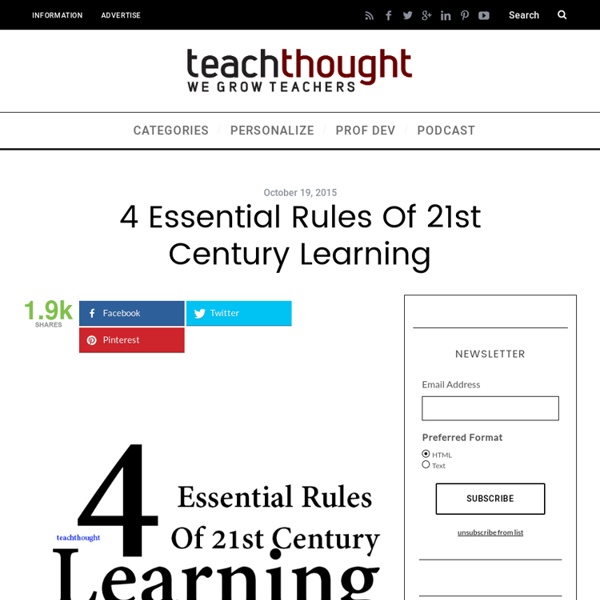 4 Essential Rules Of 21st Century Learning by Jennifer Rita Nichols The term “21st century” has become an integral part of educational thinking and planning for the future. Educators and administrators are actively searching for ways to prepare students for the future, and the educational system has been evolving faster than ever before. Various studies have shown us that rote memorization is not an effective learning strategy, and that teacher-centered classrooms may not be the most efficiently structured ones for student engagement. However, despite learning about the skills that students will need to develop to become successful in the 21st century, as well as what beliefs about education may be worth hanging onto or throwing away, schools and teachers are left trying to figure out what their role needs to be in the education of their 21st century students. Nowadays, we don’t live in the same world. So then, what is the role of education in the 21st century? Society has changed. 1. 2. 3.

Is 2016 The Year That Progressive Education Returns? - Is 2016 The Year That Progressive Education Returns? by Robert Sun The 1920’s were a high point in the Progressive Education movement. Developed in response to the rigid pedagogy of 19th Century industrial society—methods that stressed uniform learning largely defined by social class—Progressive Education sought to break the mold with a more enlightened approach to public schooling. Occam's razor - Wikipedia Philosophical principle of selecting the solution with the fewest assumptions Occam's razor, Ockham's razor, Ocham's razor (Latin: novacula Occami) or law of parsimony (Latin: lex parsimoniae) is the problem-solving principle that "entities should not be multiplied without necessity"[1][2] or, more simply, the simplest explanation is usually the right one. The idea is attributed to English Franciscan friar William of Ockham (c. 1287–1347), a scholastic philosopher and theologian who used a preference for simplicity to defend the idea of divine miracles. This philosophical razor advocates that when presented with competing hypotheses about the same prediction, one should select the solution with the fewest assumptions,[3] and that this is not meant to be a way of choosing between hypotheses that make different predictions. History[edit] Formulations before William of Ockham[edit]

Booktalks and Book Reports in a Digital Age Teens at the Silver Creek High School in Longmont, CO, record a scene for The Hunger Games book trailer using a makeshift green screen at their library’s maker space. Last fall, my school deployed iPads to every student (thanks to Race to the Top funds). My district also unveiled digital books using Overdrive. My school chipped in fund-raiser money to purchase online digital magazines using Zinio for libraries. With the acquisition of all this digital content, I have been wrestling with how best to display and promote these resources to our students. Supporting all of our readers (especially our struggling readers) is critical as we have seen a drop in our school-wide reading scores as of late.

What Achieving Digital Equity Using Online Courses Could Look Like By John Hansen and Justin Reich For almost a century, technology enthusiasts have promised that new innovations can democratize education. In 1932, Benjamin Darrow, founder of the Ohio School of the Air, argued that radio would “make universally available the services of the finest teachers.” In 1961, the Ford Foundation’s Teaching by Television report declared that TV would provide poor students with “instruction of a higher order than they might otherwise receive.” In our own time, advocates of online learning promise to level the educational playing fields with massive open online courses, MOOCs. The most compelling evidence for the democratizing power of MOOCs comes from a new generation of Horatio Alger stories, where the video lecture replaces the bootblack’s cloth.

The Death Of Expertise I am (or at least think I am) an expert. Not on everything, but in a particular area of human knowledge, specifically social science and public policy. When I say something on those subjects, I expect that my opinion holds more weight than that of most other people. I never thought those were particularly controversial statements.

The Difference Between Pedagogy, Andragogy, And Heutagogy The Difference Between Pedagogy, Andragogy, And Heutagogy by Terry Heick Jackie Gerstein’s passionate thinking about learning is some of my favorite to read. She is rarely pulled down by trend or fad, but is unquestionably progressive and forward-thinking in her approaches to learning and thinking about learning. She and I also share a passion: self-directed learning. (As does the original summarizer/author of the thinking embedded in table above, Lindy McKeown Orwin.)

9 ways to make education fit for the 21st century By 2040, many of the children born this year will be joining the workforce. The world they find will be very different from ours today. How we work and live will be shaped by artificial intelligence, autonomous vehicles, synthetic biology and many other emerging technologies. Education is key if we are to prepare students for the world of work, but are our education systems ready? In this time of fast-paced digital change, also known as the fourth industrial revolution, we need innovative places of learning that can provide the next generation with the skills of the future. This chart shows which countries are performing the best when it comes to pairing education with jobs in real life.

THE: Future perfect: what will universities look like in 2030? Recently the media had fun comparing the vision of life in 2015 depicted in the 1989 film Back to the Future Part II with the reality – with the internet being the glaring omission. But what if we were to try to predict the academy’s future? Could we do a more accurate job? An Unlikely Group Forms Unified Vision for the Future of Education Education has long been a hotly debated issue and with good reason — the policies and actions of education leaders affect our nation’s children, the future of the workforce and the day-to-day lives of families. But the struggle to improve the system has often left advocates in distinct camps, each believing that their solution, whether it be charter schools or blended learning or investing in teachers, is the best way to improve learning. That’s why it’s surprising to see a group of high-profile but strange bedfellows putting forward a new vision for learning, which they’re calling Education Reimagined.

Auntie Dogma's Garden Spot Perennial, Viola Tricolor Johnny Jump Ups are a popular viola. They are called “old fashioned” favorites. These perennials are often grown as an annual, especially in northern parts of the country.