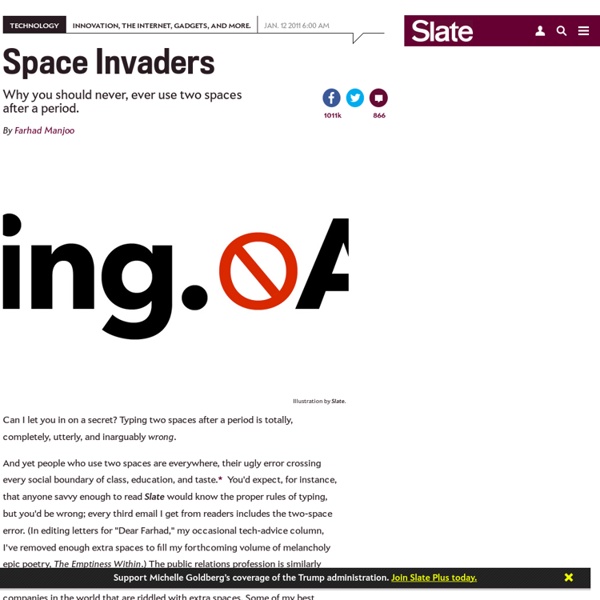 Illustration by Slate. Can I let you in on a secret? Typing two spaces after a period is totally, completely, utterly, and inarguably wrong. And yet people who use two spaces are everywhere, their ugly error crossing every social boundary of class, education, and taste.* You'd expect, for instance, that anyone savvy enough to read Slate would know the proper rules of typing, but you'd be wrong; every third email I get from readers includes the two-space error. A Slate Plus Special Feature: Never, ever use two spaces after a period: Listen to Mike Vuolo read Farhad Majoo’s classic takedown of an enduring typographic sin. What galls me about two-spacers isn't just their numbers. Typographers, that's who. Every modern typographer agrees on the one-space rule. Type professionals can get amusingly—if justifiably—overworked about spaces. This readability argument is debatable. But I actually think aesthetics are the best argument in favor of one space over two. Is this arbitrary?

Revolving around the Writing Revolution - Lingua Franca I’ve been following a raging debate in The Atlantic over the pedagogy of writing, a subject dear to my heart but clear as mud when it comes to formulating a position. The leadoff to the online debate, which continues through mid-October, was an article by the education reporter Peg Tyre about a new approach taken at Staten Island’s New Dorp High School. The follow-ups—more than a dozen as I write this—have been from people who have a stake in this matter of writing instruction. They range from the “Freedom Writer” diva Erin Gruwell to the president of Hampden-Sydney College. I recommend the series to Lingua Franca readers and hope that many will use this forum to articulate their takeaway from the debate; comments on The Atlantic site itself seem to be article-specific. Most people who write about writing are both passionate and competent writers themselves. That observation took me back to the original article, the only one that seems not to have been written by an advocate. Why not?

Essay on the flaws of distance education One potentially positive result of the current fascination with online education is that universities and colleges may be forced to define and defend quality education. This analysis of what we value should help us to present to the public the importance of higher education in a high-tech world. However, the worst thing to do is to equate university education with its worst forms of instruction, which will in turn open the door for distance learning. Perhaps the most destructive aspect of higher education is the use of large lecture classes. Although some would argue that we should prepare students for the new high-tech world of self-instruction, we still need to teach students how to focus, concentrate, and sustain attention. When people multitask, it often takes them twice as long to complete a task, and they do it half as well. This lack of presence also shows up in the classroom. (Illustration by Giulia Forsythe, licensed under Creative Commons Attribution-ShareAlike 2.5 agreement)

How to Build -- and Keep -- an Engaged Audience [INFOGRAPHIC] Every web publisher — and especially content marketer — yearns for an engaged and loyal audience. But with the sheer volume of noise, clutter and — well, content — online it can be hard to figure out how to reach people and keep them coming back for more. The content marketing agency BlueGlass knows a lot about how to do this well. Here are a few quick tips: Make sure you have a gripping headline, keep your copy to the point, make sure to provide value and promote, promote, promote. Why are these approaches so important? Check out the infographic below for the fuller picture. My fake college syllabus The following syllabus is for my new class, English 401: The Short Novel, meeting Tuesdays and Thursdays, 1:10-2:50pm. Course Description In this class, we will analyze some of World Literature’s greatest short novels in an attempt to interrogate the essence of plot and character while reading as few words as possible. Each class session will begin with a student presentation of 15 to 20 minutes, so we’re looking at an effective class time of about an hour. I’d love to give you a five-minute break halfway through the period, with the tacit understanding that we actually blow 15, but then I’d have to pretend I didn’t notice when 36% of you didn’t bother to come back. Or I’d have to pass around the attendance sheet again, which is a major pain in the ass. Books Course books are available at the campus bookstore. This semester, we’re going to try something different. Grading Policy My grading policy is to remain above the fray. Exams There will be a midterm and a final.

750 Words North Korea Being Reviewed By Smartasses On Google Maps True, but they have a great program to encourage return visitors. Tired of it just being a blank white space, Google added North Korea to their Google Maps service and invited "citizen cartographers" to look at satellite images and help map the hermit kingdom. Of course, since this is the Internet, people started reviewing gulags like they were hotels on Tripadvisor, and we couldn't be happier. Satellite images mean that the North is exposed for all to see, label, and attach snarky reviews to prison camps where thousands die every year. The Internet! Working together to bury tragedy with laughter. Chongjin is more of a Sandals couples-only gulag. Maybe the US & N.Korea should do an exchange program to thin/fatten each other. Sure, the US has toll booths and airport security, but does anyone really "check" anymore? Private Park's palms are pleasantly pliable, patiently patting your parts for pistols. Kim Jong Il's passing is referred to as "The Day The Gulags Died" and also every day.

This Isn't the Petition Response You're Looking For Official White House Response to Secure resources and funding, and begin construction of a Death Star by 2016. This response was published on January 11, 2013. By Paul Shawcross The Administration shares your desire for job creation and a strong national defense, but a Death Star isn't on the horizon. The construction of the Death Star has been estimated to cost more than $850,000,000,000,000,000. However, look carefully (here's how) and you'll notice something already floating in the sky -- that's no Moon, it's a Space Station! Keep in mind, space is no longer just government-only. Even though the United States doesn't have anything that can do the Kessel Run in less than 12 parsecs, we've got two spacecraft leaving the Solar System and we're building a probe that will fly to the exterior layers of the Sun. We are living in the future! If you do pursue a career in a science, technology, engineering or math-related field, the Force will be with us!

eclecticism, "Why do you hate the shape of breasts in plate armor so much?" Why Are LEGO Sets Expensive? | Wired Science I’m not sure I would say LEGO blocks are that expensive, but the statement is that they are expensive because they are so well made. Really, this has to at least be partially true. If you take some blocks made in 1970, they still fit with pieces made today. That is quite impressive. But the real question is: what is the distribution of LEGO sizes? Here is the plan. Here is my first set of data. These 88 measurements have an average of 15.814 mm with a standard deviation of 0.0265 mm. What about older LEGO pieces? Fortunately, I found one of my original sets from the late 70s. v I even have the instructions. The pieces from the 70s have an average of 15.819 mm with a standard deviation of 0.026 mm. How about something else? Maybe that wasn’t such a great plot. What About Other Objects? Do other things have high precision parts too? I found three different sets of objects to measure. There are these wooden planks that are used for building stuff. Price Per Piece of LEGO

Washington Post (Update: Second school joins protest, more background) Nearly all of the teachers at a Seattle high school have decided to refuse to give mandated standardized district tests called the Measures of Academy Progress because, they say, the exams don’t evaluate learning and are a waste of time. Now teachers at a second Seattle school, Ballard High, said they were joining the boycott, according to the Seattle Education website. Almost all of the teachers and staff at Garfield High signed a letter explaining that they oppose the MAP because it is a flawed test that students don’t take seriously and that is being used by administrators to evaluate teachers, a purpose for which it was not designed. According to Monty Neill, executive director of FairTest, an organization devoted to stopping the misuse of standardized tests, the boycott is the first such school-wide effort in the country in a decade. We, the Garfield teachers, respectfully decline to give the MAP test to any of our students.

Five organisms with real super powers that rival their comic book counterparts There is no force more creative than the painstakingly slow process of evolution. Ever wanted to walk through walls? Naked mole rats can physically bore through concrete. How about fly? Some real super power are more super than others: 1. Bdelloid Rotifers. photo by Diego Fontaneto Around 80 million years ago, a small, unassuming group of metazoa decided that sex just wasn’t for them. Bdelloid rotifers are incredibly tough. Bdelloid rotifers’ super power appears when they recover from their dormant state. 2. Scaly-foot Snail. Rogue isn’t the only X-Man with an Earth-1218 counterpart. 3. What if your body wasn’t your own? How to describe Sacculina? Here’s where things get weird. Sacculina carcini. 4. Who wouldn’t want to be a shapeshifter? 5. What good is a super power without a compelling origin story? Unfortunately for would-be superheroes, exposure to high doses of radiation results in death and only rarely produces super powers. Whoa, whoa, whoa.