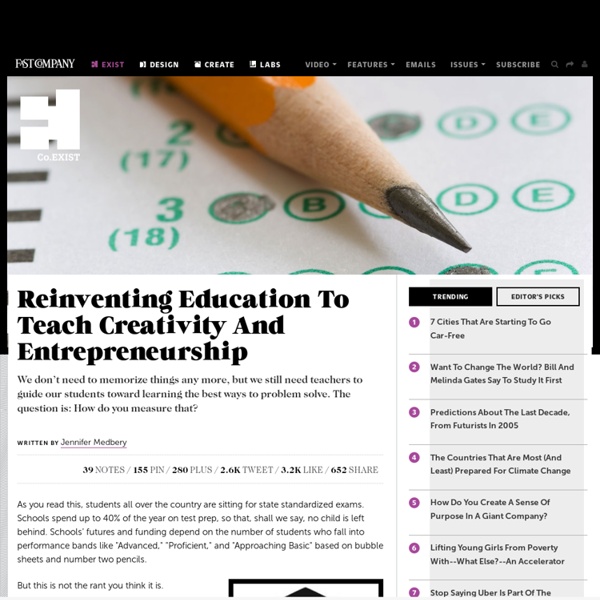 As you read this, students all over the country are sitting for state standardized exams. Schools spend up to 40% of the year on test prep, so that, shall we say, no child is left behind. Schools’ futures and funding depend on the number of students who fall into performance bands like "Advanced," "Proficient," and "Approaching Basic" based on bubble sheets and number two pencils. But this is not the rant you think it is. Let’s get one thing straight from the beginning: As a former high school teacher, I’m not opposed to standardized testing. Schools used to be gatekeepers of knowledge, and memorization was key to success. Given this argument, many entrepreneurs see a disruptive opportunity to "democratize" education, meaning that everyone now has a platform from which to teach, and anyone can learn anything anywhere anytime. Yet there is an inherent bias in the promise of these new platforms that favors extraordinarily self-directed learners. Which brings me back to my original point.

Corporate Education Reformers Plot Next Steps at Secretive Meeting February 5, 2012 | Like this article? Join our email list: Stay up to date with the latest headlines via email. Thursday, hundreds of state legislators from across the nation headed out to an "island" resort on the coast of Florida to a unique "education academy" sponsored by the American Legislative Exchange Council (ALEC). What is ALEC Scoring on Its Education "Report Card?" Little is known about the agenda of the ALEC education meeting that took place at the Ritz Carlton on Amelia Island. Imagine getting a report card from your teacher and finding out that you were graded not on how well you understood the course material or scored on the tests and assignments, but rather on to what extent you agreed with your teacher's strange public policy positions. The report card's authors are Matthew Lardner, formerly of the Goldwater Institute, and Dan Lips, currently of the Goldwater Institute and formerly of the Heritage Foundation. Ranking Policy, Not Performance

Deformed: Authoritarian undercurrents in education When education scholar Harold Berlak paid a visit to a Knowledge is Power Program (KIPP) charter school in San Francisco he was shocked. Berlak, an education reform skeptic, found a school that reminded him of a “humane, low security prison or something resembling a locked down drug rehab program for adolescents run on reward and punishments...” Berlak reported that the KIPP school resembled the scene out of Nathaniel Hawthorne's The Scarlet Letter, in which students “...who resisted the rules or were slackers wore a large sign pinned to their clothes labeled 'miscreant.'" Other researchers have noted the authoritarian nature of a KIPP education. Instead of fostering a life-long love of learning the KIPP model promotes an atmosphere of compliance, conformity and reverence. KIPP, a chain of about 100 charter schools, and its affiliated Educational Management Organizations (EMOs) are emblematic of the authoritarianism embodied in today's education reform movement.

Is Anti-Intellectualism As American As Apple Pie? - Paul Nevins cross-posted at politicsofselfishness.com The New York Times reported today that Republican Congressmen in a House sub- committee have voted to strip the EPA of its ability to regulate the emission of greenhouse gasses. It was also reported that Congresswoman Michele Bachmann introduced a bill last week to roll back efficiency standards for light bulbs, which include a phasing out of incandescent light bulbs in favor of more energy efficient bulbs. The opposition of mining and oil interests and manufacturers to any form of government regulation in the public interest, because it might impair their ability to maximize short-term profits, although deplorable, is perhaps understandable given the centrality of greed in our culture. Part of the explanation for this phenomenon problem has to do with general levels of literacy. Locke, it will be recalled, denied the existence of innate ideas.

Year-round school gains ground around U.S. - US news - Life - NBCNews.com Two days before Thanksgiving, the Indianapolis School Board will make a decision sure to heat up discussion around the turkey in just about every home with young children. That's when board members will vote on whether to adopt year-round classes. If the board approves the measure, Indianapolis pupils would go to school in cycles of eight to 10 weeks, with three to five weeks off after each, throughout the year. That would put them among the growing number of children around the nation who are going to school on so-called balanced schedules. Indianapolis Superintendent Eugene White said the schedule would add 20 class days every year, giving pupils more time to learn and shorter periods away from the classroom to forget what they've studied. That's important in a district criticized for low standardized-test scores and high dropout rates, said board member Annie Roof, because "what we are doing isn't working." 10 percent by 2012? Six years ago, that number was up to 2 million.

Year-round Schools Don't Boost Learning, Study Finds Students in “year-round” schools don't learn more than their peers in traditional nine-month schools, new research has found. A sociologist at Ohio State University found that, over a full year, math and reading test scores improved about the same amount for children in year-round schools as they did for students whose schools followed a traditional nine-month calendar. “We found that students in year-round schools learn more during the summer, when others are on vacation, but they seem to learn less than other children during the rest of the year,” said Paul von Hippel, author of the study and research statistician in sociology at Ohio State. The problem with year-round schools may be that they don't actually add more school days to the 180 typically required, von Hippel said. Instead of a three-month summer vacation, year-round schools typically have several breaks of three to four weeks spread throughout the year. “The results don't support that claim,” von Hippel said.

We need year-round school to compete globally Drop summer vacation, raise test scores? LZ Granderson: U.S. students ranked 17th in science, 25th in math in study of 34 nationsOnly 8 of the 34 countries have a lower high school graduation rate than U.S., he writes Reason for summer break, so kids could help on the farm, is obsolete, he says He says for U.S. to compete globally, we need year-round school, with mini-breaks Editor's note: LZ Granderson writes a weekly column for CNN.com. A senior writer and columnist for ESPN The Magazine and ESPN.com, he has contributed to ESPN's "Sports Center," "Outside the Lines" and "First Take." He is a 2010 nominee and the 2009 winner of the Gay and Lesbian Alliance Against Defamation award for online journalism and a 2010 and 2008 honoree of the National Lesbian and Gay Journalists Association for column writing. Grand Rapids, Michigan (CNN) -- As a nation, either our kids are getting dumber or everyone else's are getting smarter. LZ Granderson Granderson: Eliminate summer vacations Watching TV?

Big Study Links Good Teachers to Lasting Gain But controlling for numerous factors, including students’ backgrounds, the researchers found that the value-added scores consistently identified some teachers as better than others, even if individual teachers’ value-added scores varied from year to year. After identifying excellent, average and poor teachers, the economists then set out to look at their students over the long term, analyzing information on earnings, college matriculation rates, the age they had children, and where they ended up living. The results were striking. Students with top teachers are less likely to become pregnant as teenagers, more likely to enroll in college, and more likely to earn more money as adults, the study found. The authors argue that school districts should use value-added measures in evaluations, and to remove the lowest performers, despite the disruption and uncertainty involved. “The message is to fire people sooner rather than later,” Professor Friedman said.

What The US Could Learn From Finland About Education While observing recess outside the Kallahti Comprehensive School on the eastern edge of Helsinki on a chilly day in April 2009, I asked Principal Timo Heikkinen if students go out when it’s very cold. Heikkinen said they do. I then asked Heikkinen if they go out when it’s very, very cold. In his State of the Union address, President Obama outlined his plans for reforming U.S. public education, including distributing competitive grants, raising test scores, and holding teachers accountable for student achievement. Finland’s schools weren’t always so successful. Today, teaching is such a desirable profession that only one in ten applicants to the country’s eight master’s programs in education is accepted. Though, unlike U.S. education reformers, Finnish authorities haven’t outsourced school management to for-profit or non-profit organizations, implemented merit pay, or ranked teachers and schools according to test results, they’ve made excellent use of business strategies. Samuel E.

Chicago Is Focus of National Debate on Schools At stake are profound policy questions about how teachers should be granted tenure, promoted or fired, as well as the place standardized tests will have in the lives of elementary and high school students. One of the main sticking points in the negotiations here between the teachers union and Mayor Rahm Emanuel is a new teacher evaluation system that gives significant and increasing weight to student performance on standardized tests. Personnel decisions would be based on those evaluations. Over the last few years, a majority of states have adopted similar systems, spurred by the desire to qualify for the Obama administration’s Race to the Top education grants. Proponents say these measures are needed to improve teaching in a country where 33 percent of fourth graders are not reading at grade level and about one-quarter of public high school students do not graduate on time, if at all. That sentiment certainly permeated the picket lines and rallies in Chicago this week.

How to Fix the Schools It’s not just the school days that are being lost. Far more important, the animosity between the Chicago Teachers Union and Mayor Rahm Emanuel and his administration will undoubtedly linger long after the strike ends. The battle will end, but the war between education reformers and urban public schoolteachers will go on. Teachers — many of them — will continue to resent efforts to use standardized tests to measure their ability to teach. Tucker, 72, a former senior education official in Washington, is the president of the National Center on Education and the Economy, which he founded in 1988. “We have to find a way to work with teachers and unions while at the same time working to greatly raise the quality of teachers,” he told me recently. What is also a given in other countries is that teaching has a status equal to other white-collar professionals. Second, he believes that it makes no sense to demonize unions. High-performing countries don’t abandon teacher standards.