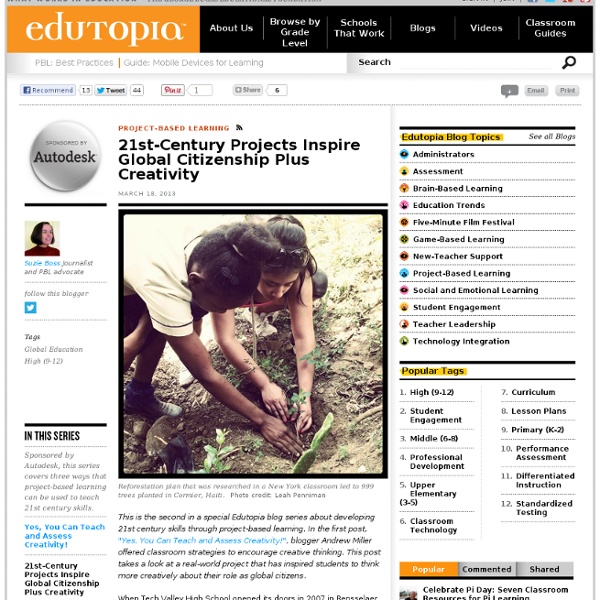 Reforestation plan that was researched in a New York classroom led to 999 trees planted in Cormier, Haiti. Photo credit: Naima Penniman This is the second in a special Edutopia blog series about developing 21st century skills through project-based learning. When Tech Valley High School opened its doors in 2007 in Rensselaer, New York, it offered students from across the state's Capital Region a chance to experience a different kind of public education. Those components recently came together in a project that took Tech Valley students to a rural village in Haiti, where they learned firsthand what it means to be creative -- and caring -- 21st century citizens. The Backstory Science teacher Leah Penniman regularly looks for opportunities to connect what her students are learning with real-world problems that they won't find in textbooks. Initially, Tech Valley students worked on difficult challenges from the comfort of their New York campus. A Project Takes Shape Thinking on Their Feet

» Digital Citizenship Is More Than Living By a Set of Rules I’ve avoided responding to an email from a school district leader asking for resources on digital citizenship that he can give a principal to work on developing. I could have shot him back a list of resources including a Symbaloo that I put together or a LiveBinder that dates back to 2010 but I didn’t. Of course anyone can Google those things. My fear is that no matter what I send, what will be extrapolated is a set of rules to implement. This fear reveals two things. The concept of digital citizenship continues to be refined. A slightly improved analogy is that teaching digital citizenship is like issuing a driver’s license. This last fall I came across a new metaphor that incorporates what past comparisons have been missing. Today I am really looking forward to the 3:00 SXSWedu session “How to Build a Culture of Digital Citizenship.”

The 5 Creepiest Foreign Versions of Disney Fairy Tales The Version You've Heard An evil queen desires to be the most beautiful woman in the land, but is thrown into a murderous frenzy when she learns that her stepdaughter, Snow White, is way more attractive. So she poisons Snow White with an apple, but Snow White is revived by the kiss of a handsome prince. Then the queen gets herself ghosted, and everyone lives happily ever after. Also, there are dwarfs. But in the Scottish Version A shamelessly vain queen named Silver-Tree learns from a trout in a well that her stepdaughter, Gold-Tree, ranks several notches higher on the beauty scale. Photos.com"Trust me on this; it's science." The king, understandably living in perpetual fear of his wife's irrationally blazing craziness, instead sends the daughter off to be married to a prince (because it's just that easy) and feeds evil Queen Silver-Tree the vital organs of a goat. And here's our favorite part: The prince, now with two fully functioning wives, boldly exclaims, "I shall have both of you!"

How to Renew Your Expiring Green Card: 5 Steps Edit Article Edited by Nicole, Teresa, Kanhu, Daisy and 3 others A Green Card is issued to a foreign national to prove that he is a lawful permanent resident in the US, authorized by the law to get an employment opportunity and live in the US on a permanent basis. Green Cards are issued with a validity of ten years. Hence, the holder must apply for Green Card renewal before his card could expire. Ad Steps 1Choose the right time to apply for renewal. 5Obtain a new green card.

Travel.State.Gov – US Passport Services Travel.State.Gov & U.S. Passport Services Individuals traveling outside of the United States must have a valid passport to enter other countries, even Canada and Mexico, despite being located on the same continent. This document is also required for individuals entering the country from other countries for travel purposes. Travel.State.Gov & Applying In/Out of the U.S. Those in need of a passport – or in need of a renewal – can do so online through the travel state gov website – or through any number of other official portals online. However, if you are submitting a passport application while in the U.S., you can do so through a “Passport Application Acceptance Facility” in your local area. As an aside, if you are behind on child support or have other federal debt, you may not be eligible for a passport until you clear up the matter. Passport Fees Fees for a passport depend on the type of passport and any extras that might be necessary to accompany the document. Passport Renewal

I-821D Form For Deferred Action Now Available Through USCIS | immigration-news The U.S. Customs and Immigration Services has released new information regarding the deferred action program, which will begin accepting applications on August 15, 2012. A nine-page instruction manual is now available on the USCIS website to help applicants through the deferred action process. It includes general application guidelines and detailed information on what constitutes proper documentation to prove identity, entry date into the United States, unlawful status in the United States, presence in the United States on June 15, 2012, school or army records and continuous residence in the United States for the past five years. The I-821D form for consideration of deferred action for childhood arrivals is also available on the USCIS website, and applicants can either type in their information and print out a completed form or print the form and fill it out by hand.