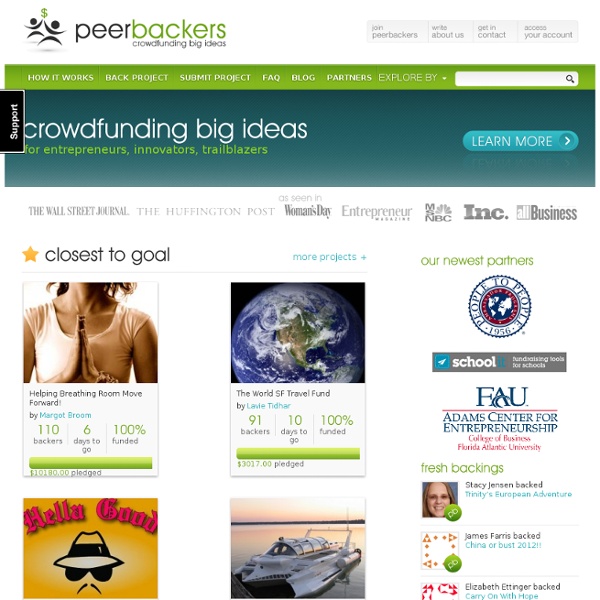 Crowd Investing The Journey to Legalize Crowdfunding Thanks to the support of people like you, all Americans will soon have the right to invest in startups they believe in. Congress just passed the CROWDFUND Act, allowing you to invest in what could be the next Facebook or own a piece of your local organic food market.

Crowd-funding Site Offers Open Alternative to Kickstarter Crowd-funding website Crowdtilt officially launched on Friday, expanding upon the collective fundraising model pioneered by Kickstarter to enable raising money for any project -- even a beer blitz. Like Kickstarter, Crowdtilt allows users to create a fundraising campaign with a tipping point. If the effort falls short of the set amount, would-be donors are not charged.

13 Crowdfunding Websites to Fund Your Business Who needs banks? Crowdfunding websites can help you find a community of small investors to fund your business, without the risks of traditional financing. Here is a list of crowdfunding sites. Some sites focus on funding creative projects, others sites focus on meeting specific needs in the marketplace or community. So don’t let access to capital hold you back — let the crowd fund you. 13 Crowdfunding Websites s Blog » Indie games as a business As Psychoavatar is winding up, I'm back into "business" mode. I have a good amount of experience in running Near Death Studios, so I know to avoid pitfalls like taking on too much overhead too early. I've also started considering business opportunities and haven't put marketing ideas off until the last minute. In my daily reading, I've been seeing more articles about independent game development, particularly about business. I figured I might discuss a few of those since I'm in a business-minded mood. First up is an interesting article in Develop magazine by Sophie Houlden entitled You Can Do It (pages 18-19).

Why open social collaboration platforms will disrupt the enterprise market in 2013 and beyond inShare427 Guest post by Sarah Evans (PRsarahevans), chief evangelist, Tracky, social correspondent at Sarah’s Faves and author of [RE]FRAME: Little Inspirations For A Larger Purpose The majority of businesses aren’t run efficiently and employees lack the tools and equipment necessary to do their jobs. Quite a wide sweeping statement, I know. But I’ve also been in the trenches. And I realize it’s not for lack of trying.

Crowdfunding Marketing How to crowdfund successfully : tips and secrets from SeedingFactory SeedingFactory has helped dozens of projects in Montreal & North America for thepast 2 years. We had our share of epic failures, as well as mega... Continue Reading → jump on opportunities Over 580 candles sold in 40 days! 225 supporters joined in the value of handicraft made ??in Italy! FAMO crowdfunding A Video Game Development Blog November 17th, 2008 Posted in Reviews, Featured | No Comments » A Digital Dreamer takes a close look at this gem of a PS3 game that every designer should take the time to play. We had heard a lot of great things about LittleBigPlanet for the Playstation 3 months before it was released. We heard things like the way the characters were designed and showed emotions brought instant smiles on the faces of pretty much anyone who had a chance to play it.

10 Crowdfunding Tips for Your New Product, Cause, or Creative Project On SEW we try to reserve Saturdays for non-search content that we still think is of interest to our readers. We've been getting excited about the potential of crowdfunding and so we asked a practitioner to share their strategy with you. Erick Mott is fresh from the field, having backed crowdfunding since 2011 and is in the process of completing a successful campaign on Indiegogo September 30th for his new product called the creatorstand. Whether you’re serving clients or leading an organization to launch a new product, cause, or creative project on the web – you’ll find these crowdfunding tips useful. What is Crowdfunding? Crowdfunding is a collaborative effort of individuals to pool resources, usually via the web, to support entrepreneurial, cause or creative projects initiated by other people, businesses, and community groups.

Crowd funding Crowdfunding is the practice of funding a project or venture by raising monetary contributions from a large number of people, typically via the internet.[1] One early-stage equity expert described it as “the practice of raising funds from two or more people over the internet towards a common Service, Project, Product, Investment, Cause, and Experience, or SPPICE.”[2] The crowdfunding model is fueled by three types of actors: the project initiator who proposes the idea and/or project to be funded; individuals or groups who support the idea; and a moderating organization (the "platform") that brings the parties together to launch the idea.[3] In 2013, the crowdfunding industry grew to be over $5.1 billion worldwide.[4]

Opinion: Indie Game Design Do-s and Don't-s: A Manifesto [Veteran indie game creator Edmund McMillen, known for his work on 2005 IGF Grand Prize winner Gish, Time Fcuk, and Super Meat Boy for WiiWare, shares his opinions and manifesto on making indie games, with 24 clear do-s and don't-s to make your art thrive.] One of the most common questions I'm asked in interviews is, "Do you have any advice for independent game developers who are new to the scene, or tips for developers in general?" Well, I actually answered it this time: I came up with this list of indie do-s and don't-s. Now, I'm going to make clear that I'm not perfect and I'm sure as the years go by this list will change. How to Attract Crowdfunding Investors Without Breaking the Law As the potential returns from crowdfunding go beyond free T-Shirts and movie passes, the rules were bound to get more complex. Last week, President Barack Obama signed into law the Jumpstart Our Business Startups Act, or JOBS Act. Though the law contains many parts that could free up funds for startups, the most anticipated measure among the entrepreneurial set is the crowdfunding provision that legalizes investing in startups by non-accredited investors. Formerly, only accredited investors -- typically wealthy individuals who can afford to make riskier bets -- could invest in pre-IPO companies. Though the prospect of being able to raise money from a bigger pool of investors is giving many entrepreneurs reason to salivate these days, the law stands to add a new level of complexity in the way companies market themselves to investors using crowdfunding. Related: The JOBS Act: What You Need To Know

5 Crowdsourcing Platforms Every Developer Should Know Marcus Thielking is the co-founder of skobbler, a leading provider of mobile map-based solutions. Follow the company at @skobbler. It can be easy to underestimate the time and effort that developers invest in creating many of today’s most popular apps or services. After all, these unsung heroes must navigate the challenge of building a great user experience while dealing with issues like funding. However, there are certain crowdsourced platforms that developers can use to address the quality of their product and the money they'll need to create it. These services can range from crowd-funding platforms to community data sets.

How Much Are Zynga's Users Worth Compared To Facebook And LinkedIn? Wall Street currently values Zynga (ZNGA) at $1.94 billion. For those of you who are new to this process you simply take the closing price times the number of shares outstanding ($2.47 x 783 million shares = $1.94 billion). Of the many questions asked about Zynga, one of the more common questions I hear is, "Is Zynga priced right?" Some people will tell you yes while others will tell you no, hence it is at these levels.

Consistently recognized as one of the top crowdfunding websites in the industry, peerbackers, which I co-founded and run, focuses on funding entrepreneurs and innovators. The platform has hosted thousands of creative, civic and entrepreneurial projects from around the world and recently expanded to include young entrepreneurs ages 13 to 17 through partnerships with student organizations. After seeing such a high industry failure rate for crowdfunding projects, peerbackers launched Crowdfunding Academy to offer education and support to those who want to crowdfund by dpvagabond Jun 30