Cuts are putting parks on 'road to ruin', say experts. Two prominent parks historians are warning that innovation and new income streams cannot rescue the parks sector from the funding crisis it faces - and that the sector must continue to fight for recognition from Government. 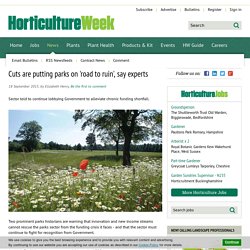 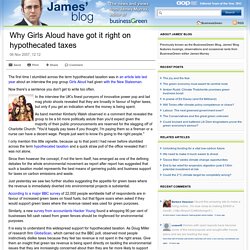 Now there's a sentence you don't get to write too often. In the interview the UK's finest purveyors of innovative power pop and lad mag photo shoots revealed that they are broadly in favour of higher taxes, but only if you get an indication where the money is being spent. As band member Kimberly Walsh observed in a comment that revealed the group to be a bit more politically astute than you'd expect given the majority of their public pronouncements are reserved for the slagging off of Charlotte Church: "You'd happily pay taxes if you thought, I'm paying them so a fireman or a nurse can have a decent wage. Funding the National Health Service (NHS) – Mark G. Hayes. From the perspective of Catholic Social Thought (CST), the National Health Service (NHS) does pretty well. 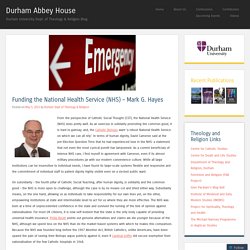 As an exercise in solidarity promoting the common good, it is hard to gainsay; and, the Catholic Bishops want ‘a robust National Health Service on which we can all rely’. In terms of human dignity, David Cameron said at the pre-Election Question Time that he had experienced love in the NHS: a statement that not even the most cynical pundit has lampooned. As a current beneficiary of intense NHS care, I find myself in agreement with Cameron, even if its almost military procedures jar with our modern convenience culture.

While all large institutions can be insensitive to individual needs, I have found its large-scale systems flexible and responsive and the commitment of individual staff to patient dignity highly visible even on a six-bed public ward. Tough times continuing as study sees managers fearing more cuts. Nearly a fifth of parks managers expect to lose up to 50 per cent of their budget over the next five years, according to a recent survey. 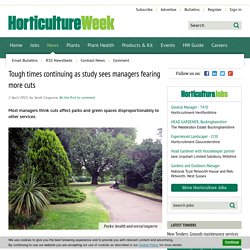 Almost all (99 per cent) of respondents to the study by the Association for Public Service Excellence expect to lose budget over the next five years, with 18 per cent anticipating cuts of between 20 and 50 per cent. The annual Parks & Green Space State of the Market survey found the majority of parks managers (75 per cent) think the cuts are affecting parks and green spaces disproportionately to other service areas. A total of 60 per cent expect to lose jobs through natural wastage, 46 per cent through voluntary redundancy, 46 per cent through a freeze on recruitment and 24 per cent through compulsory redundancies. Only 19 per cent expect no job losses. Making People Count. National Trust to help councils fund parks - LocalGov. 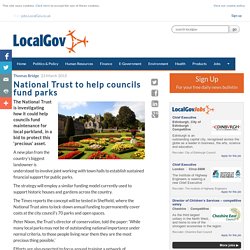 The 11 projects that are Rethinking Parks. Britain's Great Parks Innovators A colleague recently reflected that a great honour of working at Nesta is getting to meet and support Britain’s great social innovators; the people who take a risk in the hope of making our world a little better. 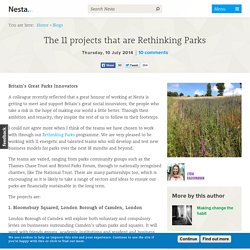 Through their ambition and tenacity, they inspire the rest of us to follow in their footsteps. I could not agree more when I think of the teams we have chosen to work with through our Rethinking Parks programme. We are very pleased to be working with 11 energetic and talented teams who will develop and test new business models for parks over the next 18 months and beyond. Funding. Parks for People community. Six reasons why charities should harness hyperlocal communications.

What’s the first port of call when you’re trying to get publicity for your charity? 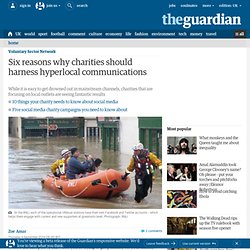 National newspapers? The regional press? A blanket post reaching out to all your Twitter followers? What about when you’re trying to reach local audiences and service users? It can be easy for your message to get drowned out using mainstream channels but increasingly, charities are tapping into the power of hyperlocal social media, with fantastic results. Hyperlocal sites are a valuable tool for charities – they are often the first place people turn when they need help in their communities. Nesta recently invested £2.4m in hyperlocal media. I spoke to some of the charities leading the way in hyperlocal to see why it works for them: 1. Many hyperlocal sites have high levels of engagement which is a gift for charities. 2. 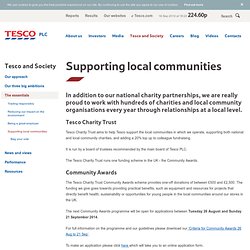