What do angel investors want? Nick Abrahams: very difficult to get things funded. 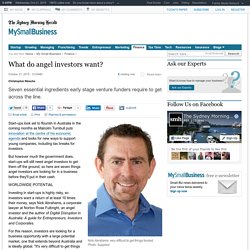 Photo: Supplied Start-ups look set to flourish in Australia in the coming months as Malcolm Turnbull puts innovation at the centre of his economic agenda and looks for new ways to support young companies, including tax breaks for investors. But however much the government does, start-ups will still need angel investors to get them off the ground, so here are seven things angel investors are looking for in a business before they'll put in their cash. Investing in start-ups is highly risky, so investors want a return of at least 10 times their money, says Nick Abrahams, a corporate lawyer at Norton Rose Fulbright, an angel investor and the author of Digital Disruption in Australia: A guide for Entrepreneurs, Investors and Corporates.

For this reason, investors are looking for a business opportunity with a large potential market, one that extends beyond Australia and is ideally global. The Australian Small Scale Offerings Board (ASSOB) Www.startmate.com.au » Financing Docs. Startups raising money in Australia should spend less on legal fees. 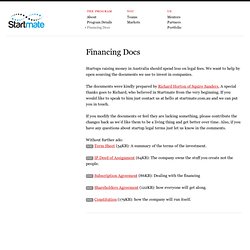 We want to help by open sourcing the documents we use to invest in companies. The documents were kindly prepared by Richard Horton of Squire Sanders. A special thanks goes to Richard, who believed in Startmate from the very beginning. If you would like to speak to him just contact us at hello at startmate.com.au and we can put you in touch. If you modify the documents or feel they are lacking something, please contribute the changes back as we’d like them to be a living thing and get better over time. Without further ado:DOC Term Sheet (54KB): A summary of the terms of the investment. DOC IP Deed of Assignment (64KB): The company owns the stuff you create not the people. DOC Subscription Agreement (86KB): Dealing with the financing. Www.ausindustry.gov.au/programs/venture-capital/esvclp/Documents/ESVCLP-PartnershipList.pdf. 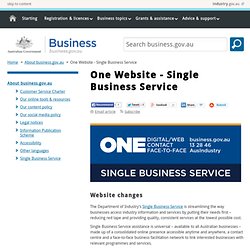 Single Business Service assistance is universal ­– available to all Australian businesses – made up of a consolidated online presence accessible anytime and anywhere, a contact centre and a face-to-face business facilitation network to link interested businesses with relevant programmes and services. As a part of this initiative, from 1 July 2014, the following websites are being merged into a consolidated, single resource for business: Business Source: Why Entrepreneurs and VCs Disagree in Valuing Start-up Firms: Imputing the. Mba.tuck.dartmouth.edu/pecenter/research/pdfs/Note_on_Angel_Investing.pdf. Discover Projects » Staff Picks. Facebook's first investor bets big on Aussie 'corporate refugees' Corporate refugees ... 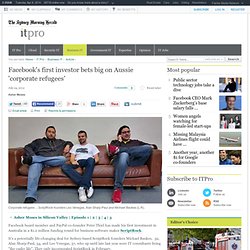 ScriptRock founders Leo Venegas, Alan Sharp-Paul and Michael Baukes (L-R). Asher Moses in Silicon Valley | Episode 1 | 2 | 3 | 4 | 5 Facebook board member and PayPal co-founder Peter Thiel has made his first investment in Australia in a $1.2 million funding round for business software maker ScriptRock. It's a potentially life-changing deal for Sydney-based ScriptRock founders Michael Baukes, 32, Alan Sharp-Paul, 34, and Leo Venegas, 37, who up until late last year were IT consultants living "the cushy life".

They only incorporated ScriptRock in February. Peter Thiel on stage at a conference in San Francisco. "We're corporate refugees mate ... we're just normal guys who couldn't handle the corporate life anymore and wanted to do something great," said Baukes. Advertisement It comes after Fairfax Media first revealed that Thiel, a heavyweight entrepreneur in Silicon Valley and beyond, was hunting for hot start-ups in Australia early this year. Valar Ventures. Ninja Blocks. Ninja Blocks. Ninja. 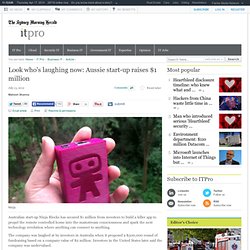 Australian start-up Ninja Blocks has secured $1 million from investors to build a killer app to propel the remote controlled home into the mainstream consciousness and spark the next technology revolution where anything can connect to anything. The company was laughed at by investors in Australia when it proposed a $500,000 round of fundraising based on a company value of $2 million. Investors in the United States later said the company was undervalued. The Ninja Block is a hardware device that detects changes in the physical environment and wirelessly sends the information to the online Ninja Cloud, a set of software applications that allow users to control wireless-enabled devices and appliances, or upload content to social media. Movement, light, sound and pressure sensors can be attached to the Ninja Block to, say, trigger a webcam to take a photo and upload to Facebook.