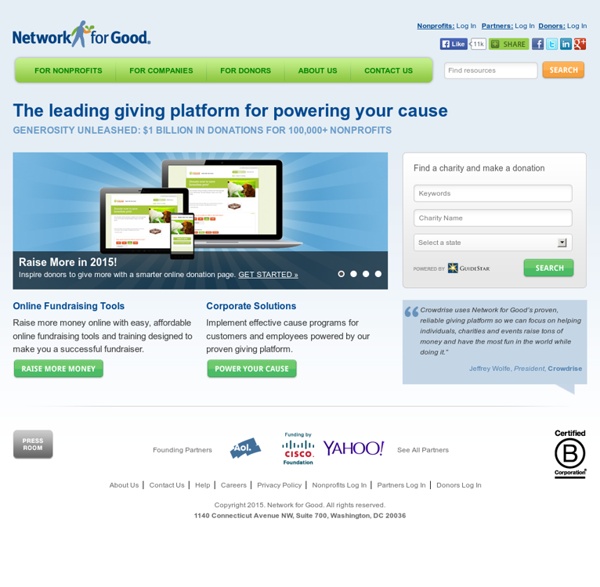 Kubatana.net speaks out from Zimbabwe Change starts with us. Right? Posted on February 11th, 2014 by Bev Clark. Filed in Uncategorized, Zimbabwe Blog. Fundraising on Facebook with Causes Causes is the world’s largest platform for activism and philanthropy. Their team empowers individuals to create grassroots communities called “causes” that take action on behalf of a specific issue or nonprofit organization. Since their founding in 2007, Causes has brought together: Why Use Causes Build communities of supporters Conduct fundraising campaigns Circulate petitions Build volunteer capacity And, more! These tools are free and allow nonprofits not just to build a big list, but to empower everyone in your cause community to take actions, get friends involved and expand your reach as an organization through your supporters’ social networks.

Online Fundraising Website and Software for Events and Causes DonorsChoose How does it work? DonorsChoose.org is an online charity that makes it easy for anyone to help students in need. Public school teachers from every corner of America post classroom project requests on our site, and you can give any amount to the project that most inspires you. When a project reaches its funding goal, we ship the materials to the school. You'll get photos of the project taking place, a letter from the teacher, and insight into how every dollar was spent. Give over $50 and you'll also receive hand-written thank-yous from the students.

Friend-to-Friend Campaigns with Crowdrise Crowdrise is about online fundraising, event fundraising, volunteering and having the most fun in the world while doing it. They’re making an impact by providing a site where even if the cause is extremely serious, people raising money for that cause could have fun doing it. In the short time they have been around, they have found that Making donating fun - through things like badges, game mechanics and point systems - actually works. The Basic Idea Your organization can turn all of your donors, supporters and volunteers into Fundraisers by asking them to create their own free fundraising page on Crowdrise.

Airline Ambassadors Care2 make a difference? The Trump Administration is proposing to cut $5.8 billion from the National Institutes of Health (NIH) in the proposed FY 2018 budget. At a time when extraordinary progress is being made against cancer and many other diseases, these draconian cuts would set research back for decades and also threaten the careers of an entire generation of young investigators working in labs and clinics all over the country who are committed to improving public health and saving lives. Trump's budget proposal will severely jeopardize the progress we are making in preventing, treating, and curing cancer. Providing robust, sustained, and predictable annual funding increases for the NIH is absolutely required for the benefit of cancer patients nationwide. Please sign the petition and stand with us in opposition of President Trump's proposal to cut the NIH budget.

Instagiv mobile donations Fundraising Fundraising or fund raising (also known as "development") is the process of soliciting and gathering voluntary contributions of money or other resources, by requesting donations from individuals, businesses, charitable foundations, or governmental agencies (see also crowd funding). Although fundraising typically refers to efforts to gather money for non-profit organizations, it is sometimes used to refer to the identification and solicitation of investors or other sources of capital for for-profit enterprises. Traditionally, fundraising consisted mostly of asking for donations on the street or at people's doors, and this is experiencing very strong growth[citation needed] in the form of face-to-face fundraising, but new forms of fundraising such as online fundraising have emerged in recent years, though these are often based on older methods such as grassroots fundraising. Organizations[edit]

Global Giving See How It Works - Just Press Play! GlobalGiving connects you to over 1,000 pre-screened grassroots charity projects around the world. It's an efficient, transparent way to make an impact with your giving. Connecting Donors to Doers