Paul Graham- How to fud a start-up? 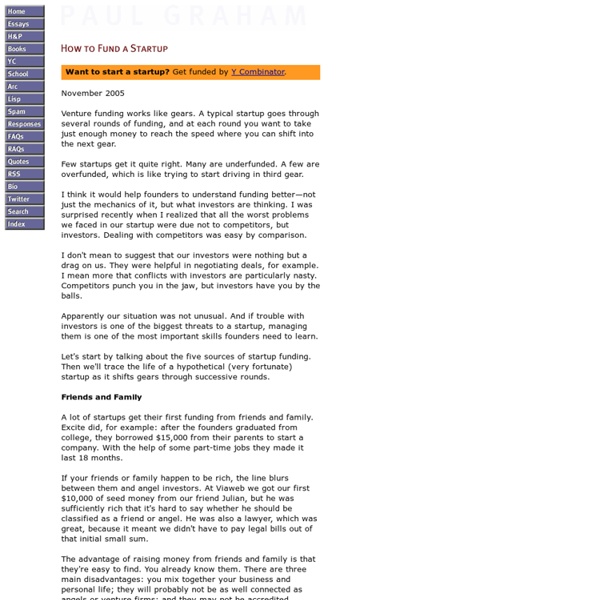 November 2005 Venture funding works like gears. A typical startup goes through several rounds of funding, and at each round you want to take just enough money to reach the speed where you can shift into the next gear. Few startups get it quite right. Many are underfunded. I think it would help founders to understand funding better—not just the mechanics of it, but what investors are thinking. I don't mean to suggest that our investors were nothing but a drag on us. Apparently our situation was not unusual. Let's start by talking about the five sources of startup funding. Friends and Family A lot of startups get their first funding from friends and family. If your friends or family happen to be rich, the line blurs between them and angel investors. The advantage of raising money from friends and family is that they're easy to find. The SEC defines an "accredited investor" as someone with over a million dollars in liquid assets or an income of over $200,000 a year. Consulting Angel Investors

How Funding Works - Splitting The Equity With Investors - Infographic A hypothetical startup will get about $15,000 from family and friends, about $200,000 from an angel investor three months later, and about $2 Million from a VC another six months later. If all goes well. See how funding works in this infographic: First, let’s figure out why we are talking about funding as something you need to do. This is not a given. If you know the basics of how funding works, skim to the end. Every time you get funding, you give up a piece of your company. Splitting the Pie The basic idea behind equity is the splitting of a pie. When Google went public, Larry and Sergey had about 15% of the pie, each. Funding Stages Let’s look at how a hypothetical startup would get funding. Idea stage At first it is just you. Co-Founder Stage As you start to transform your idea into a physical prototype you realize that it is taking you longer (it almost always does.) Soon you realize that the two of you have been eating Ramen noodles three times a day. Registering the Company

unnamed There’s this dance that entrepreneurs and venture capitalists do when it comes time to negotiate the economic terms of an investment. And it all revolves around valuation. The question is what is the fair value of the business? But I think the concept of valuation is often misunderstood by the people engaged in this process. I do not believe that negotiating a valuation on an early stage venture investment has much to do with the current value of the business. The fact is that almost all venture capital deals are done as convertible preferred stock investments. It’s only in the event that the deal works out that the percentage of the business (the thing that valuation is supposed to determine) matters in terms of how much money we make. Another important factor to consider is that only a relatively small portion of early stage venture investments really work out in the way they were supposed to when the investment was made. The 1/3 rule goes as follows: 1/3 of the deals turn out badly.

Angel Resource Institute Topics: Angel Research, Angel Groups, Angel Market Data, Valuation Summary: The 2012 Halo Report is a collaborative project of Angel Resource Institute, Silicon Valley Bank, and CB Insights. The Halo Report provides on-going trends of angel group activities in US companies. ARI (n.d.). 2012haloreportinfographic [Article]. Retrieved from ARI. “2012HaloReportInfographic” ARI. n.d.. Venture Capital Deal Algebra Fred Wilson wrote a useful post on valuation today. It reminded me of a document I had Dave Jilk write when he was doing some work for me. I decided to write this “bladon” (Blog Add-on) post – inspired by Fred. I’ve found that even sophisticated entrepreneurs didn’t necessary grasp how valuation math (or “deal algebra”) worked. In a venture capital investment, the terminology and mathematics can seem confusing at first, particularly given that the investors are able to calculate the relevant numbers in their heads. The essence of a venture capital transaction is that the investor puts cash in the company in return for newly-issued shares in the company. The value of the whole company before the transaction, called the “pre-money valuation” (and similar to a market capitalization) is just the share price times the number of shares outstanding before the transaction: Pre-money Valuation = Share Price * Pre-money Shares Investment = Share Price * Shares Issued $2m / ($3m + $2m) = 2/5 = 40%

The million dollar list: New Crowd-sourced list provides details of Israeli Angels Photo Credit: Eden Shochat's Angel list A new list now available online includes the names of more than 100 Israeli investors, and their areas of investment interest The biggest obstacle facing an entrepreneur who’s looking to raise money is getting to the right investor. First they have to find an investor interested in investing in the areas of their project, and second, they have to know how to reach them. A valuable list with a social twist Shochat created a list, the first of its kind to be released publicly, containing the names of about 130 Israeli angels. Lastly, he also includes a list of information about investor deals including later stages of startups. The novelty of the list and it’s public nature is rooted in its social aspect as being an open document in a Google Spreadsheet. Shochat explains that if an Angel is not on the list and would like to add his name, or alternatively, if an Angel is unhappy with their listing, it’s not a problem. Where are the links?

Term Sheet: Price - Mozilla Firefox A the end of the year, I completed a financing that was much more difficult than it needed to be. As Jason Mendelson (our general counsel) and I were whining to each other we decided to do something about it. At the risk of giving away more super-top-secret VC magic tricks, we’ve decided to co-author a series of posts on Term Sheets. We have chosen to address the most frequently discussed terms in a venture financing term sheet. The early posts in the series will be about terms that matter – as we go on, we’ll get into the more arcane and/or irrelevant stuff (which – ironically – some VCs dig in and hold on to as though the health of their children depended on them getting the terms “just right.”) The specific contract language that we refer to (usually in italics) will be from actual term sheets that are common in the industry. In general, there are only two things that venture funds really care about when doing investments: economics and control. Alternatively:

Venture Capital Firms | Assets, Investment Size, Location How Many Shares Should a Startup Company Authorize at Incorporat An often overlooked aspect of filing a certificate of formation or articles of incorporation is determining how many shares the new corporation should authorize. This decision doesn’t really matter to most businesses (I don’t have a clue how many shares I authorized when I incorporated my law firm), but startup companies aren’t like most businesses. Most businesses don’t grant stock options or seek venture capital. The number of shares to issue at incorporation is somewhat arbitrary, but my preference is to authorize 10,000,000 shares. Now, that doesn’t mean all 10,000,000 shares will be issued to the founders. For example, say you authorize 10,000,000 shares. Of course, you could obtain the same result by authorizing 1,000,000 shares with an option pool of 100,000 and a 900,000 issuance to the founders. Update: If you are looking for information about startup company incorporation, check out my “If I Launched a Startup” article.

The Gust Blog - Thoughts on startups by investors who fund them & entrepreneurs who run them. The two sites you mentioned are both secondary listing services, for later stage companies. For a new angel investor, by far the best thing to do is to join a local angel investor group that belongs to the Angel Capital Association. There are hundreds of them, with at least one in every state. Some groups specialize, investing primarily in life sciences or tech companies or women-led ventures or other areas. But regardless of the specifics, what they all have in common is bringing together a group of active Accredited Investors interested in supporting young startups. The typical US angel group will receive a dozen or more funding applications from startups each month; the most active ones, such as New York Angels will receive over 100. As a very rough idea of what these groups are like, the typical member invests in one or two companies each year, putting in $25,000 to $100,000 in each one. *original post can be found on Quora @ *

this is the BEST and most complete article I have found so far... by maudpasturaud Mar 16