Online Fundraising Website and Software for Events and Causes 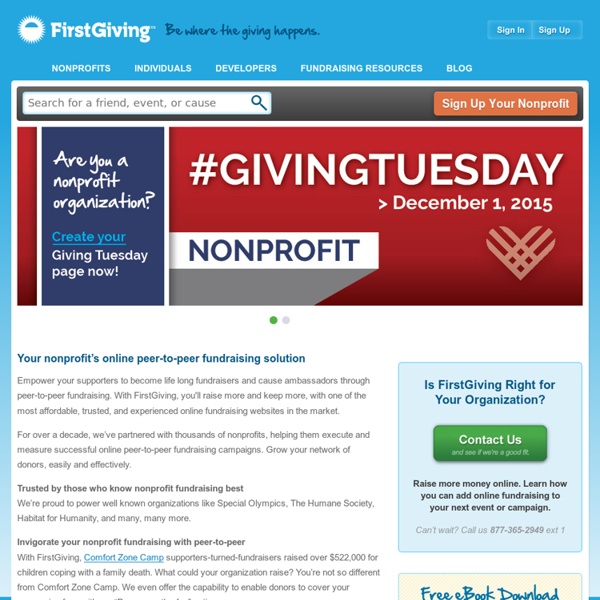 FirstGiving is dedicated to one purpose: empowering passionate nonprofit supporters to raise more money than they ever thought possible for the causes they care about. We partner with nonprofit organizations to allow them to plan, execute, and measure successful online fundraising campaigns and charity fundraising events with our fundraising software. For individual fundraisers, we aim to make it easy, effective, and even fun to raise money online! For donors, we take the friction out of making a secure online donation. Our simple, yet powerful tools, along with the fundraising tips and fundraising ideas on FirstGiving, allow nonprofits and their supporters to meet and exceed their goals of raising money for important causes, building awareness, and expanding the world of giving. Featured Causes

Peerbackers Strength in Numbers peerbackers is a new way to fund entrepreneurs. It is an online funding platform that allows business owners to raise capital from their “peers”—in small increments—in exchange for tangible rewards to those who contribute. We’re the connectors— our online marketplace directly links business people who are looking for a small amount of start-up or growth capital with individuals who are willing to contribute that funding in small increments. These individuals can be friends, family or complete strangers…but they all share one thing—at least $10 to spare and a desire to have a positive impact on the world. Not to mention—the contributors get cool rewards too!

Online Fundraising for Nonprofits - A Startup Guide 10. Segment Your Donors As your expertise and experience with online fundraising advances, think about segmenting your audience. How Memoto raised $500,000 on Kickstarter, part 1. Still being in something of a shock over the overwhelming response Memoto’s Kickstarter project has had, we feel we need, for reasons of self-therapy if nothing else, to put down in words what has really happened these past few weeks since we launched. We will do this in two parts, one where we describe the process leading up to the launch of the project and one where we disclose some lessons learned during the actual project. So, what’s Kickstarter? Well basically, it’s a website for crowdfunding projects. Anyone can set up a project and seek funding – and anyone can fund a project.

Top 12 Online Fundraising Platforms for Donors & Non-Profits Thanks to the social web, each of us has the unprecedented ability to offer not only monetary support but also the reach of our own online networks in support of a cause. Non-profits can also tap into a myriad of sites enhanced by social media to turbo-charge fundraising campaigns and galvanize supporters. Here are some of the best funding sites that leverage social networks and online crowds to help you do some (social) good. If there are others that you find worthwhile, please share them in the comments. 1. Causes

Hacking Kickstarter: How to Raise $100,000 in 10 Days (Includes Successful Templates, E-mails, etc.) Mike Del Ponte co-founded Soma, which raised more than $100,000 on Kickstarter using virtual assistants and free apps. I first met Mike Del Ponte two years ago when he was running marketing at BranchOut, a startup I advise. Before joining BranchOut, Mike had explored a variety of career paths, including preparing for the priesthood at Yale Divinity School and serving as a peacemaker in the West Bank. Earlier this year, Mike came to me with a new product idea called Soma. Soma is, in its simplest form, a high-end competitor to Brita water filters. Charity fundraising - pick sites to max donations When running the marathon in a gorilla suit, or climbing the three peaks for charity, many people pick the best-known sites JustGiving or Virgin Money Giving to host their page. But it's worth doing your homework, as they're not the best payers. The amount your charity gets can vary vastly depending on which website you pick - this site-by-site guide helps you decide where to set your fundraising page up. What happens when you make a donation?

Manage Your Kickstarter Campaign With This Simple Dashboard Earlier this month, Soma launched a Kickstarter campaign to raise $100,000 for a new water filter to rival those offered by Brita and other companies. The campaign raised $50,000 in just 36 hours, but that proved to be a mixed blessing for the team running it. "We were being inundated with everything from tweets to Facebook posts to messages on Kickstarter," said Mike Del Ponte, a co-founder of Soma. "It was crazy. We thought we did a really good job of preparing — we had a dedicated customer service person and a dedicated social media person — and it was still just nuts." Why Online Fundraising is the Future [INFOGRAPHIC] If you’re familiar with the 2013 Nonprofit eBenchmarks Study, you know that online fundraising isn’t just for the future: it’s important for your nonprofit right now. Fundraising online isn’t a channel that exists in isolation from direct mail, word of mouth and event-based fundraising: it makes each of them stronger! The web makes connecting easier–before and after events, in addition to receiving a newsletter and as a way to retain those who are already donors. Read the free infographic below to learn more about the power of online fundraising: Thanks for reading!