TeachCS. Here's How You Can Win a $10K Grant for Your Makerspace Even If You're an English Teacher. Sending computers to schools isn’t the only way to skin the proverbial cat of getting students to code.

Growing interest in project-based learning and the burgeoning Maker Movement have seen makerspaces playing a bigger role in schools as an opportunity to introduce students to a variety of creative disciplines—including computer science. With the goal of creating interest in computational thinking as well as coding, the Infosys Foundation USA has introduced the Infy Makers Awards to encourage creation of makerspaces in schools, focusing especially on students and schools lacking resources and STEM proficiency. Kaustav Mitra, VP of Innovation Ecosystems at the foundation, adds a bit more color. “Making, especially technology making as seen at the Maker Faire, is a great gateway drug for getting kids excited about engineering, especially coding,” Mitra tells EdSurge. Fifty awards, worth $10,000 each, will be given to educators to create makerspaces. “We’re operating on a ‘pull’ mechanism. Meet the Web site where start-up dreams go to die.

“This is the Rocky story for our generation,” reads a tagline for a would-be film about a would-be superhero. 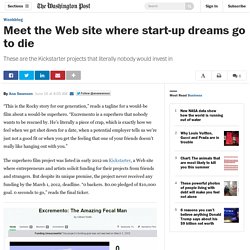 “Excremento is a superhero that nobody wants to be rescued by. He's literally a piece of crap, which is exactly how we feel when we get shot down for a date, when a potential employer tells us we're just not a good fit or when you get the feeling that one of your friends doesn't really like hanging out with you.” The superhero film project was listed in early 2012 on Kickstarter, a Web site where entrepreneurs and artists solicit funding for their projects from friends and strangers.

But despite its unique premise, the project never received any funding by the March 1, 2012, deadline. “0 backers. $0.00 pledged of $10,000 goal. 0 seconds to go,” reads the final ticker. Kickended. How to Crowdfund Your Classroom. If you’re like most teachers, you spend a crazy amount of your own money on your classroom. 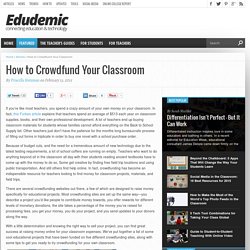 In fact, this Forbes article explains that teachers spend an average of $513 each year on classroom supplies, books, and their own professional development. A lot of teachers end up buying classroom materials for students whose families cannot afford everything on the Back to School Supply list. Other teachers just don’t have the patience for the months long bureaucratic process of filling out forms in triplicate in order to buy one novel with a school purchase order. Because of budget cuts, and the need for a tremendous amount of new technology due to the latest testing requirements, a lot of school coffers are running on empty. Teachers who want to do anything beyond sit in the classroom all day with their students reading ancient textbooks have to come up with the money to do so. Image courtesy of Pixaby by Erge 5 Educational Projects Paid For By Crowdfunding. 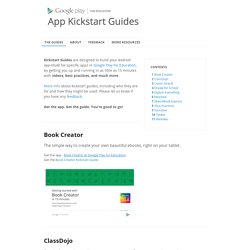 More info about kickstart guides, including who they are for and how they might be used. Please let us know if you have any feedback. Get the app. Get the guide. You're good to go! Book Creator The simple way to create your own beautiful ebooks, right on your tablet. ClassDojo Simple, free, and easy classroom management! Comic Strip It! Comic Strip It! The ‘Best’ Way to Crowdfund America’s Classrooms. In 2000, Charles Best, a seventh grade history teacher in the Bronx, was struggling to make Narrative of the Life of Frederick Douglass feel relevant for his students. 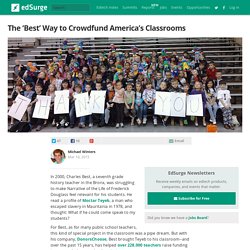 He read a profile of Moctar Teyeb, a man who escaped slavery in Mauritania in 1978, and thought: What if he could come speak to my students? For Best, as for many public school teachers, this kind of special project in the classroom was a pipe dream. But with his company, DonorsChoose, Best brought Teyeb to his classroom--and over the past 15 years, has helped over 228,000 teachers raise funding to pursue their own school projects.

On March 9, Best, dressed in the startup uniform of jeans, blazer and t-shirt, kicked off SXSWedu with the story of how DonorsChoose came to be--and the role he believes crowd-funding can play in the classroom. Best also described some of his first fervent investors (of their time, at least): his students. 1. 2. 3.