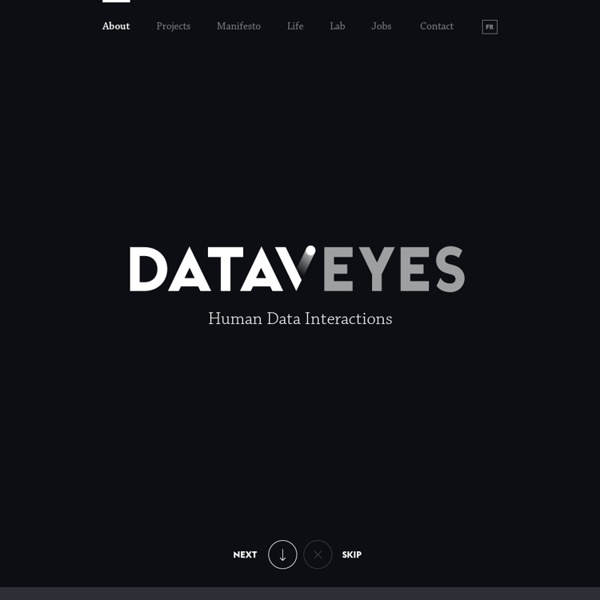 28 Tools to Help You Launch Your Startup — Product Hunt Lean Development Bubble Build a fully functional web app without any code. The goal of Bubble is to make programming easy for those who don’t have experience with its visual programming tool that allows you to build web and mobile applications without any code. Wind Map An invisible, ancient source of energy surrounds us—energy that powered the first explorations of the world, and that may be a key to the future. This map shows you the delicate tracery of wind flowing over the US. The wind map is a personal art project, not associated with any company. We've done our best to make this as accurate as possible, but can't make any guarantees about the correctness of the data or our software. Please do not use the map or its data to fly a plane, sail a boat, or fight wildfires :-) If the map is missing or seems slow, we recommend the latest Chrome browser.

Data visualized: The world’s refugees over four decades To spend just a few minutes experiencing the newly created online data visualization The Refugee Project is to start to comprehend just how enormous, complex, and problematic the ebb and flow of the world’s millions of refugees has been over the past almost half century. That’s the unique power of data visualization, which is an emerging way for designers, developers, media companies and organizations to tell complex and data-rich stories visually. Developed by design firm Hyperakt and designer Ekene Ijeoma, The Refugee Project takes close to forty years worth of refugee data from The Office of the United Nations High Commissioner for Refugees, as well as world population data from the U.N, and overlays it on an interactive map. The team also mixed in narratives from about 80 individual refugee conflicts (from Rwanda to Afghanistan), and set the whole thing on a yearly timeline. A screenshot of The Refugee Project Data storytelling

This site publishes high-touch, time-intensive data visualizations (and has a business that sustains it) Over 7,000 artists played in the New York City area in 2013. Only 21 of those later made it, really made it, headlining at a venue with an over 3,000-person capacity — among them, bigger names like Chance the Rapper, X Ambassadors, Sam Smith, and Sylvan Esso. I learned this sort of random but fascinating tidbit from a data visualization titled “The Unlikely Odds of Making it Big,” from the site The Pudding. The Pudding is the home to high-touch, painstakingly crafted data visualizations — what the site calls “visual essays” — that are distinct in their obsessive complexity over points of cultural curiosity. Most pieces stand wholly apart from the U.S. news cycle; no anxiety-inducing interactives around budget, taxes, health care. Want to see everywhere jazz legend Miles Davis is mentioned across Wikipedia, and how he’s connected to other people, recordings, and places?

The Four Horsewomen of WWE So she modeled the role after her mother. Not that her mother was some crazy scam artist. “She’s a great, perfect mother,” says Becky. “But you know those mothers. When an Irish mommy has a temper!” It’s a particularly fond memory for Becky, primarily because just two years earlier, she found herself cast in a college production of Animal Farm. Gallery · mbostock/d3 Wiki Wiki ▸ Gallery Welcome to the D3 gallery! More examples are available for forking on Observable; see D3’s profile and the visualization collection. JavaScript and ActionScript Data Visualization Libaries & Toolkits - Alan Greenblatt Andy Trice recently forwarded me this link: a great site which showcases the current state of many visualization toolkits & frameworks. Upon investigation though, it looks like this is a mix of JavaScript & ActionScript libraries, applications for creation of data visualizations and generic helper tools. Navigating through the list seemed a tricky for the average developer. As well, there was a bunch of libraries I knew about that I didn’t see listed. It seemed to me like it would be useful to recreate this list based not on whether I’m trying to create a map or chart for example, but rather based on development restrictions. If you’re building an HTML/JS application, ActionScript libraries are not very helpful.

Graphic Shows Who’s Buying and Selling Animals Globally Kaitlin Yarnall is the Executive Editor for Cartography, Art, and Graphics at National Geographic magazine. Tiger claws are sold to treat insomnia, and the skin of tiger noses is bought to heal wounds. Along with “tiger wine” made from ground-up bones, these are just a few of the ways that nearly 1,700 tigers were bought and sold around the world in 2013. This new graphic from National Geographic and Fathom Information Design—the first in a new series we’re calling Data Points—reveals many surprises in the animal trade. The United States is the biggest exporter of rhesus macaques, for instance, one of the main species used in medical research (and at times as NASA test-flight subjects). And reptiles are the most-traded animals in the world.

Data visualisation: how Alberto Cairo creates a functional art It's not enough for visualisations to string the correct numbers together, they should - in the words of William Morris - be beautiful and useful. And one of the leading experts in making data beautiful is Alberto Cairo - who teaches information graphics and visualisation at the University of Miami's School of Communication. His latest book, The Functional Art, is a comprehensive guide not only to how to do it; but how to get it right, too.