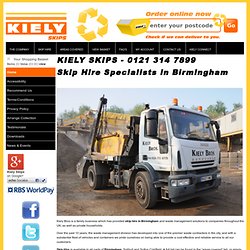 Over the past 10 years, the waste management division has developed into one of the premier waste contractors in the city, and with a substantial fleet of vehicles and containers we pride ourselves on being able to provide a cost effective and reliable service to all our customers. Skip Hire is available to all parts of Birmingham, Solihull and Sutton Coldfield. A full list can be found in the “areas covered” tab, or simply enter your postcode to see if your location is covered. Our Skip hire and containers include Mini Skips, Midi Skips, Builders Skips, 14yd Skips and also Enclosed Skips.

If you are unsure of which skip you require please phone us and our experienced sales team will advise you on skip hire & provide you with all the information you require to make the right decision. Police Auctions West Midlands. Live traffic & travel news for Birmingham - Worcester News. Birmingham Weather 10 Day Forecast. Flood warnings. Library of Birmingham: Europe's largest public library is set to open in a matter of days. Library of Birmingham is due to officially open on September 3 after taking more than three years to buildConstruction work started on the building in January 2010 and it has cost a total of £189millionIt has been designed by architect Francine Houben; the exterior's interlacing rings reflect city's canals and tunnels By James Rush Published: 00:37 GMT, 29 August 2013 | Updated: 08:52 GMT, 29 August 2013 It has taken more than three years and cost £189million to build, but Europe's biggest library is due to open in a matter of days in Birmingham. 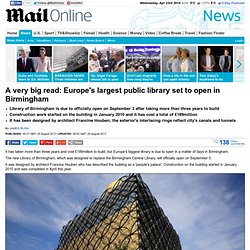 The new Library of Birmingham, which was designed to replace the Birmingham Central Library, will officially open on September 3. It was designed by architect Francine Houben who has described the building as a 'people's palace'. Impressive: The new Library of Birmingham, which has taken more than three years to build and cost £198m, is set to open on September 3 Green: The library will also feature an outdoor roof terrace garden. Beautiful photos of Birmingham. Verity Milligan has set out to dispel Birmingham's image as one of the UK's ugliest citiesHer pictures capture the West Midlands metropolis from unusual angles to bring out its hidden beautyThe extensive canals, parks, squares and even the much-mocked Selfridges building are given a makeover By Sam Webb Published: 09:26 GMT, 26 March 2014 | Updated: 13:17 GMT, 26 March 2014 Birmingham frequently gets a bad reputation for its appearance, often being voted the ugliest city in the UK. 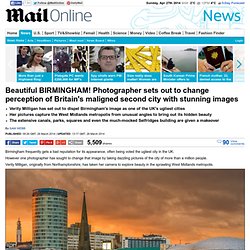 However one photographer has sought to change that image by taking dazzling pictures of the city of more than a million people. Verity Milligan, originally from Northamptonshire, has taken her camera to explore beauty in the sprawling West Midlands metropolis. Landmarks: A photographer has taken beautiful pictures with an unlikely source - Birmingham. Bathed in the light: The new Birmingham Central Library in Centenary Square during sunset. Fox Hollies Park in south Birmingham during sunset. Spaghetti Junction turns 40: The hidden beauty of Britain's craziest motorway flyover. By Kerry Mcqueeney Created: 08:28 GMT, 24 May 2012 Its unsightly appearance is matched only by the level of confusion is causes the motorists who use it. 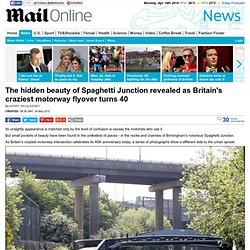 But small pockets of beauty have been found in the unlikeliest of places - in the nooks and crannies of Birmingham's notorious Spaghetti Junction. As Britain's craziest motorway intersection celebrates its 40th anniversary today, a series of photographs show a different side to the urban sprawl. Tranquil pursuits: Fishermen enjoy a moment of peace on the banks of the junction's calm waterways as traffic thunders on the flyover above Loved and loathed: The junction's sprawling concrete arteries are more concrete jumble then concrete jungle... but there is tranquility to be found Men are seen peacefully enjoying a spot of fishing in the relatively tranquil waterways as traffic thunders over the flyover above. Engineers carrying out repairs on Spaghetti Junction believe motorway intersection will last for another 100 years.