Exeter Chiropractors - Float Therapy, Autism and Sky TV. News from Ocean Float Rooms Centers. County Chiropractic Clinic www.exeter.countychiropractic.co.uk is a bright and cheery establishment with a positive vibe that has been purposefully created. 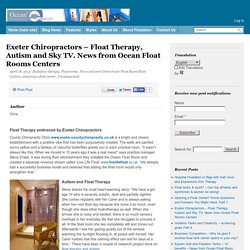 The walls are painted sunny yellow and a tableau of colourful butterflies greets you in each practice room. “It wasn’t always like this. When we moved in 10 years ago it was a real mess!” Says practice manager, Steve Drake. It was during their refurbishment they installed the Ocean Float Room and created a separate revenue stream called ‘Live Life Float’ www.livelifefloat.co.uk. Floatation integrated into the client Care Plan Each client is given a Care Plan, which becomes their journey to health. Calm Water Floatation Nottingham rear of 1a Mabel grove NG2 5GT 0115 9825259. NHS Discount:£10 discount on the standard £45 single session price. 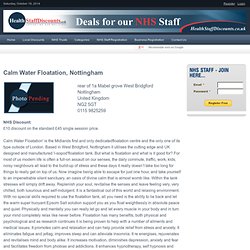 Calm Water Floatation' is the Midlands first and only dedicatedfloatation centre and the only one of its type outside of London. Based in West Bridgford, Nottingham it utilises the cutting edge and UK designed and manufactured 'i-sopod'floatation tank. But what is floatation and what is it good for? For most of us modern life is often a full-on assault on our senses, the daily commute, traffic, work, kids, noisy neighbours all lead to the build-up of stress and these days it really doesn’t take too long for things to really get on top of us.

Now imagine being able to escape for just one hour, and take yourself to an impenetrable silent sanctuary, an oasis of divine calm that is almost womb like. Lazy Frog Float Centre, Uplands, Swansea.... relaxation through floatation - Welcome. Therapies — Float Beyond. Hi, I'm Diane. 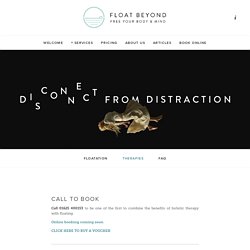 I got started in holistic therapies over 10 years ago when I qualified. I wanted to make people feel wonderful, relaxed, purified, balanced, revived and more... Things were not quite that simple!!! My path was not straight forward though. After gaining my qualifications I went into beauty retail. I was initially excited about getting promotions and earning more money. Where my journey really started!! Floatation therapy research. THERE’S NO DOUBT THAT floating works ─ as a therapeutic, educational and entertainment tool it has powerful effects on a number of levels, including the physical, emotional, intellectual and spiritual. 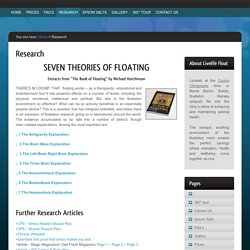 But why is the floatation environment so effective? What can be so actively beneficial in an essentially passive device? This is a question that has intrigued scientists, and today there is an explosion of floatation research going on in laboratories around the world. The evidence accumulated so far falls into a number of distinct, though inter─related explanations. Among the most important are: The buoyancy afforded by the dense Epson-salt solution eliminates the body’s specific gravity, bringing the floater close to an experience of total weightlessness. One way of learning to produce theta waves is to perfect the art of meditation. The two hemispheres or the neo-cortex operate in fundamentally different modes.

One other neurochemical theory is the “return of the womb” explanation. Floatation Therapy, Floatation Tanks, Exeter, Devon - Livelife Float. Floatopia Floatation Centre in London. Calm Water Floatation - Retreat in Nottingham, West Bridgford - Experience Nottinghamshire. For most of us modern life is often a full-on assault on our senses, the daily commute, traffic, work, kids, noisy neighbours all lead to the build-up of stress and these days it really doesn’t take too long for things to really get on top of us. 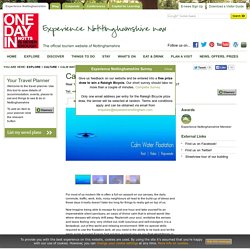 Now imagine being able to escape for just one hour and take yourself to an impenetrable silent sanctuary, an oasis of divine calm that is almost womb like where stresses will simply drift away. Floatation tanks and flotation therapy at The London Floatation Tank Centre. Beauty Treatments - Mind, Body and Soul Therapy Centre #2. Nirvana Spa. Flotation at The Cornmill Complementary Health Centre East Grinstead West Sussex. What is Floating ? 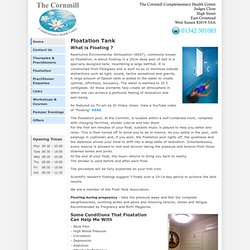 Restrictive Environmental Stimulation (REST), commonly known as Floatation, is about floating in a 25cm deep pool of salt in a specially designed tank, resembling a large bathtub. It is constructed from fibreglass and is built so as to minimise outside distractions such as light, sound, tactile sensations and gravity. A large amount of Epsom salts is added to the water to create optimal, effortless, buoyancy. 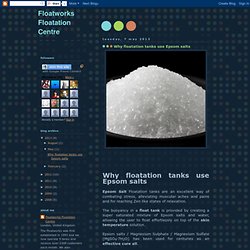 The buoyancy in a float tank is provided by creating a super saturated mixture of Epsom salts and water, allowing the user to float effortlessly on top of the skin temperature solution. Epsom salts / Magnesium Sulphate / Magnesium Sulfate (MgSO4·7H2O) has been used for centuries as an effective cure all. Soaking in Epsom salts has been found to stimulate lymph drainage, and promote the absorption of Magnesium and Sulphates. Magnesium is the second-most abundant element in human cells and the fourth-most important positively charged ion in the body, so it is little wonder this low-profile mineral is so vital to good health and well being. Magnesium levels have dropped by half in the last century due to changes in agriculture and diet.

Floatation Research - calm-water. Whether you are a professional or semi-professional sportsman, sports coach, therapist, health practitioner or simply one of the millions of us stressed by the pace of modern life, we can point you in the direction of some very informative research carried out by some of the world’s leading medical universities and sporting organisations including Goteborg university in Sweden and Pennsylvania State University in the USA. 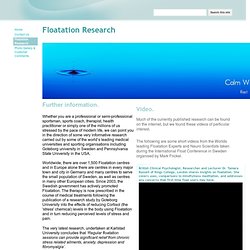 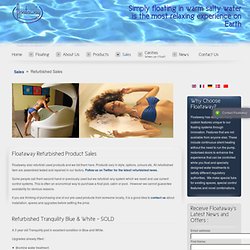 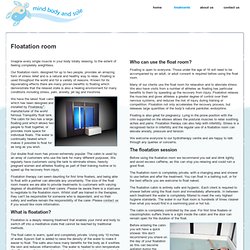 Our floatation room, designed for up to two people, provides an amazing form of stress relief and is a natural and healthy way to relax. Floating is used throughout the world and for a variety of reasons. Known for its rejuvenating effects there are many proven benefits to floating which demonstrate that the relaxed state is also a healing environment for many conditions including stress, pain, anxiety, jet lag and insomnia.

We have the latest float cabin which has been designed and installed by Floataway», manufacturer of the world famous Tranquility float tank. The cabin for two has a large floating pool which allows two people to float together, or provides more space for individual floats. Our double float room has proven extremely popular. Holiday Inn Manchester Airport – Best Deals & Real Reviews. The Holiday Inn Manchester Airport enjoys a Cheshire countryside location with walks in the leafy Bollin Valley, yet it is just one and a half miles from Manchester Airport.

It offers free parking for guests and is conveniently located for visiting Manchester United Football Stadium and the modern Trafford Centre. The MEN Arena and the G-Mex Conference Centre are within easy reach along with Manchester Art Gallery and the Imperial War Museum. Location Manchester city centre is just 15 minutes away from the Holiday Inn. Enjoy the Cathedral, Gothic Town Hall and superb shopping in the Arndale Centre.

The Opera House and Royal Exchange Theatre promise excellent cultural entertainment. RoomsThe well-appointed rooms at Manchester Airport's Holiday Inn offer comfortable modern decor in air conditioned rooms which have a desk, WiFi Internet access and tea and coffee making facilities. About — Beyond Floatation Spa. Here, I made this. It might not work, it's frightening and scary but I believe in it... After 8 years working in the corporate world I've decided to do something different, something very different. It all started as a Christmas present in form of a voucher for a floatation session. I became interested in isolation tanks listening to Joe Rogan's podcast.

After travelling around Latin America in 2012 my world view was challenged and I knew I could not go back to my former life as an accountant. Another floatation session later I decided to 'scratch my own itch' and bring floatation to Manchester and Cheshire in summer 2013. Floatation sits at the intersection of two of my biggest interests; technology and consciousness.

A way to integrate our day to day lives with a greater beauty, presence and meaning. We have One i-sopod tank. Where to Float: Floatation Tank Locations & Isolation Chamber Therapy. UK Floatation Tank Centres - Back in Action. Floatation at Bristol Float Centre What is Floatation? Good question! It’s not the easiest one to explain because it’s different things to different people. In essence though it’s a form of sensory deprivation. Floatation attempts to take away as many of the bodies stimuli as possible to trigger you into a very deep state of relaxation. This is done by allowing you to float in a room with no light, no sound and where water and air are the same temperature as you. Here at Back in Action we believe that flotation is an excellent way to achieve deep relaxation, promoting stress relief and recovery from a variety of injuries. Why Epsom salt rather than sea salt? Is there anything else in the water?