Police held bomber's fingerprints. Police have only just discovered that they held the fingerprints of the ringleader of the July 7 bombings on file before the attacks, it has been revealed. 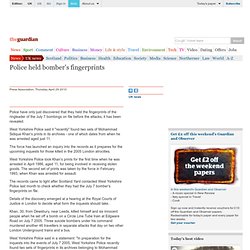 West Yorkshire Police said it "recently" found two sets of Mohammad Sidique Khan's prints in its archives - one of which dates from when he was arrested aged just 11. ICO updates CCTV and surveillance camera guidance. The ICO's updated guidance reflects the technological developments in surveillance, particularly in relation to new technologies like body worn video and drones. 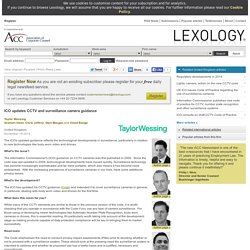 What's the issue? The Information Commissioner's (ICO) guidance on CCTV cameras was first published in 2000. Since the code was last updated in 2008, technological developments have moved quickly. Surveillance technology has become increasingly sophisticated and far more portable, which also means it has become more widespread. 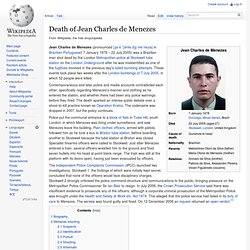 These events took place two weeks after the London bombings of 7 July 2005, in which 52 people were killed. Contemporaneous and later police and media accounts contradicted each other, specifically regarding Menezes's manner and clothing as he entered the station, and whether there had been any police warnings before they fired.

The death sparked an intense public debate over a shoot-to-kill practice known as Operation Kratos. Chilling CCTV footage captures the moment July 7 attacker sets o. By DAVID WILLIAMS Last updated at 08:14 02 May 2008 The devastating moments when two of the July 7 suicide bombers detonated their devices were shown for the first time yesterday. 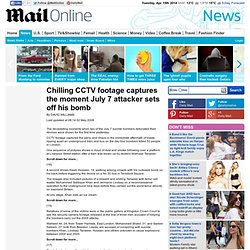 CCTV footage captured the panic and chaos in the immediate aftermath of blasts ripping apart an underground train and bus on the day four bombers killed 52 people in London. One sequence of pictures shows a cloud of dust and smoke billowing over a platform at Liverpool Street station after a train was blown up by student Shehzad Tanweer. Scroll down for more... A second shows Hasib Hussain, 19, walking among crowds with his rucksack bomb on his back before triggering the device on a No 30 bus in Tavistock Square. The images also included pictures of a relaxed and smiling Tanweer with terror cell leader Mohammed Siddique Khan and Jermaine Lindsay on a reconnaissance operation to the underground nine days before they carried out the worst terror atrocity on mainland Britain.

At one stage, Khan eats an ice cream. 2005. UK's secret surveillance regime 'does not breach human rights' High performance access to file storage The Court said that the interference in question pursued the legitimate aims of protecting national security and the economic well-being of the country and preventing crime. 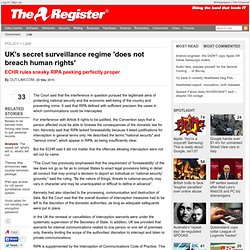 It said that RIPA defined with sufficient precision the cases in which communications could be intercepted. For interference with Article 8 rights to be justified, the Convention says that a person affected must be able to foresee the consequences of the domestic law for him. Kennedy said that RIPA lacked foreseeability because it listed justifications for interception in general terms only. He described the terms "national security" and "serious crime", which appear in RIPA, as being insufficiently clear. But the ECHR said it did not matter that the offences allowing interception were not set out by name. Kennedy had also objected to the processing, communication and destruction of data.

The Editors: Who's watching you? (2) University of Leicester - New Report Reveals Impact of CCTV on C. 'Shoot-to-kill' policy to remain. Police leaders say they will not abandon their "shoot-to-kill" policy and warn more innocent people could be killed in the fight against terrorism. 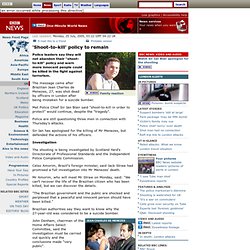 The message came after Brazilian Jean Charles de Menezes, 27, was shot dead by officers in London after being mistaken for a suicide bomber. Met Police Chief Sir Ian Blair said "shoot-to-kill in order to protect" would continue, despite the "tragedy". Police are still questioning three men in connection with Thursday's attacks. UK coalition to halt computer surveillance. U.K. Govt. Employee Arrested for Downloading Surveillance Footage of Couple Having Sex.

An operator responsible for monitoring surveillance footage for the town of Shrewsbury in the U.K. has been arrested after authorities discovered that he downloaded footage of a young couple caught by the cameras having sex in the town center. 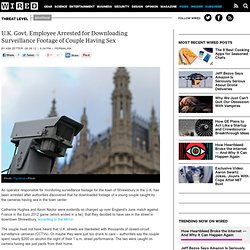 Catherine Hughes and Kevin Naylor were evidently so charged up over England’s June match against France in the Euro 2012 game (which ended in a tie), that they decided to have sex in the street in downtown Shrewsbury, according to the Mirror. The couple must not have heard that U.K. streets are blanketed with thousands of closed-circuit surveillance cameras (CCTVs). Or maybe they were just too drunk to care – authorities say the couple spent nearly $200 on alcohol the night of their 1 a.m. street performance. The two were caught on camera having sex just yards from their home.