Mindvalley – A Global School For Humanity 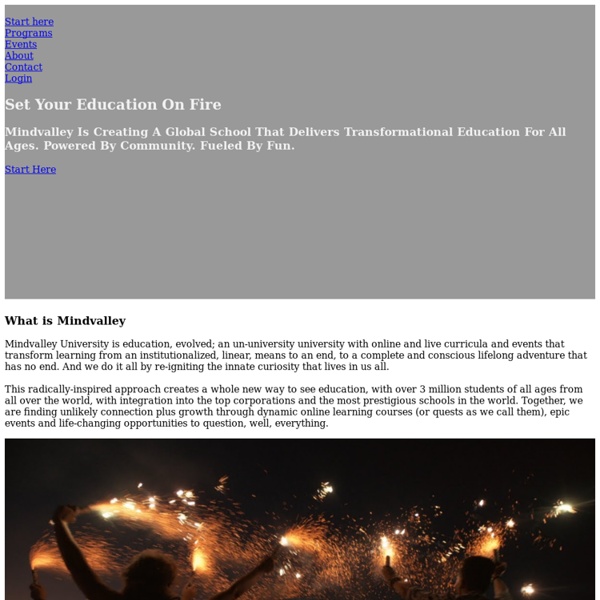 Study suggests giving kids too many toys stifles their creativity (Medical Xpress)—A team of researchers at the University of Toledo in the U.S. has found that children are more creative when they have fewer toys to play with at one time. In their paper published in the journal Infant Behavior and Development, the group describes their observational study of toddlers at play, what they learned and offer some suggestions for parents. Parents have long been subject to the opinions of others, some of which include judgments regarding the number of toys they should provide for their children. Some suggest more toys show children they are more loved, while others argue more toys is overkill and a poor substitute for parental attention.

Jessica Lahey’s ‘The Gift of Failure’: A Fear of Risk-Taking Has Destroyed Kids’ Love of Learning I’ve known the mother sitting in front of me at this parent-teacher conference for years, and we have been through a lot together. I have taught three of her children, and I like to think we’ve even become friends during our time together. She’s a conscientious mother who obviously loves her children with all of her heart. I’ve always been honest with her about their strengths and weaknesses, and I think she trusts me to tell her the truth. But when she hits me with the concern that’s been bothering her for a while, all I can do is nod, and stall for time. “Marianna’s grades are fine; I’m not worried about that, but she just doesn’t seem to love learning anymore.”

What not to do when your kid tells a lie At the ripe old age of 3, my older daughter has begun flirting with falsehoods. So far, the few lies she has told have been comically bad and easy to spot. Her dad and I usually laugh at them with an amused, “Oh, yeah?” Study Finds Montessori Schools Level the Playing Field for Disadvantaged Kids Researchers and educators have identified early childhood as one of the most important developmental periods in a person’s life, setting in place patterns that can predict life outcomes. This is not surprising given the fact that the human brain goes through profound changes in the first six years, most of which appear to be permanent. In addition, economic analyses have shown that educational interventions aimed at preschool programs have the highest return on investment. Yet, there is little consensus on what kinds of programs should be widely implemented and have the most positive effects.

12 "myths" about education in Finland debunked The success of public schooling in Finland has been a huge topic of discussion in the education community over the past year. I’ve read a few good articles about it, including Why Are Finland’s Schools So Successful?, and was impressed with what I learned. So when the image to the left started circulating on social media, I shared it along with a link to 26 Amazing Facts About Education in Finland. The image and the article weren’t in total agreement about the state of Finnish education, and neither were commenters on Facebook. That made me even more curious about what Finnish education is all about.

bigthink It’s a well-known fact that the United States is incarcerating more people than any other country in the world - and the prison system has been widely criticized for its inhumane practices, inefficiency, and high recidivism rates. Unsurprisingly, part of the solution lies in education. Studies have shown that inmates who take part in educational programs in prison are 47 percent less likely to reoffend. But some say philosophy, in particular, can benefit prisoners in ways that other subjects can’t. Indeed, studies have shown that academically, children who learn philosophy in schools perform drastically better compared to their peers.

This School in Levelfield Is Changing the Concept of Education Love reading positive news? Help The Better India grow Support our endeavor to become every Indian's source of daily inspiring positive news. Read FAQs. Some Schools Are Abolishing Homework In Favor Of Reading, And That's A Good Thing This September, the 20,000 elementary school students of Florida’s Marion County public school district will enter school with the promise that they will not be doing any more homework as part of their daily school life. The policy is introduced by the county’s new superintendent Heidi Maier. She motivated her decision with research that shows that homework does not improve achievement for younger students, but time free from school type activities is important for their development. The policy will exclude some occasional assignments, like science projects or research papers.

The Best Toys for Infant Learning Janet Lansbury: When we’re considering offering young children technology and mobile devices or other kinds of screens when they’re very, very young we have to consider, first of all, the stimulation factor. These are brand-new people to the world that are very, very sensitive and highly aware, and all of this works to their great advantage as learners and absorbers of their environment and life. We develop more in the first three years than the whole rest of our life put together, so they’re able to learn from an empty room, being at a position where they’re ideally free to move their bodies, so they’re able to turn their heads—we say start infants on their backs for that reason—and they could be fascinated by dust particles or the corner of the room or natural light coming in, a number of things, and they are learning something from that, they’re figuring something out. So when we offer technology it’s an onslaught on their senses basically. Not so much a phone but a larger screen.

Knowing the Stages of Neurological Development Can Make You a Better Parent Don’t you wish you could predict your child’s behavior with 100% accuracy? Any realistic parent knows it’s an impossible daydream, but an appealing one nonetheless. Kids will always surprise you.