YouTube. Bob Knight's Essentials of Coaching Basketball. Bobby Knight on `The Power of Negative Thinking' Safety_parents_approach_presentation_eng. 2013_11_20_Module1_Top 5 Reasons Sports Orgs Should Be On Social Media.pdf. Articles: How to Ace Your First Year of Coaching — By JJ Goddu — Volleyball Magazine Articles. When I first received word that I would be joining the Penn State women’s volleyball staff as a volunteer assistant coach, I was ecstatic. 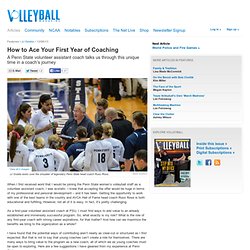 I knew that accepting the offer would be huge in terms of my professional and personal development – and it has been. Getting the opportunity to work with one of the best teams in the country and AVCA Hall of Fame head coach Russ Rose is both educational and fulfilling. However, not all of it is easy. In fact, it’s pretty challenging. As a first-year volunteer assistant coach at PSU, I must find ways to add value to an already established and immensely successful program. I have found that the potential ways of contributing aren’t nearly as clear-cut or structured as I first expected. » Own the responsibilities you are given from the outset. » Foster strong relationships with all members of the team, including staff and players. » Manage age and gender. » Focus on the process. » Commit to your role. » Have fun and be creative.

Inside Pitch magazine. Yasiel Puig exploded onto the global scene in 2013. 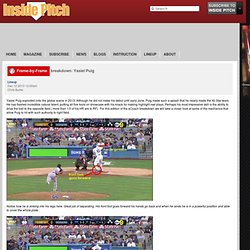 Although he did not make his debut until early June, Puig made such a splash that he nearly made the All Star team. He has flashed incredible natural talent, putting all five tools on showcase with his knack for making highlight reel plays. Perhaps his most impressive skill is the ability to drive the ball to the opposite field ( more than 1/3 of his HR are to RF). For this edition of the eCoach breakdown we will take a closer look at some of the mechanics that allow Puig to hit with such authority to right field. Notice how he is sinking into his legs here. What a power filled position! As he starts to turn around his spine notice how the weight transfers into his front side with the drive of the back foot and knee. Because of his ability to create and maintain his spine angle he can hit this outside corner pitch in a connected position. I love his lower half in this frame. What a finish! Coaching Association of Canada.

Coaching Principles UKCC. Is Coaching an Art or a Science? 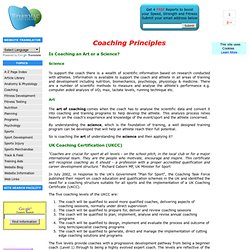 Science To support the coach there is a wealth of scientific information based on research conducted with athletes. Information is available to support the coach and athlete in all areas of training and development including nutrition, biomechanics, psychology, physiology & medicine. There are a number of scientific methods to measure and analyse the athlete's performance e.g. computer aided analysis of VO2 max, lactate levels, running technique etc.

Art The art of coaching comes when the coach has to analyse the scientific data and convert it into coaching and training programs to help develop the athlete. By understanding the science, which is the foundation of training, a well designed training program can be developed that will help an athlete reach their full potential. So is coaching the art of understanding the science and then applying it? Canadian Sport for Life (CS4L) - Improving Quality of Sport in Canada. Canadiansportforlife.ca. Canadiansportforlife.ca. Children, youth and adults need to do the right things at the right time to develop in their sport or activity – whether they want to be hockey players, dancers, figure skaters or gymnasts. 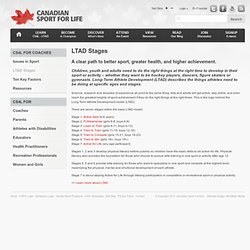 Long-Term Athlete Development (LTAD) describes the things athletes need to be doing at specific ages and stages. Science, research and decades of experience all point to the same thing: kids and adults will get active, stay active, and even reach the greatest heights of sport achievement if they do the right things at the right times. This is the logic behind the Long-Term Athlete Development model (LTAD). There are seven stages within the basic LTAD model: Stage 1: Active Start (0-6 years) Stage 2: FUNdamental (girls 6-8, boys 6-9) Stage 3: Learn to Train (girls 8-11, boys 9-12) Stage 4: Train to Train (girls 11-15, boys 12-16) Stage 5: Train to Compete (girls 15-21, boys 16-23) Stage 6: Train to Win (girls 18+, boys 19+) Stage 7: Active for Life (any age participant) >> Learn more about LTAD.

Canadiansportforlife.ca. LTAD has been developed to answer issues that have historically hampered athlete development in many Canadian sports. 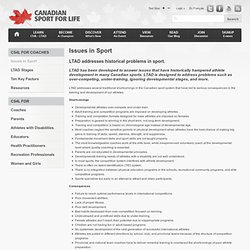 LTAD is designed to address problems such as over-competing, under-training, ignoring developmental stages, and more. LTAD addresses several traditional shortcomings in the Canadian sport system that have led to serious consequences in the training and development of our athletes. Shortcomings Developmental athletes over-compete and under-train.