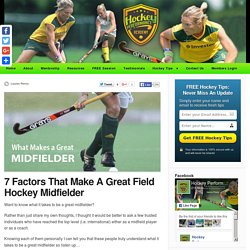 Rather than just share my own thoughts, I thought it would be better to ask a few trusted individuals who have reached the top level (i.e. international) either as a midfield player or as a coach. Knowing each of them personally I can tell you that these people truly understand what it takes to be a great midfielder so listen up… Based on their responses here is a breakdown of these 7 factors. This is the first part of the 'what makes a great player series'... What Makes A Great Field Hockey Midfielder? #1: Ability To Change The Game Former South African u21 Junior National Coach Andi Bernstein suggests the best way to change a game is to develop the ability to break through oppositions defensive line. “This can be done by accelerating into space and carrying the ball in front so that you can look up and make better informed decisions.” #2: Ball Protection Former u21 National Coach, Andi Bernstein #3: Use of 3D skills. 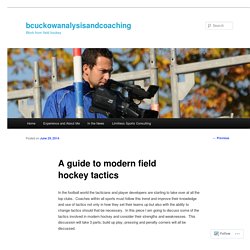 Coaches within all sports must follow this trend and improve their knowledge and use of tactics not only in how they set their teams up but also with the ability to change tactics should that be necessary. In this piece I am going to discuss some of the tactics involved in modern hockey and consider their strengths and weaknesses. This discussion will take 3 parts; build up play, pressing and penalty corners will all be discussed. Build up play The first three systems I am going to discuss are the systems I was introduced to as I began hockey. The first system I want to discuss is the system I was brought up with. Diagram 1. Again going back to my transition from football to hockey, the next system I played was 4-5-1. Diagram 2. The next system of play is again another basic system, 4-4-2. 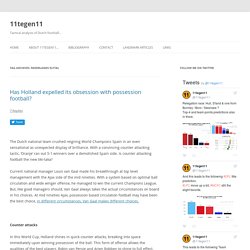 A fluid first half performance, characterized by lots of positional interaction among all forward and midfield players, ensured the victory, but the second half fade left an aftertaste of slight disappointment. Holland’s run in numbers Current national team manager Bert van Marwijk took charge 2008, and his first job was to lead Holland through the qualifiers for the 2010 World Cup. Eight wins in eight matches followed. In this period, Holland also played 13 friendly matches, including the preparation campaign for the 2010 World Cup main tournament, winning 6, drawing 6 and losing only one match, Van Marwijk’s second match in charge, where Holland gave away a 1-0 lead to end up losing 1-2 at home against Australia.

The starting line-ups. The 4-2-3-1 in names and execution Moldova’s game plan Contrasting halves Midfield dilemma’s In the end. 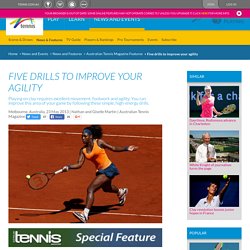 You can improve this area of your game by following these simple, high-energy drills. Melbourne, Australia, 23 May 2013 | Nathan and Giselle Martin | Australian Tennis Magazine 57 25 Agility is a key characteristic for success in tennis where you speed up, slow down and constantly change direction – all the while maintaining balance and control in some high pressure situations.

Being agile not only helps you get to the ball faster and prepare better for shots, but it also allows you to have the proper balance in order to hit the ball. The following agility exercises are tennis specific, can be performed holding your racquet, and should be performed at 100 percent intensity. So grab a partner and give these drills a go – before hitting is best – ensuring you’ve had a complete warm-up. Forward/Backward Z Drill Place eight cones on the court as shown, two metres apart. Acceleration/Deceleration Z Drill T Drill Cone Calls. Welcome to TheDrillBook.com : Developing a New Generation of Coaches.