Firstround. In sports, the name on the back of a jersey can garner more attention than the one on the front. 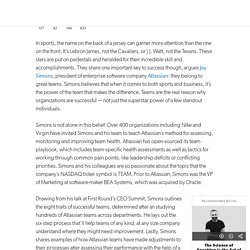 It’s Lebron James, not the Cavaliers, or J.J. Watt, not the Texans. These stars are put on pedestals and heralded for their incredible skill and accomplishments. They share one important key to success though, argues Jay Simons, president of enterprise software company Atlassian: they belong to great teams. Simons believes that when it comes to both sports and business, it’s the power of the team that makes the difference.

Simons is not alone in this belief. Drawing from his talk at First Round’s CEO Summit, Simons outlines the eight traits of successful teams, determined after an studying hundreds of Atlassian teams across departments. How You’re Measuring Performance Isn’t Enough Early on at Atlassian, Simons and his colleagues regularly assessed individual performance, as most companies do. The Eight Elements of Healthy Teams Proof of concept. Shu-Ha-Ri For On Boarding New Team Members - Dev Teams - Agile Uprising. I was recently working with a team that was billed as a "learning team" so all new engineers spent time on this team before moving on to project teams. 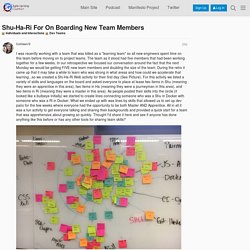 The team as it stood had five members that had been working together for a few weeks. In our retrospective we focused our conversation around the fact that the next Monday we would be getting FIVE new team members and doubling the size of the team. During the retro it came up that it may take a while to learn who was strong in what areas and how could we accelerate that learning...so we created a Shi-Ha-Ri Web activity for their first day (See Picture). For this activity we listed a variety of skills and languages on the board and asked everyone to place at lease two items in Shu (meaning they were an apprentice in this area), two items in Ha (meaning they were a journeyman in this area), and two items in Ri (meaning they were a master in this area). The Agile Executive. FearlessJourney: the game that gets your team UnStuck. 10 ways to better lead your agile team « The Agile Warrior. Leadership is one of those personal things I find hard to give advice on. 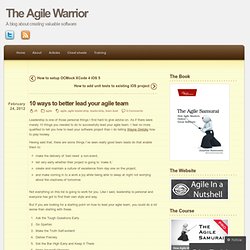 As if there were merely 10 things you needed to do to successfully lead your agile team. I feel no more qualified to tell you how to lead your software project than I do telling Wayne Gretzky how to play hockey. Having said that, there are some things I’ve seen really good team leads do that enable them to: make the delivery of ‘bad news’ a non-event,tell very early whether their project is going to ‘make it,’create and maintain a culture of excellence from day one on the project,and make coming in to a work a joy while being able to sleep at night not worrying about the craziness of tomorrow.

Not everything on this list is going to work for you. But if you are looking for a starting point on how to lead your agile team, you could do a lot worse than starting with these. Let me expand on each of these points a little. 1. How much experience does your team have? 2. The premise is pretty simple. Why? Most things work…until they don’t. I have a secret to tell you when it comes to facilitating agile teams. 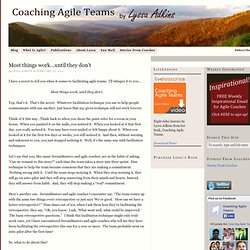 I’ll whisper it to you… Most things work, until they don’t. Yep, that’s it. That’s the secret. Whatever facilitation technique you use to help people communicate with one another, just know that any given technique will not work forever. Think of it this way…Think back to when you chose the paint color for a room in your house. Let’s say that you, like many ScrumMasters and agile coaches, are in the habit of asking, “Can we commit to this story?” Here’s another one. So, what to do about this? Notice the impact. Have a full toolkit. Ask for openness. Come back to the “why.” Get out of the middle.