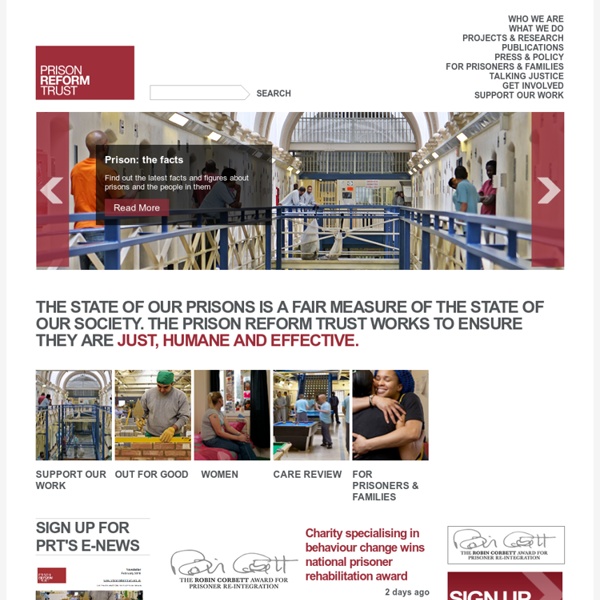 Doing prison: Experiences of women in the UK prison system Ethnographic research is concerned with the lived experiences of participants in particular social groups or settings, and has been central to sociological understandings of imprisonment since the 1940s. As far as possible, ethnographers immerse themselves in the social world they are seeking to understand. While there are clear limits to the extent to which a researcher can participate in prison life, all ethnographic research shares an interest in culture and meaning. Over eight months in 2007-8, Abigail Rowe conducted an ethnographic study of coping and social support in two women's prisons in England, drawing on extensive observations and interviews with staff and prisoners. Here she shares some of her findings. Criminal Justice policy in England and Wales is highly contested and politically charged. 9 – to punish or to rehabilitate, to follow evidence or gut instinct – are mirrored at the heart of government. In the wake the Ministry of Justice's 2010 Green Paper, Breaking the Cycle

FAKTSA: An Acronym for Remembering Key Resume Enhancers Printer-Friendly Version by Katharine Hansen, Ph.D. What are the most important things to remember about writing an effective resume? They can be encapsulated in a six-letter acronym, FAKTSA, in which the letters stand for: FocusAppearanceKeywordsTransferrable SkillsAccomplishments Focus A sharp focus is an extremely important resume element. SENIOR EXECUTIVE Specialize in raising the bar, creating strategy, managing risk, and improving the quality and caliber of operations. Specific verbiage at the top of your resume is always better than a vague or general wording. Appearance When your resume is seen by the human eye, it needs to catch attention and be simultaneously reader-friendly. Keywords More than 90 percent of resumes are searched for job-specific keywords. Transferable Skills One of the most important concepts you will ever encounter in the job-hunting process is that of transferable job skills. Accomplishments Many resumes are duties-driven when they should be accomplishments-driven.

FPH :: Home Sick and suicidal: plight of women in UK jails | Society | The Observer On the day Diane Kent set herself on fire in her cell at Low Newton prison, County Durham, two months ago, she had already tried to hang herself twice and asked a prison officer to take away her lighter because she was scared of harming herself. According to incomplete prison records, her request was refused. How a woman who had repeatedly committed such extreme acts of self-harm was able to evade the observation of officers for long enough to set fire to herself, why she had a lighter in her possession, and why her request to have it taken away was denied are just a few of the reasons her family and her solicitor are calling on the government to hold an independent inquiry into Kent's case, instead of leaving it to the usual investigation by the prison service. For more than five weeks after her suicide attempt, 27-year-old Kent lay in a medically induced coma in the intensive-care unit at the Royal Victoria Infirmary in Newcastle. The findings have raised strong feelings among MPs.

Authentic Leadership Self-Assessment Questionnaire Unauthentic leaders hide behind masks This questionnaire contains statements about authentic leadership. Next to each statement, circle the number that represents how strongly you feel about the statement by using the following scoring system: Almost Always True — 5 Mostly True — 4 Occasionally True — 3 Seldom True — 2 Almost Never True — 1 Be honest about your choices, as this will help you to reflect on your strengths and areas that need improvement. Authentic Leadership Survey Scoring 1. 2. 3. 4. 5. Interpreting Your Score This self-assessment questionnaire is designed to measure your authentic attributes by assessing the five dimensions of authentic leadership (for more information see, Authentic Leadership and Social Influence): Purpose - Passion: Leaders understand their purpose, which is driven by their passion. By studying and reflecting upon your scores for each of these dimensions, you can determine your stronger and weaker attributes. Reliability and Validity Next Steps

Seize the opportunity to be a new generation place-maker This week saw the launch of Public Practice, a social enterprise aiming to recruit a new generation of place-making planners for local authorities, beginning with London and the South East. Developed through the Mayor of London’s ‘Good Growth by Design’ programme it counts the Mayor, the Local Government Association and developers British Land, Berkeley Group and housing association Peabody among its founding partners. Chief executive and moving force, Finn Williams, explains that the scheme aims to place outstanding candidates from architecture, planning and urban design, offering them an alternative career path focused on shaping places for the public good. Recruitment of the first cohort of 16 ‘Associates’ got under way this week. Williams himself started out as an architect at the Office of Metropolitan Architecture (OMA) before making the switch to planning, first at Croydon Council and then the Greater London Authority. Text by Neal Morris.

Helping troubled families turn their lives around - Policies - Inside Government Issue Troubled families are those that have problems and cause problems to the community around them, putting high costs on the public sector. The government is committed to working with local authorities and their partners to help 120,000 troubled families in England turn their lives around by 2015. Actions As part of the Troubled Families programme, the government will work alongside local authorities to: get children back into school reduce youth crime and anti-social behaviour put adults on a path back to work reduce the high costs these families place on the public sector each year We will encourage local authorities to work with families in ways the evidence shows is more effective, such as: The government is increasing local authority budgets by £448 million over 3 years on a payment-by-results basis. Background The Troubled Families programme was launched by the Prime Minister in 2011 and is led by Louise Casey CB. Read more about family intervention work with troubled families.

ANFA | Academy of Neuroscience for Architecture