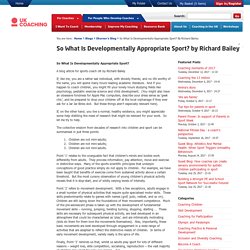 A blog article for sports coach UK by Richard Bailey If, like me, you are a rather sad individual, with shoddy friends, and no life worthy of the name, you will spend many hours reading academic literature. And if you happen to coach children, you might fill your lonely hours studying fields like psychology, pediatric exercise science and child development. (You might also have an obsessive fondness for Apple Mac computers, describe your dress sense as ‘geek chic’, and be prepared to drop your children off at the local orphanage if they ever ask for a Jar Jar Binks doll.

But these things aren’t especially relevant here). Cult or Culture: What team are you creating? – Science of Running. On a recent trip to Seattle, if you asked my hosts, Steve Fassino and Phoebe Wright, what the major topic of conversation was for the weekend, they’d likely answer cults. 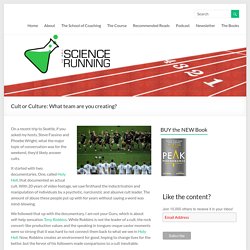 It started with two documentaries. One, called Holy Hell, that documented an actual cult. With 20 years of video footage, we saw firsthand the indoctrination and manipulation of individuals by a psychotic, narcissistic and abusive cult leader. The amount of abuse these people put up with for years without saying a word was mind-blowing. We followed that up with the documentary, I am not your Guru, which is about self-help sensation Tony Robbins. ASA conducts gender workshop, a step towards spreading gender equality through sports. The Martha Farrell Foundation supports practical interventions which are committed to achieving a gender-just society, by working with youth on gender issues, mainstreaming gender within organisations and raising awareness on sexual harassment at the workplace. 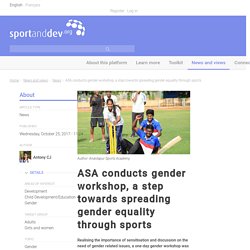 The workshop held for ASA coaches helped them to deliberate and understand gender specific issues, especially within their centres, through various engaging activities. The ‘ice breaker’ started with assessing gender stereotypes commonly prevalent through various group activities like visualising, drawing and other creative mediums – realising that gender stereotypes are rooted in each one’s culture. Moreover, the coaches then discussed specific issues that they faced in increasing the participation of girls, and how these can be overcome by approaching issues through a ‘gender lens’. Dr. Richard Bailey, On What We Need to Make Coaching a True Profession. Junior sport: Forget about winning, just let the kids play.

Analysis Updated The scene is an under-15s soccer match in Sydney's south on a warm autumn Sunday morning. 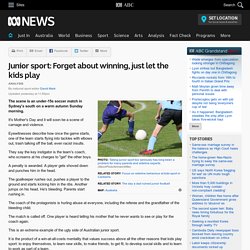 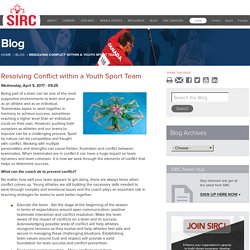 Teammates aspire to work together in harmony to achieve success, sometimes reaching a higher level than an individual could on their own. However, pushing both ourselves as athletes and our teams to improve can be a challenging process. Sport by nature can be competitive and fraught with conflict. The E-Q Games Based Coaching Model. Rugby commits to national coaching panel. A summit, featuring some of the sharpest minds in Australian rugby, has committed to establishing a national coaching panel. 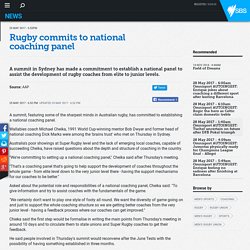 Wallabies coach Michael Cheika, 1991 World Cup-winning mentor Bob Dwyer and former head of national coaching Dick Marks were among the 'brains trust' who met on Thursday in Sydney. Australia's poor showings at Super Rugby level and the lack of emerging local coaches, capable of succeeding Cheika, have raised questions about the depth and structure of coaching in the country. "We're committing to setting up a national coaching panel," Cheika said after Thursday's meeting. Supporting mental wellness - Play by the Rules - Making Sport inclusive, safe and fair. There is a new phrase you are likely to hear more of around sports clubs in coming years — mental health literacy. 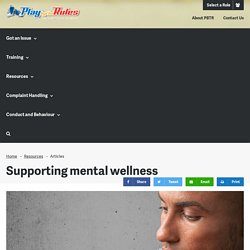 It is the concept of increasing the ability of players, parents and coaches to recognise the signs of mental illness among people in their club, and to be able to initiate a conversation and point to resources that might help. Mental wellness is not something that has typically been on the radar of clubs, but several high profile athletes have recently revealed their battles with mental health issues, and sports administrators are looking for ways to act, including Professional Footballers Association chief executive Adam Vivian who recently told the Huffington Post that the code is failing players in this regard. Former world number one triathlete and performance psychologist Gaylene Clews says the use of common sports phrases such as ‘mental toughness’ needs to be re-examined.

‘Mental toughness in my mind is actually metacognition,’ Clews says, referencing her book title. Great Coaching For All Ages. When I'm talking about 'Great Coaches' in this context, I'm not only talking about great coaches of champion teams, but also, what makes a great coach of beginners, and developing players? 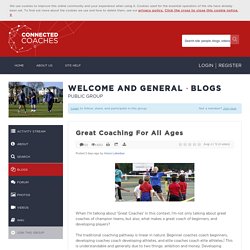 Most of what has been written on 'great coaching' is simply looking at a coach who won, and then working out what he/she did. It makes sense to do this, we want to learn from success. Coaching boys into men via the sports field. Coaching Boys into Men is an initiative set up to engage sports coaches as mentors for young athletes, teaching them the importance of respect for themselves and others, particularly women. 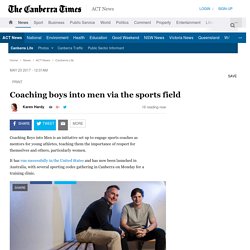 It has run successfully in the United States and has now been launched in Australia, with several sporting codes gathering in Canberra on Monday for a training clinic. Facilitated by Mark Wadie, founding director of the I Respect Initiative and violence prevention advocate, the program centres around training and motivating coaches to teach their players about healthy relationship skills and that violence never equals strength. But it does so much more than that. "Coaches play a hugely influential and unique role in the lives of young men," says Wadie. "They are in a key position to positively influence how young men think and behave, both on and off the field. " Digging for diamonds: The talent identification process values potential over performance. PEAK PERFORMANCE: Adolescents reach physical maturity at different stages, making the job of talent identification that much harder Talent identification (TiD) is the recognition of current participants with the potential to become elite performers Physical mismatches during adolescence can camouflage talents in others, which have yet to emergeCurrent performance should not be the only gauge for detecting talent. 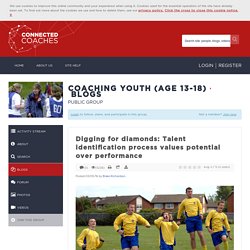 There’s more to TiD than how well individuals perform on any given dayThe complexity of the biological, psychological and social factors at play within developing performers makes trying to spot potential in young people very much a gambleRelative Age Effect (RAE) can give some athletes an initial advantage which makes it challenging for others to catch upPsychological development is just as important as physical, tactical and technical advancement but can be more challenging to observe and assess. Sport Injury - Healing the Mind and Body. Author: SIRC Most athletes, competitive through recreational, experience injury in their sport at some time. There are many practitioners out there who can help heal the physical symptoms of the injury from the family doctor to the physical therapist.

But dealing with the physical side of injury is only half the battle. What we cannot forget to address is the importance of healing the mind of the injured athlete. Blog — Wired To Play. Winning Pathways Workshop. Coaching plan for England launches. Enterprising Coaches can help grow sport in a sustainable way...from Sports Marketing Network. Sports Coaching Archives. Coaching Association of Canada. Canadiansportforlife.ca. Talent development vs. talent identification: Give kids a chance - Active For Life. The tryouts for the regional “select” team are next week, and your child’s coach is singing the glories of playing on the super team with the best-of-the-best. There’s prestige and status, and something more: He says this is the fast track to turning pro! Wow.

Author: Jason Dunkerley Wednesday, March 23, 2016 - 09:00 As the old adage says, there are those who teach and those who do. In the world of sports, there are both great athletes and great coaches. Want to keep kids in sport? Then make it fun - The Drum. Opinion Updated There's a real problem in Australia of kids dropping out of sport. To fix it we should look at why children like to play games in the first place. My son's soccer team seems to have worked it out, writes Paul Kennedy. The dropout rates in junior sport in Australia are a big worry. Untitled. Untitled. Responsible Coaching Movement. Skills taught by volleyball coaches and their relationship to long term athlete development. 3 Ways Coaches Can Inspire Their Athletes - Changing the Game Project. Sport Information Resource Center.