For GW basketball players, most meaningful part of workout is hitting the Wall. Just after 7 a.m. one sunny morning last week, a dozen young men in camouflage t-shirts and basketball shorts jogged up to the west side of the Vietnam Veterans Memorial, where they slowed down, and quietly entered the park. 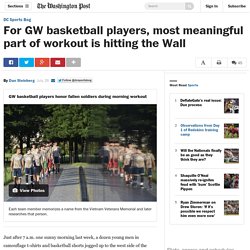 Heads down, with lowered voices, they spread out along the length of the memorial, occasionally pausing to peer up at some of the more than 58,000 names, or to run their fingers along the wall’s surface. Four minutes later, the George Washington men’s basketball team gathered in a huddle at the wall’s east end, next to a small sign requesting visitors “honor those who served.”

The Colonials were about to begin an hour-long workout around the Mall, what has become the centerpiece of their offseason conditioning program. First, though, they paused to reflect. “You kind of get stuck in the moment,” forward Kevin Larsen said later, describing what those few minutes of silence were like. How Larry Krystkowiak and Delon Wright Brought Utah Basketball Back to National Prominence « It’s been 11 years since the late Rick Majerus, draped in that cream sweater, was roaming the sideline at the University of Utah, turning a program with a proud tradition into a national powerhouse. 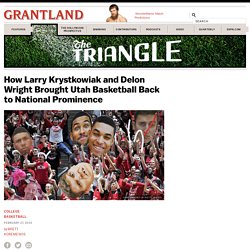 In his 15 seasons with the Utes, not a single team under Majerus’s watch finished with a losing record. He not only won, but he attracted future NBA stars like Andrew Bogut, Keith Van Horn, and Andre Miller to what, at the time, was essentially a mid-major while also nearly capturing a national title in 1998. After Majerus left the program in 2004, the Utes began to lose their foothold among the nation’s elite. Majerus’s successor, former Eastern Washington head man Ray Giacoletti, started off with a bang, leading the Utes to the Sweet 16 in 2005, but he followed that up with successive losing seasons, which led to his dismissal. Utah had to get its next hire right. How Brewster Academy Basketball Became Country's Best. How Brewster Academy Basketball Became Country's Best. How Urban Meyer Took the Buckeyes to School. 7 Strategies to Select Your Team Captains - Part 1.

7 Strategies to Select Your Team Captains - Part 1 Jeff Janssen, Janssen Sports Leadership Center Trying to figure out how to determine your team captains for the upcoming season? 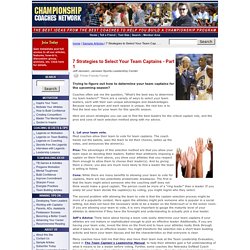 Coaches often ask me the question, "What's the best way to determine my team leaders? " There are a variety of ways to select your team leaders, each with their own unique advantages and disadvantages. College Football's Coaching Nun Preaches Positive Thinking in N.C.A.A. Division III. Photo DULUTH, Minn. — The celebration after the College of St. 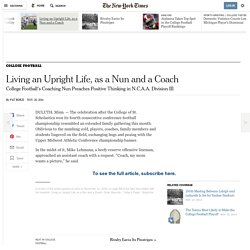 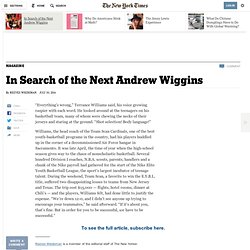 He looked around at the teenagers on his basketball team, many of whom were chewing the necks of their jerseys and staring at the ground. “Shot selection! Body language!” Williams, the head coach of the Team Scan Cardinals, one of the best youth-basketball programs in the country, had his players huddled up in the corner of a decommissioned Air Force hangar in Sacramento. Q&A: Cavs Coach David Blatt on LeBron, Princeton, and ‘The Natural’ « What a life for David Blatt, and what a last couple of weeks. 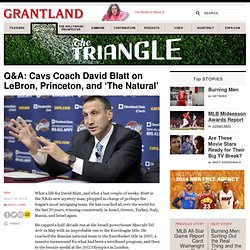 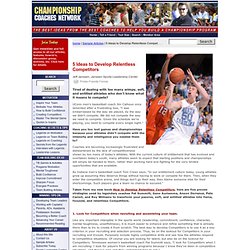 Coach The Team, Not The Individual. One thing that I've come to believe more and more as a head coach is the effectiveness of coaching the entire team as opposed to coaching the individual. 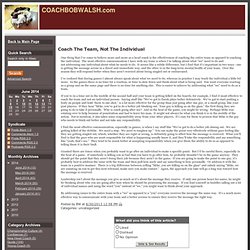 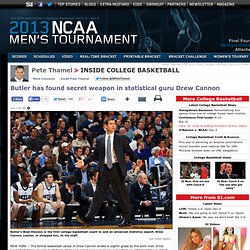 USA TODAY Sports NEW YORK -- The formal basketball career of Drew Cannon ended in eighth grade as the sixth man of his junior high team. Www.sloansportsconference.com/wp-content/uploads/2013/The Dwight Effect A New Ensemble of Interior Defense Analytics for the NBA.pdf. Www.sloansportsconference.com/wp-content/uploads/2014/02/2014_SSAC_Pointwise-Predicting-Points-and-Valuing-Decisions-in-Real-Time.pdf. What LeBron James Knows About Analytics that You Should Too - Michael Schrage. By Michael Schrage | 2:00 PM May 3, 2013 The most useful question I’ve learned to ask people about analytics is, “What do you plan to do with them?” 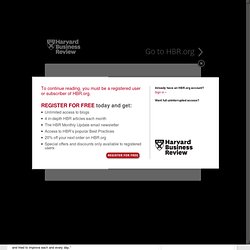 By far the most interesting answer I’ve gotten comes from basketball superstar LeBron James: Hire Hakeem Olajuwon. Until his championship 2011-2012 season, NBA cognoscenti viewed James as a phenomenally gifted loser. He could do everything but win when it mattered most. No one doubted his desire or ability, but they demonstrably weren’t enough. What do you need to know and emulate about LeBron James’ journey to championship level? NBA What do the Heat mean to LeBron? How much is trust worth? How does LeBron James properly assign it a value? James works with a coach who butts heads with him and doesn't care at all -- at all -- when James dislikes him or is mad at him. James also works with a coach who listens to him when the season is on the brink, makes a move James has requested and then lets James have all the credit for it afterward.

What's that worth? The leader strong enough to stand up to a King but also gentle enough to get out of his way? James works with a legend president and quiet owner who will hurt his feelings by sending away friend and champion Mike Miller. Leadership that you trust is helping even on the days when it hurts? James works with two friends who have frustrated him at times: Dwyane Wade while sitting out one-third of this season's skirmishes to prepare for these last two big fights, Chris Bosh while shrinking against bad matchups that push him outside.

It was late against the Pacers in Game 2. Even if You're Not a Spurs fan, This Video Will Allow You to Appreciate How Beautifully They Play. - Viral Hoops. The San Antonio Spurs dynasty is a thing of beauty to basketball purists because they epitomize the definition of a true team. The NBA's Improbable Pipeline: How alumni from tiny Emerson college infiltrated pro basketball's front offices.

Q&A with Tom Thibodeau of Chicago Bulls - ESPN Chicago. "I'm Out" Phil Jackson tells the story about how Scottie Pippen took himself out of a playoff game against the Knicks in the final seconds in his book "Eleven Rings. " All you know about basketball is wrong - TrueHoop Blog. Winning in The Post-Season. The post-season has a different feel to it. Conference tournaments have a different intensity to them for a number of reasons.

For one, the good teams and the bad teams have been established. The standings over a full season make that pretty clear. DataBall « On February 13, 2013, the San Antonio Spurs found themselves in a surprisingly close game in Cleveland. Late in the fourth quarter, Cavs rookie shooting guard Dion Waiters made the biggest basket of his young NBA career, knocking down a tough jumper to give his team a two-point lead with 9.5 seconds left. Smelling an upset, Cavs fans at Quicken Loans Arena started going bananas. The Spurs called a timeout, advanced the ball to half court, and decided to run one of their favorite plays. Matt Bonner inbounded the ball to Tony Parker, who stood 30 feet from the rim. Parker quickly attacked the left wing, where a massive Tim Duncan screen forced Tyler Zeller to switch onto Parker. Kawhi Leonard was standing unattended in the weakside corner. The box score reduces that sequence to a few basic integers; Kawhi Leonard is credited with one field goal attempt, one field goal made, and three points scored.

NERR - New England Basketball Recruiting Report. Billy Donovan 2010 Florida Coaches Basketball Clinic Notes. Figure It Out On The Run. Sitting on the bench as an assistant coach, I hated to feel helpless. "What Are Your 3 Most Important Keys?" When In Doubt, Do Nothing. In "Eleven Rings" Phil Jackson emphasizes the simplicity of his leadership approach. The Losses of Dan Gable. Feb. 12, Iowa City, Iowa. Kliff Kingsbury Hockumentary. Pick-Up Game Rules. Doc Rivers hides $2600 in the Staples Center ceiling - Ball Don't Lie - NBA Blog. It seems strange enough to be made up, but the story is completely true.

The Michigan Wolverines' unique recruiting strategy under John Beilein. The Sports Guy breaks down the Miami Heat's win streak. When I wrote my basketball book four years ago, I included a section about the NBA’s 10 most unbreakable records. Ranking first: Wilt Chamberlain averaging 50 points per game for an entire season, something we’re never seeing again unless (a) some lunatic parent pumps enough HGH into his young son to create an 8-foot-2 basketball player, (b) they make 3-pointers worth six points, or (c) LeBron and Serena Williams decide to start having kids.