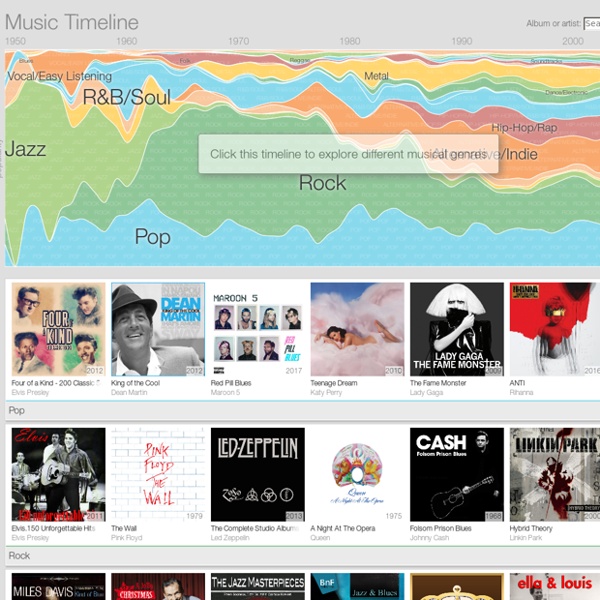 A Beginner's Guide to No Wave More often than not, the official history of New York’s late ‘70s scene ends in the scuzzy confines of CBGBs, and the birth of American punk (or New Wave, to use its proper nomenclature). Equally reductive is the historian’s conception of the American punk bands themselves, who often are assessed only in relation to the role they would play in the genesis of British punk, with CBGB acts like Richard Hell & The Voidoids, The Ramones and Television reduced to mere footnotes in the greater story of the Pistols and co. But as attentions turned to London, back in Manhattan and just at the point the history books end, something very exciting was happening. They called it No Wave.

List of timelines From Wikipedia, the free encyclopedia This is a list of timelines currently on Wikipedia. §Types[edit] §General timelines[edit] §History[edit] Geologic time scale Online exhibits Geologic time scale Take a journey back through the history of the Earth — jump to a specific time period using the time scale below and examine ancient life, climates, and geography. You might wish to start in the Cenozoic Era (65.5 million years ago to the present) and work back through time, or start with Hadean time (4.6 to 4 billion years ago)* and journey forward to the present day — it's your choice. [Note: "mya" means "millions of years ago"] Ways to begin your exploration:

30 Albums That Define Cool Any album “list” is going to be incomplete. It’s going to be filled with albums you agree with, artists you hate and some sort of commentary that you probably disagree with. This list is no different. Brief Timeline of American Literature and Events, 1620-1920 Brief Timeline of American Literature and Events: Pre-1620 to 1920 This timeline provides a short chronology of events in American history and literature. It is linked to course pages and bibliographies as well as to a set of more general linked resources: pages on American authors, literary movements, and American literature sites. Each author page contains a picture (if available), a bibliography (if available), links to major sites about the author, and links to works online.