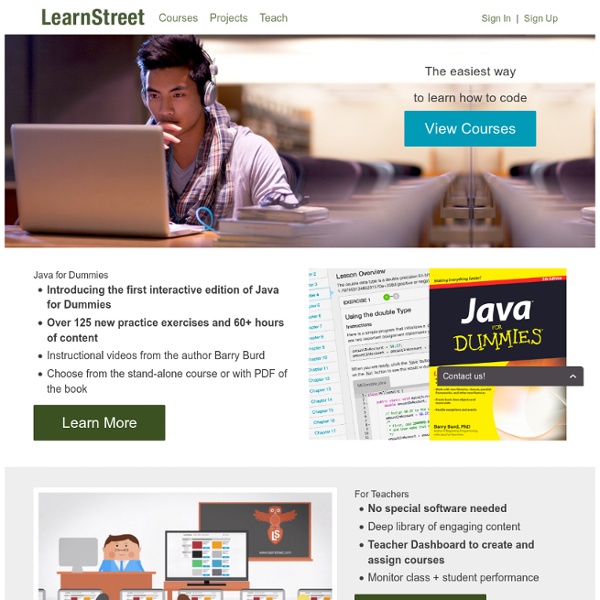 Learn Moana: Wayfinding with Code Grades 2+ | Blocks Minecraft Hour of Code Make Music with Scratch Grades 2-8 | Blocks, Scratch Gumball's Coding Adventure Free textures for your next web project. Nothing like a field of beautiful flowers. Download Download These lovely water-colorful dots will make your designs pop. 8 Tips To Come Up With Winning Ideas When You Are Brainstorming Alone Brainstorming conjures up images of teams trying to hash out wild ideas around complex problems. Two heads think better than one, but brainstorming is as much about individual problem solving as it is about the group. The energies required for solo brainstorming are probably more, but the methods to build up the “storm” of ideas aren’t that different. One of our readers had asked – How do writers at MakeUseOf find ideas for content? It’s a daily ritual.

Code Monster from Crunchzilla <h2>Code Monster gets kids excited about programming. It is a combination of a game and tutorial where kids experiment with learning to code. <p> Code Monster use Javascript. Please enable Javascript if you want the play with the Code Monster. Otherwise, Code Monster will not be able to play with you. Why (And How) To Start Teaching Coding In School Fueled by an incredible demand in the workforce for proficient programmers and the need to teach critical thinking skills, the coding movement in schools has exploded. Furthermore, we all communicate through technology, so we should at least know the basic premise of coding because the gadget sitting in our pocket, or on our desk, should not be a mysterious black box to us or our students. Just like writing, multimedia, art, and music are mediums to show ideas, coding can be another form of expression. Learn To Code, Code To Learn We need to think beyond the syntax of a programming language and focus on how using coding as a learning tool will not only give students a key 21st Century Skill but also allow them to demonstrate their learning through another creative outlet. Mitch Resnick, co-founder and creator of the MIT Media Labs, coined the phrase “Learn to code, code to learn.”

Tiny Circleslider: A lightweight circular carousel for jQuery What is it? Tinycircleslider is a circular slider / carousel. That was built to provide webdevelopers with a cool but subtle alternative to all those standard carousels. Tiny Circleslider can blend in on any wepage. It was built using the javascript jQuery library. Features Diagrams: Tools and Tutorials Advertisement Being a web-developer means not only being able to design web-sites or program their functionality. Sometimes it also means to be able to explain complex issues clearly and be able to present to your potential customers reasonable and convincing arguments – in order to find the best compromise between the customer’s wishes and the standards you respect. In fact, it is essential to make sure the customer understands which advantages you are actually offering and why this or that layout and markup are better for a given web-project. Developing web-sites over the last few years, we’ve been stumbling over the same problem over and over again: how can I visualize my idea easily and quickly?

9 Websites to Learn Coding As Compiled by TED May 15, 2014 Learning how to code has become an essential skill for the 21st century students. The importance of coding lies in the fact that it enables students to learn a slew of other important skills all along the way. In his popular TED talk " Let's Teach Kids to Code", Mitch Resnick of MIT Media Lab outlined a set of skills that students get to learn from coding . These skills are also relevant for all other sorts of activities: Code Racer that is featured in TED article has become Treehouse which brings the number of websites to 9. 1- Code Academy os-x-mavericks-10-9-retail-vmware-image-t7981468 Full release notes can be found here: First version of the OS X Mavericks Retail VMware Image. Contains OS X Mavericks GM, and is compiled entirely from stock. Boots on average around a minute although it can be in as little as 25 seconds sometimes., but make sure to give up to 10 just in case. Recommended you watch the setup video contained in the download to get it working properly and avoid unobvious mistakes, anything covered in that won't be addressed in the comments. First boot will be slower compared to future startups.

Teach Coding in the Classroom: Resources from ISTE '14 I was super excited to attend Hack Education (originally called “EdubloggerCon”), an all-day unconference held the Friday before the formal start of ISTE 2014. This interactive day of learning, now in its eighth year, was touted to me as the event to attend in Atlanta, and it did not disappoint. The informal, small-group conversations were inclusive and welcoming. The "rule of two feet" meant that if you needed to move, you were encouraged. And session topics were diverse -- on the schedule were discussions about maker education, augmented reality, design thinking, game-based learning, coding in the classroom, digital storytelling, and many, many more!

25 Amazing Responsive jQuery Slider Plugins With almost every aspect of the internet going mobile, more and more web developers than ever before are being hired primarily to ensure that websites acquire responsive capabilities. Indeed, as the mobile computing continues to heat up, the demand for responsive WordPress templates, HTML themes, and plugins is likewise on the rise. Among the web elements that need to go responsive to keep up with the times, are the image showcase mechanisms of websites. We are referring here of sliders, carousels, galleries, accordions and others which are common features of websites and looks great on most sites using a to show off key content and images.

CSS For Bar Graphs Having a working knowledge of XHTML and CSS when developing applications is a big help in knowing what can be done client-side and what should be generated server-side. Recently we’ve had to tackle some interesting visualizations which we coded in XHTML and CSS. The method we used, while fairly simple, was a big help to the engineer and created a very flexible and inexpensive solution. We thought we would share our solution and code in case anyone else ran against similar situations. Update

A Great New Tool to Teach Kids Coding September 23, 2014 Code Studio is a newly released platform geared towards helping students from kindergarten to high school learn the different coding concepts. Code Studio which is a product of the popular nonprofit group Code.org known for its relentless efforts to make coding part of the curricula. Code Studio, as is explained in this excellent review, provides a variety of features that set it apart from other coding platforms. Most important of them all is its integration of HTML5 which makes it accessible through different browsers. Code Studio also provide coding lessons tailored for each age group and grade level. By completing these lessons, students are expected to be able to create their own games and apps to share with others using popular social networking sites.