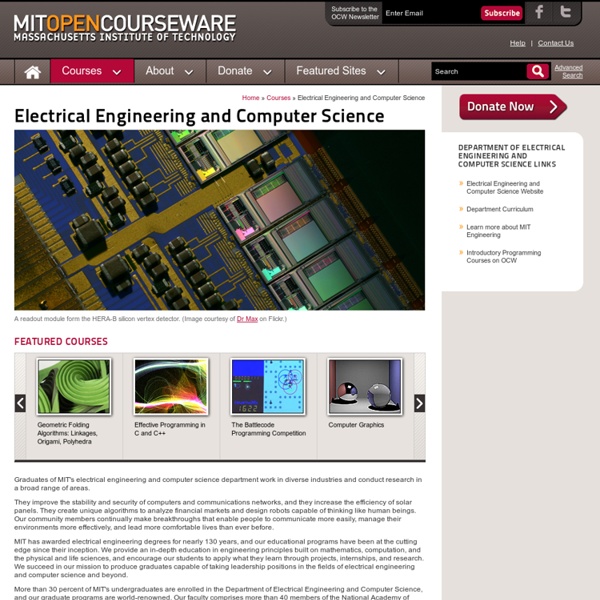 A readout module form the HERA-B silicon vertex detector. (Image courtesy of Dr Max on Flickr.) Graduates of MIT's electrical engineering and computer science department work in diverse industries and conduct research in a broad range of areas. They improve the stability and security of computers and communications networks, and they increase the efficiency of solar panels. They create unique algorithms to analyze financial markets and design robots capable of thinking like human beings. Our community members continually make breakthroughs that enable people to communicate more easily, manage their environments more effectively, and lead more comfortable lives than ever before. MIT has awarded electrical engineering degrees for nearly 130 years, and our educational programs have been at the cutting edge since their inception.

SPU27x: Science & Cooking: From Haute Cuisine to Soft Matter Science During each week of the course, you will watch as chefs reveal the secrets behind some of their most famous culinary creations — often right in their own restaurants. Inspired by such cooking mastery, the Harvard team will then explain, in simple and sophisticated ways, the science behind the recipe. Topics will include: soft matter materials, such as emulsions, illustrated by aioli; elasticity, exemplified by the done-ness of a steak; and diffusion, revealed by the phenomenon of spherification, the culinary technique pioneered by Ferran Adrià. To help you make the link between cooking and science, an “equation of the week” will capture the core scientific concept being explored. You will also have the opportunity to be an experimental scientist in your very own laboratory — your kitchen. By following along with the engaging recipe of the week, taking measurements, and making observations, you will learn to think both like a cook and a scientist.

UC BerkeleyX: CS188.1x: Artificial Intelligence *Note - This is an Archived course* This is a past/archived course. At this time, you can only explore this course in a self-paced fashion. Learn to Code for Free With These 10 Online Resources If Mark Zuckerberg and Bill Gates say so, it must be true: Understanding how to code is the new literacy. Take Zuck and Gates' advice — learn to code. Understanding computer programming will open doors to new jobs and opportunities. But you're probably thinking, where do I even begin? Will code classes drain my money and time? Fortunately for you, there are loads of ways to learn coding online, without paying a thing.

Introduction to Programming in Java a textbook for a first course in computer sciencefor the next generationof scientists and engineers Textbook. Our textbooks Introduction to Programming in Java [Amazon · Pearson · InformIT ] and Computer Science [Amazon · Pearson · InformIT ] are an interdisciplinary approach to the traditional CS1 curriculum with Java. We teach the classic elements of programming, using an "objects-in-the-middle" approach that emphasizes data abstraction. We motivate each concept by examining its impact on specific applications, taken from fields ranging from materials science to genomics to astrophysics to internet commerce.

CAPM Certification Ready to apply? Register and log in to get started. PMI’s Certified Associate in Project Management (CAPM)® is a valuable entry-level certification for project practitioners. 10 Reasons Python Rocks for Research (And a Few Reasons it Doesn’t) — Hoyt Koepke The following is an account of my own experience with Python. Because that experience has been so positive, it is an unabashed attempt to promote the use of Python for general scientific research and development. About four years ago, I dropped MATLAB in favor of Python as my primary language for coding research projects. This article is a personal account of how rewarding I have found that experience. As I describe in the next sections, the variety and quality of Python’s features has spoiled me. Even in small scripts, I now rely on Python’s numerous data structures, classes, nested functions, iterators, the flexible function calling syntax, an extensive kitchen-sink-included standard library, great scientific libraries, and outstanding documentation.

10 Online Courses to Beef Up Your STEM Knowledge Looking to boost your STEM knowledge? If you're not interested, can't afford, or don't have the budget to go back to school, you're in luck. There's a flourishing education landscape at your fingertips on the Internet. Garage Computer Mod - Custom Shop PC Mike Allen's Workshop is an orderly, well-maintained place. Located a few miles from the New Jersey shoreline, the compact garage of PM's senior automotive editor has high shelves stacked with meticulously organized, plainly labeled plastic bins of tools and welding equipment. Occasionally, however, the air in the shop is toxic. Mike is a mechanic and metalworker, and his grinding, routing and drilling sends plumes of metal particulate into the air. This is not so great for the lungs, but positively deadly for electronic equipment.