The 100 Best, Most Interesting Blogs and Websites of 2013 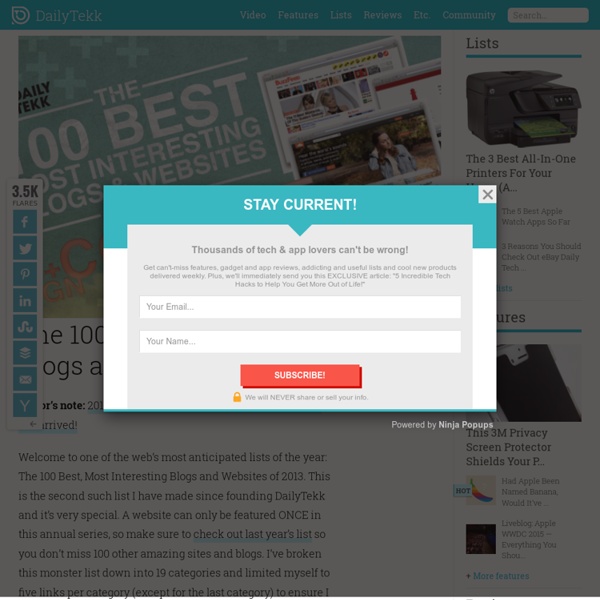 Editor’s note: 2015’s list of the best, most interesting websites has arrived! Welcome to one of the web’s most anticipated lists of the year: The 100 Best, Most Interesting Blogs and Websites of 2013. This is the second such list I have made since founding DailyTekk and it’s very special. A website can only be featured ONCE in this annual series, so make sure to check out last year’s list so you don’t miss 100 other amazing sites and blogs. I’ve broken this monster list down into 19 categories and limited myself to five links per category (except for the last category) to ensure I whittled away all but what I thought were the most deserving candidates of right here and right now in 2013. This post kicks off a whole new year of incredible top 100 lists (see a summary of the best curated content from last year in The Ultimate Lifehack for 2013: 200+ Incredible Sites and Services). Cool DailyTekk – The best tech site you’ve never heard of. Viral Culture News Design Humor Men Women Photo Video Audio Related:  lists

The 100 Best, Most Interesting Blogs and Websites of 2012 (Categorized) Editor’s note: 2015’s list of the best, most interesting websites has arrived! I don’t know about you, but I’m constantly running into so many cool websites I want to remember or recommend to people but I don’t always have time to make a note of them, add them to Evernote, bookmark them in Delicious, etc. So this is a good example of a post I created as a personal (and completely unscientific) resource that other people will probably benefit from as well. Some of these sites are pretty new while others have been around for a while now, but they are all awesome right now in 2012. So whether you are looking for a way to catch up on the latest Internet trends, want to find some exciting new content to load into your favorite news aggregating app or are just bored and need to waste some time online, this list represents hours of potential discovery. You might also like: Cool Curators Creativity and Design Tech & Gadgets Startups and Entrepreneurship Photos Video Living Business Miscellaneous / Other

Listphile: Shared lists, atlases, and databases 1001 Series Tackle Any Issue With a List of 100 The List of 100 is a powerful technique you can use to generate ideas, clarify your thoughts, uncover hidden problems or get solutions to any specific questions you’re interested in. The technique is very simple in principle: state your issue or question in the top of a blank sheet of paper and come up with a list of one hundred answers or solutions about it. “100 Ways to Generate Income”, “100 Ways to be More Creative” or “100 Ways to Improve my Relationships” are some examples. “One hundred entries? Isn’t that way too many?” Bear with me: it’s exactly this exaggeration that makes the technique powerful. When starting your list you may believe that there’s no way to get it done. Unlike the related Idea Quota tool — whose primary goal is to acquire the habit of coming up with ideas — the goal of a List of 100 is to take your mind by surprise. Ground Rules There are only two simple principles to keep in mind when making Lists of 100: 1. 2. The Dynamics of Making Lists of 100 1. 2. 3.

list.it - a place to stash your information FlexLists - Create Simple Free Database and Lists Online Site Map - Refdesk 5ives | Merlin's Lists of Five Things List Of The Day Explore Weird & Wonderful Lists At Snagsta What results is that you find all sorts of wonderful and weird lists including tourism advice, motivation tips, startup advice, book lists, movie lists and much more. There’s always new lists to check out, so it’s definitely somewhere you could head back to on a regular basis just to get a little more inspiration. Signing up at Snagsta only takes a moment, regardless of whether you create a log in or use Facebook Connect to log in. You’ll be ready to go in no time at all. Exploring Lists Browsing the lists can be done by categories listed at the bottom of all Snagsta pages, including some “best of” categories to let you quickly browse the popular lists. When browsing lists, ensure you let Snagsta know if you like it. Make Your Own Lists Creating a list is straightforward – the “Create List” link is at the top of all Snagsta pages. Take a look around for list ideas “” there’s plenty of unusual ideas out there. Finding Friends What Could Snagsta Do Better? It would be great to see :