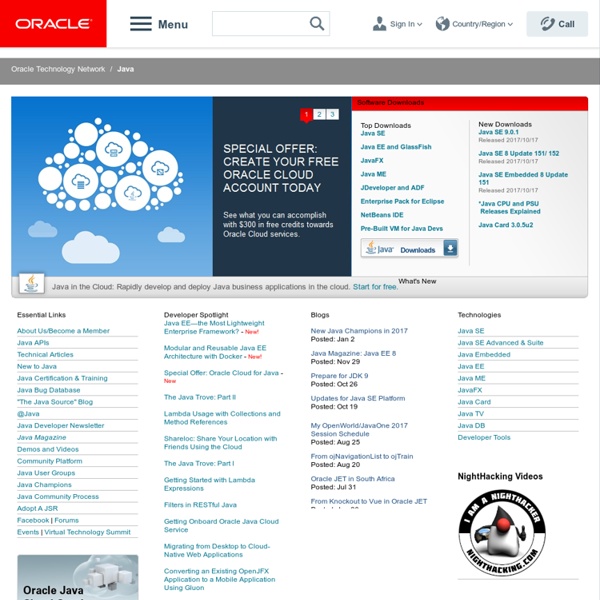 JSP - Scriptless JSP When you put Java code into JSP it can become a nightmare to manage, with the new JSP 2.0 spec there is a new Expression Language (EL), it looks and feels like Java but it isn't, there are slight differences. In the MVC tutorial, the servlet controller talked to the model then sent an attribute in the request scope before forwarding to the JSP view. The JSP had to get the attribute from the request scope and use it to render a response to send back to the client. But what if the the attribute is not a String but an instance of Person (we are presuming that the Person object has a setName and a getName method). The out put would be Person is foo.Person@676e44 not what we wanted, this is because the object's toString() method was run, there are two ways to obtain the results we want Standard Actions

Building library interposers for fun and profit April 11, 2001, 1:50 PM — Summary: Library interposition is a useful technique for tuning performance, collecting runtime statistics, or debugging applications. This article offers helpful tips and tools for working with the technique and gets you started on your own interposer. Most of today's applications use shared libraries and dynamic linking, especially for such system libraries as the standard C library (libc), or the X Window or OpenGL libraries. Operating system vendors encourage this method because it provides many advantages. 45 Free Online Computer Science Courses Missed lectures or hate teachers? Or want to study computer science courses without going to university? … You can study anytime anywhere because there are number of free online computer science courses available on internet that are very interactive.

Become a Programmer, Motherfucker If you don't know how to code, then you can learn even if you think you can't. Thousands of people have learned programming from these fine books: Learn Python The Hard Way Learn Ruby The Hard Way Learn Code The Hard Way Using Java DB in Desktop Applications Articles Index Sun Microsystems recently announced that it is distributing and supporting Java DB based on the 100 percent Java technology, open-source Apache Derby database. Derby was previously available under its earlier name, Cloudscape, from its former owners: Cloudscape, Informix, and IBM.

JSF tutorial with Eclipse and Tomcat Notice There is a newer JSF 2.0 tutorial out with Eclipse 3.6 SR1 (Helios) and Glassfish v3. Introduction In this tutorial you will learn how to setup a Sun JSF RI 1.2 (Mojarra) playground with Eclipse 3.4 (Ganymede) and Apache Tomcat 6.0 (Catalina). A JSF 1.2 environment requires at least the Java 5.0, JSP 2.1 and Servlet 2.5 API's. System Call Table From WikiContent The kernel is the heart of an operating system. It is responsible for such core functionality as memory management, process scheduling, TCP/IP networking, and so on.