Neo4j: NOSQL For the Enterprise 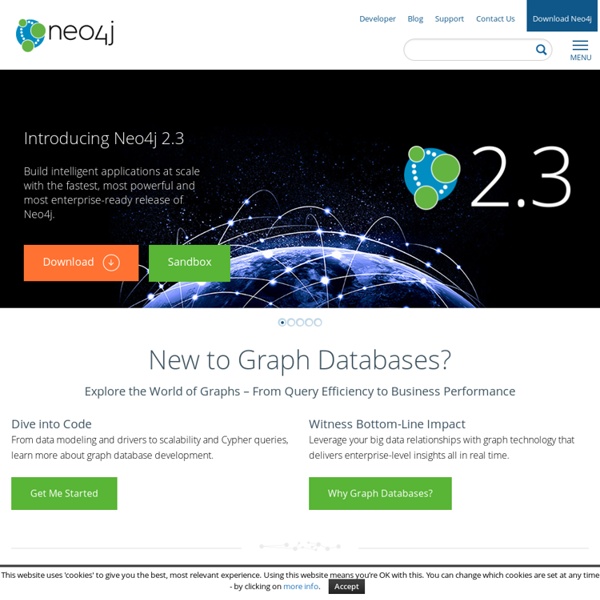 news and updates on bio4j Hello everyone, I’m happy to announce a new set of features for our tool Bio4jExplorer plus some changes in its design. I hope this may help both potential and current users to get a better understanding of Bio4j DB structure and contents. Node & Relationship properties You can now check with Bio4jExplorer the properties that has either a node or relationship in the table situated on the lower part of the interface. Five columns are included:

Understanding HBase and BigTable - Jimbojw.com From Jimbojw.com The hardest part about learning HBase (the open source implementation of Google's BigTable), is just wrapping your mind around the concept of what it actually is. I find it rather unfortunate that these two great systems contain the words table and base in their names, which tend to cause confusion among RDBMS indoctrinated individuals (like myself). This article aims to describe these distributed data storage systems from a conceptual standpoint. After reading it, you should be better able to make an educated decision regarding when you might want to use HBase vs when you'd be better off with a "traditional" database.

HowToUseKunderaWithSpring - kundera - JPA 1.0 ORM library for the Cassandra/Hbase/MongoDB database. Introduction We'll present here how to use Kundera with Spring (from 2.5). Spring + Hibernate is one of the most powerful combination of framework to access Database code with a minimum java code to write.

Disaster Area - Filed under 'neo4j' I recently helped add versioning support to Neo4j.rb . Versioning only works for Rails models at the moment. To add versioning to your model, you'll need include the Versioning module: How it works NoSQL "Structured storage" redirects here. For the Microsoft technology also known as structured storage, see COM Structured Storage. A NoSQL (often interpreted as Not Only SQL[1][2]) database provides a mechanism for storage and retrieval of data that is modeled in means other than the tabular relations used in relational databases.

Connections in Time Some relationships change over time. Think about your friends from high school, college, work, the city you used to live in, the ones that liked you ex- better, etc. When exploring a social network it is important that we understand not only the strength of the relationship now, but over time. NoSQL Data Modeling Techniques « Highly Scalable Blog NoSQL databases are often compared by various non-functional criteria, such as scalability, performance, and consistency. This aspect of NoSQL is well-studied both in practice and theory because specific non-functional properties are often the main justification for NoSQL usage and fundamental results on distributed systems like the CAP theorem apply well to NoSQL systems. At the same time, NoSQL data modeling is not so well studied and lacks the systematic theory found in relational databases. In this article I provide a short comparison of NoSQL system families from the data modeling point of view and digest several common modeling techniques. I would like to thank Daniel Kirkdorffer who reviewed the article and cleaned up the grammar. To explore data modeling techniques, we have to start with a more or less systematic view of NoSQL data models that preferably reveals trends and interconnections.

Understanding the World using Tables and Graphs « Aurelius March 22, 2012 by Marko A. Rodriguez The Table Perspective Visual Guide to NoSQL Systems - Nathan Hurst's Blog There are so many NoSQL systems these days that it's hard to get a quick overview of the major trade-offs involved when evaluating relational and non-relational systems in non-single-server environments. I've developed this visual primer with quite a lot of help (see credits at the end), and it's still a work in progress, so let me know if you see anything misplaced or missing, and I'll fix it. Without further ado, here's what you came here for (and further explanation after the visual). Note: RDBMSs (MySQL, Postgres, etc) are only featured here for comparison purposes. Also, some of these systems can vary their features by configuration (I use the default configuration here, but will try to delve into others later).