Some thoughts and musings about making things for the web 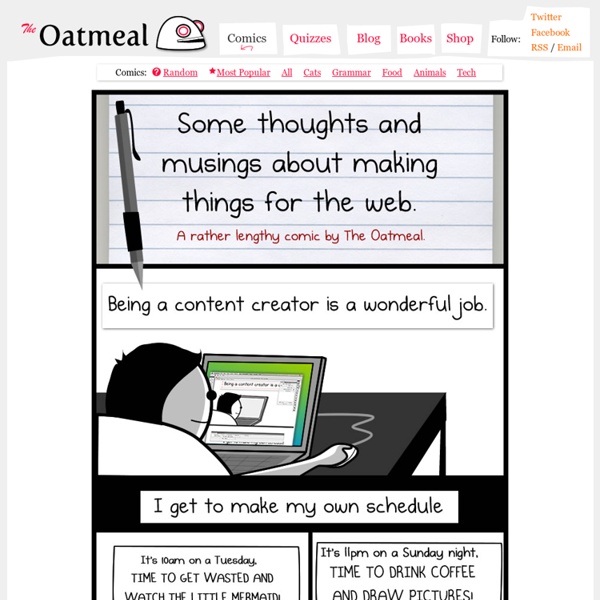 In Praise of Concision Some guy on TV is describing how he fitted his automobile with a new skin: gluing them one by one, he has blanketed every inch of its exterior with beer-bottle caps. Or he’s recounting how he fashioned, from zillions of ordinary toothpicks, a toothpick ten feet long and a foot thick—something Paul Bunyan couldn’t lift to his mouth. Or he’s displaying the dozens of photo albums that catalogue, exhaustively, the individual stacks of pancakes on which he has breakfasted daily for the past six years. And as I sit watching, one of my daughters ambles by, glances at the screen, and mutters, “Whoa, free time.” Whoa, free time. Concision. AdamHad ’em. One of Gillilan’s specialties was light verse, and a sympathetic reader will remark on how the poem, brief as it is, formally does what good light verse typically does: with its unlikely rhyme, it smoothes seeming clumsiness (“Had ’em”) into antic dexterity. On a graver note—as grave as humankind is capable of—what about “Jesus wept”?

Manuscript Format for Novels by Glen C. Strathy The manuscript format used in publishing has evolved a little over time as technology has changed, and if you grew up with word processors, it may seem rather quaint, old-fashioned, and downright boring to look at. Word processors come with many desktop publishing capabilities that are so tempting to use. And if you were working in any other business, you would probably take advantage of them to give your document a distinctive and attractive look. However, if you are submitting your book to agents and/or publishers, it is best to forget about all that and follow the correct manuscript format for publishing that was developed back in the days before word processors existed and professional writers used typewriters. There are several reasons why this format became standard. 1. Think about this. 2. Despite the fact that everyone uses computers, many editors still like to look at a hard copy and make editing marks in pencil between lines and in margins. 3. 4. 5.

Top 10 Storytelling Cliches Writers Need To Stop Using Cliché is the enemy of good writing. We, as writers, are trained to kill clichéd phrases in sentences. But that's not the only place they can hide—they can infect the spaces between the words, too. Clichés can infect storytelling techniques. Need to build some tension? Is your narrator a dick? Want to get all writerly in conveying the plot? These are storytelling devices that pop up again and again, crutches for the writer to lean on and help move the story along without actually having to stretch their abilities. 1. Why it's easy: Describing a character when you're writing in the third person is pretty easy when the narrative voice is omniscient. Why it's a cop out: It's lazy, it's been done to death, and anyway, no one looks in a mirror and takes stock of all their features in severe detail. 2. Why it's easy: Sometimes you need to give a little weight to a character who's been sitting around and doing nothing, or make sure the reader is on his or her toes. 3. 4. 5. 6. 7. 8. 9. 10.

The Art of Criticism No. 1, Harold Bloom Recently, Harold Bloom has been under attack not just in scholarly journals and colloquia, but also in newspapers, on the op-ed page, on television and radio. The barrage is due to the best-seller The Book of J, in which Bloom argues that the J-Writer, the putative first author of the Hebrew Bible, not only existed (a matter under debate among Bible historians for the last century) but, quite specifically, was a woman who belonged to the Solomonic elite and wrote during the reign of Rehoboam of Judah in competition with the Court Historian. The attacks have come from Bible scholars, rabbis, and journalists, as well as from the usual academic sources, and Bloom has never been more isolated in his views or more secure in them. He has become, by his own description, “a tired, sad, humane old creature,” who greets his many friends and detractors with an endearing, melancholy exuberance. What are your memories of growing up? That was such a long time ago. Almost none. I don’t think so. No.

Santtchez : Je me lave les mains au Jack... 20 Common Grammar Mistakes That (Almost) Everyone Makes I’ve edited a monthly magazine for more than six years, and it’s a job that’s come with more frustration than reward. If there’s one thing I am grateful for — and it sure isn’t the pay — it’s that my work has allowed endless time to hone my craft to Louis Skolnick levels of grammar geekery. As someone who slings red ink for a living, let me tell you: grammar is an ultra-micro component in the larger picture; it lies somewhere in the final steps of the editing trail; and as such it’s an overrated quasi-irrelevancy in the creative process, perpetuated into importance primarily by bitter nerds who accumulate tweed jackets and crippling inferiority complexes. But experience has also taught me that readers, for better or worse, will approach your work with a jaundiced eye and an itch to judge. Who and Whom This one opens a big can of worms. Which and That This is one of the most common mistakes out there, and understandably so. Lay and Lie This is the crown jewel of all grammatical errors. Moot

The Oatmeal 5 Tips for Punching Writer's Block in the Face People frequently ask me for writing advice, because professional writing is as fiercely competitive as it is desired, because they mistake me for the respected poet by the same name, or possibly just because the world is not a fair place and the God of Words wants them to fail in the most extravagant and embarrassing way possible. What these people are most concerned about, judging by the sheer number of requests, is really just one thing: "How do I get past this accursed writer's block?" While I may not be the right authority to help you with quality writing, I can sure as hell help you with quantity. If your muse is currently giving you the Kato Kaelin treatment, maybe try some of these handy tips and get that lazy wad off the couch and working again. #5. Know What You Write Jupiterimages/BananaStock/Getty Images The old saying is "write what you know," and that's sound advice. Does the pivotal scene of your genre-defying action adventure take place in your own living room? #4. #3.