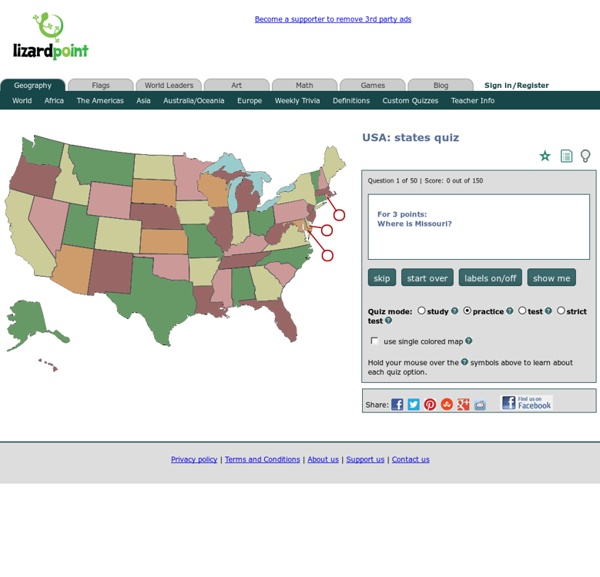 Small, hard to click regions are enhanced with a red circle, as shown below:

World Sunlight Map Watch the sun rise and set all over the world on this real-time, computer-generated illustration of the earth's patterns of sunlight and darkness. The clouds are updated daily with current weather satellite imagery. The Mercator projection used here is one way of looking at the spherical earth as a flat map. 60 mind-bending rock formations from around the world [PICs] Much like rare cloud formations, these rocks, stacks, pillars, caves, cliffs, massifs, volcanic plugs, karsts, arches, hoodoos, and concretions illustrate the tremendous diversity present in all Earth systems. Once you’re fired up by the images below, check back to our rock climbing page + destination pages to plan your next expedition.

Martin Luther King Google Maps Transparencies Imagery ©2014 TerraMetrics Terms of Use Report a map error Map The 10 best treks in the world These 10 classic treks are for serious walkers. All of them require a sturdy pair of lungs, fit legs and a good amount of preparation. However, if you choose to go on any of these trails then you will be rewarded with experiences that last a lifetime. In no particular order: 1. GR20, France Gridded Population of the World - GPW v3 Introduction Note: "Gridded Population of the World, v4" is now available and supersedes GPWv3. GPWv4 provides gridded population estimates with an output resolution of 30 arc-seconds (approximately 1 km at the equator) for the years 2000, 2005, 2010, 2015, and 2020 based on the results of the 2010 round of censuses, which occurred between 2005 and 2014. For more details about GPWv4 and to access the new data see GPWv3 depicts the distribution of human population across the globe.

Shadow Hunters : Eric Valli Cart - 0 items High Himalaya Share Louis Vuitton Caravans Map Collection Digital Maps The Harvard Map Collection is one of the oldest and largest collections of cartographic materials in the United States with over 500,000 items. Resources range from 16th century globes to modern maps and geographic information systems (GIS) layers. A selection of our materials has been digitally imaged and is offered both as true picture images and georeferenced copies. Plitvice, a watery paradise in Croatia In recent years, Croatia has changed from a relative unknown to one of the trendiest destinations in Europe. To a great extent this is due to the country's rocky littoral, which, washed by the Adriatic, is considered one of the most beautiful of the Mediterranean coastlines. Then there is the rich history and cultural heritage of medieval towns such as Dubrovnik, Split and Sibenik. But the well-deserved popularity also depends on the protected natural areas, which make up some ten per cent of the country's area. Eight areas enjoy national park status – a very high number for a relatively small country.