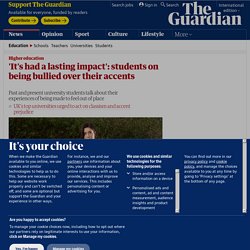 Here, students past and present reflect on their experiences: ‘It made feel like I did not belong’ Nina White, 26, from Stockton-on-Tees, studied English and theatre at the University of Warwick. UK's top universities urged to act on classism and accent prejudice. Universities must act to eradicate discrimination against working-class students, including the mockery of regional accents, equality campaigners have said. 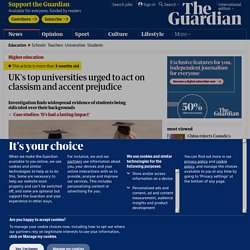 A Guardian investigation has found widespread evidence of students at some of the country’s leading universities being ridiculed over their accents and backgrounds, in some cases prompting them to leave education. The analysis found discrimination against working-class students was particularly prevalent among Russell Group universities. The group, which is made up of 24 institutions, has a reputation for academic excellence. In a series of Guardian interviews, students past and present reported bullying and harassment over their accents and working-class backgrounds. Some said their academic ability was questioned because of the way they spoke. This week the Guardian reported complaints of a “toxic attitude” towards some northern students at Durham University. 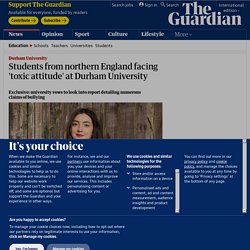 Lauren White, 20, is demanding action after interviews with fellow northern students at Durham revealed a “toxic attitude” towards them from some peers and tutors. Its vice-chancellor said her report highlighted unacceptable behaviours at odds with the university’s values and that the findings would be looked into. Last year a freedom of information request revealed that on average 7.8% of graduates over the last five years from Durham University – one of the country’s best-rated institutions – were from the north-east of England.

Barnsley poet Ian McMillan urges broadcasters to employ newsreaders with northern accents. He is known as the Bard of Barnsley and has long eulogised the beauty of regional dialects on his Radio Three programme The Verb. 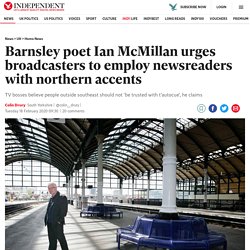 Now South Yorkshire poet Ian McMillan is urging broadcasters to employ newsreaders who speak with northern accents. The celebrity wordsmith – who still lives in the village where he grew up – said television bosses appeared to believe people outside the southeast could not “be trusted with t'autocue". Download the new Independent Premium app Sharing the full story, not just the headlines He added that if the media truly wanted to help level up the country, it was crucial to have more presenters speaking in a similar dialect to viewers all over the country. People with Birmingham and Afro-Caribbean accents still face bias in Britain, study shows. An "enduring hierarchy of accents" still exists in the UK with working class Birmingham and Afro-Caribbean accents facing the worst social bias, a new study has found. 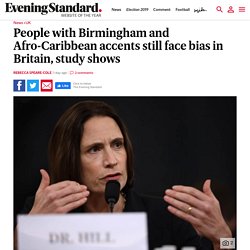 Public attitudes to different accents and their related stereotypes has remained largely unchanged over time, the Queen Mary University of London study found. Researchers examined current attitudes to accents with those shown by comparable surveys 15 years ago and 50 years ago. ​ They examined if people were biased, positively or negatively, towards different accents and whether accent bias affected a person's judgment in a professional setting.

The issue has been in the news after British-born US security adviser Fiona Hill gave evidence to the impeachment inquiry into President Donald Trump in Washington. During her evidence, Dr Hill, who is from Bishop Auckland, County Durham, explained how she became a US citizen by choice, saying: "This country has offered for me opportunities I never would have had in England. In case it's of use in school - some brief guidance on giving pupils the right messages about spoken language...… Anon – The Accentism Project. Gerraway with accentism – I’m proud to speak Yorkshire. Hopefully you haven’t subjected yourself to Still Open All Hours, the mystifyingly popular sequel to the classic Ronnie Barker comedy series of the 1970s-80s. 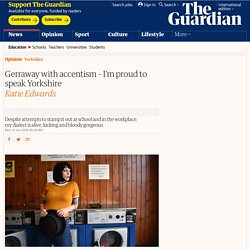 Brummie accents 'worse than staying silent', study shows. Lance Workman, professor of psychology, revealed that results showed those who said nothing were considered cleverer than Brummies. 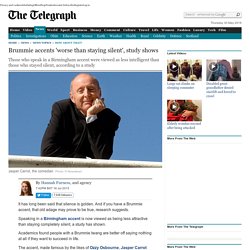 He added: "We paired random accents with faces and asked people to rate the attractiveness and intelligence of a young woman when reading a passage in the three accents. "We also added a silent condition where participants saw the face but did not hear any dialogue. "We randomised faces with accents in order to control for differences between faces. Adrian Chiles (Getty) Topical: Language Change -Oxford English Dictionary adds new entries: chuddies, jibbons and fantoosh. The rise of ‘accent softening’: why more and more people are changing their voices.

‘I feel that this award was not made to me as a man, but to my work – a life’s work in the agony and sweat of the human spirit, not for glory and least of all for profit, but to create out of the materials of the human spirit something which did not exist before.” 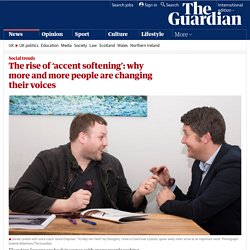 As I read this extract – from William Faulkner’s Nobel prize acceptance speech – I hand a plastic spoon to my voice coach every time I arrive at an important word. I am in central London, attending an “accent softening taster session” with the London Speech Workshop. Those who ridiculed my accent highlighted their ignorance – not mine. Friday morning. 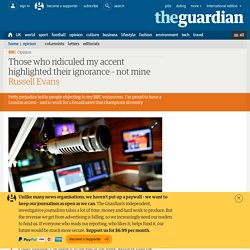 I’ve made it to the end of the week. Reprieve from the school run for two days. I’m working most of the weekend though, but that’s alright, because I am one of the very few people who loves what they do, and I’m grateful – especially because it wasn’t always this way. However, this week is different, as my phone starts to “ping” furiously. Do regional dialects have any place in the modern world? - Home News - UK - The Independent. It got him talking about the language of his youth. 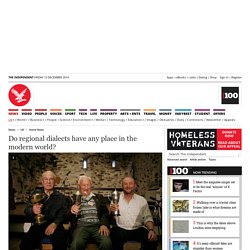 In his early teens in 1960s Penrith, a market town just outside the Lake District National Park, Dad explained he and his friends had a phrase they'd use to describe women who were, what they called in those days, well-endowed: "weel top niukled". He and a Cornish mining pal used to joke that if they ever owned a mine they would call it that: "Weel," he said, meant "well"; "top" took its usual meaning, but "niukled", the key word, he couldn't remember. Have you ever 'poshed up' your accent? Teachers pressured to speak “the Queen’s English”  ShutYerFace AccentsInAcademia. Teachers feel pressure to 'standardise' their accents in class.

Teachers feel under pressure to change their accents to be understood in the classroom, according to a study carried out at The University of Manchester. Why speaking proper still counts as having an accent. “Accent”, the journalist AA Gill writes in The Angry Island: Hunting the English, “is the last redoubt of prejudice”. Depending on where you hail from, it’s a statement that will have varying degrees of truth. When an Accent Gets in the Way of a Job - At Work. Do accents matter in modern Britain? Once, so long ago that it could have been in another life, I was required to take a voice test by the BBC. I had been previously recorded reading the Autocue and, confounded perhaps by barely submerged cadences from the East End, someone found cause to worry. So off I went to the chief voice trainer – a man whose honey-coated, phonetically immaculate delivery made him a legend inside the corporation and beyond.

Does your accent really hinder your job prospects? Bristolians auditioning for roles in the new Star Wars film were warned to "disguise their accents" by David Prowse, who played Darth Vader in the original movies. 'Brummie' is the least attractive accent. The Birmingham accent is considered the least attractive accent in the British Isles – and Southern Irish the most appealing A quick analysis of English dialects shows that there are roughly as many in the British Isles as there are in the whole of North America – including Canada, Bermuda and Native American dialects.

The same categorisation would, in North America, result in there being about one dialect per 10m people; in the British Isles there would be one for every 1.3m. Britain is highly peculiar in its linguistic variation, and the cultural contours associated with these differences make a small country feel large. Queen's English is Britain's favourite accent. Speaking out for regional accents.

The relationship between dialect and identity. BBC Breakfast's Stephanie McGovern: I was seen as too common for telly. Intellectual snobbery about regional accents must surely be in decline. Why I wish I'd kept my Welsh accent. SchoolBannedDialect. Debate over Teesside dialect and accent continues. A TEESSIDE school's attempt to get its pupils to mind their English language has been given a qualified "thumbs-up" by experts.

If accents no longer matter, why the sudden rush for elocution lessons? Is it wrong for a person to change their accent? Linguist: prejudice toward African American dialect can result in unfair rulings. Stanford Report, December 2, 2014 Linguistics professor John R. Radio 4 Word 4 Word - You Don't Want to Speak Like That! BBC Radio 4 - Word of Mouth, Accents Will Happen. BBC Radio 4 - Broadcasting House, 04/01/2015.