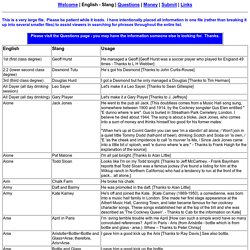 I got the following from Dudley who wondered about the connection between a kettle and a watch - he passed on the following story: It was commonplace for everyone to wear a pocket watch and chain in the waistcoat & it was also equally commonplace for the watch to be in the pawn shop as an interim loan security - however no one was keen for people to know that this situation was necessary, so the chain would be kept and worn as normal. In the kitchens of the day the fire would be an open one and there would be a bar or hook above it from which a length of chain would be secured and from there the kettle would be suspended above the fire to boil. So with this in mind, if the pocket watch chain, with no weight on it to hold it in the pocket, fell out and dangled minus the missing watch, there would always be some clever Charlie ready to pipe up "What's that for then, your bleedin' kettle?

The English Language in 67 Accents & Random Voices. Accent map - S�k p� Google. Sound map - Accents & dialects. Sounds Familiar? What you can hear You can listen to 71 sound recordings and over 600 short audio clips chosen from two collections of the British Library Sound Archive: the Survey of English Dialects and the Millennium Memory Bank. 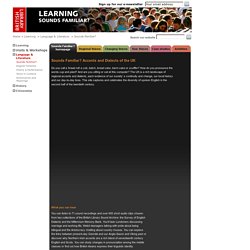 You’ll hear Londoners discussing marriage and working life, Welsh teenagers talking with pride about being bilingual and the Aristocracy chatting about country houses. You can explore the links between present-day Geordie and our Anglo-Saxon and Viking past or discover why Northern Irish accents are a rich blend of seventeenth century English and Scots. You can study changes in pronunciation among the middle classes or find out how British Asians express their linguistic identity. What you can do In addition there are interpretation and learning packages relating to the dual themes of language variation and language change within spoken English.

Introducing British accents. On my first teaching day at IH Newcastle, at least three different students said this to me: My friend told me that if I can understand Geordie, I will be able to understand any English. 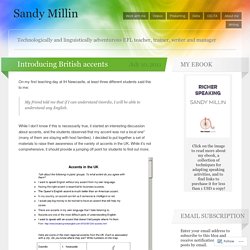 While I don’t know if this is necessarily true, it started an interesting discussion about accents, and the students observed that my accent was not a local one* (many of them are staying with host families). I decided to put together a set of materials to raise their awareness of the variety of accents in the UK. While it’s not comprehensive, it should provide a jumping off point for students to find out more. In Class Discuss the questions in small groups. The Videos These were the best examples I could find, but feel free to add other suggestions to the comments. Geordie: Gary Hogg – Funny Geordie Monologue. Breaking News English ESL Lesson Plan on Accents.

A recent survey in the UK has found that regional accents can be “bad for business”. 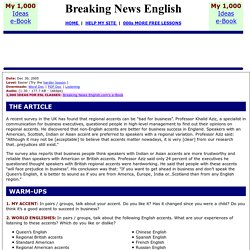 Professor Khalid Aziz, a specialist in communication for business executives, questioned people in high-level management to find out their opinions on regional accents. He discovered that non-English accents are better for business success in England. Speakers with an American, Scottish, Indian or Asian accent are preferred to speakers with a regional variation. African American English. Learning outcomes Students will understand that: African American English is not substandard English. 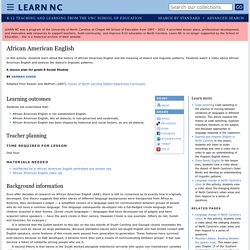 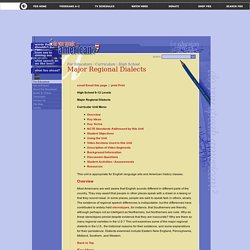 They may assert that people in other places speak with a drawl or a twang or that they sound nasal. In some places, people are said to speak fast; in others, slowly. The existence of regional speech differences is indisputable, but the differences have contributed to widely held stereotypes, for instance, that Southerners are friendly, although perhaps not as intelligent as Northerners, but Northerners are rude.

Dialects in Britain are disappearing as northerners increasingly use southern words. They cause a surprising amount of pain for something so small and can be infuriating to remove. 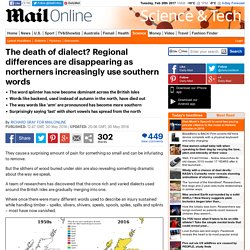 But the slithers of wood buried under skin are also revealing something dramatic about the way we speak. A team of researchers has discovered that the once rich and varied dialects used around the British Isles are gradually merging into one. Where once there were many different words used to describe an injury sustained while handling timber – spelks, slivers, shivers, speels, spools, spiles, spills and splints – most have now vanished. Researchers at the University of Cambridge have mapped out how dialects in Britain have changed since the 1950s. They found that many regional words for a piece of wood under the skin have vanished, with most of the country now using the word splinter, apart from a small part of the north east that still say spelk (illustrated) Queen's Christmas message. The Scottish Peppa Pig. Scottish Phrases and Common Sentences.