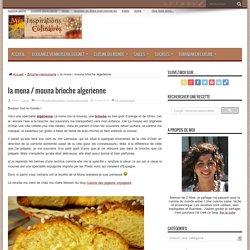 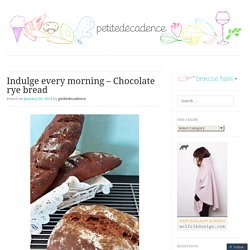 And I know bread is one of those things (like cookies) which you can’t say there’s an absolute winner, because that choice will always depend on what you’re eating it with, whether it’ll be eaten cold or warm, what time of the day you’re having it, etcetera, etcetera. But this recipe turned out to be so rich in flavor, with a slightly bitter bite from the rye and cocoa, balanced out with sweetness of the cranberries and raisins, and soft and fluffy on the inside but crusty on the outside.

What more could you ask for?? Nothing I say. Plus, you can bake it as a sandwich loaf, as baguettes, as diner rolls, whichever way you like! Pecan Date Bread. It feels like it’s been forever since I’ve posted. 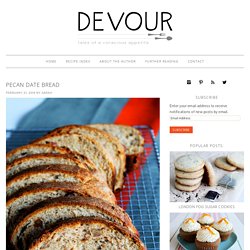 Doesn’t Monday seem really far away? I’ve had a busy week, including some out-of-town relatives staying with me, which is lovely but it hasn’t left me much time for the ol’ blog. I recently purchased a gem of an old cookbook (for $1!) Called the Canadian Family Cookbook by the Culinary Arts Institute, published way back in 1975. Pain aux canneberges et à l'orange (MAP) Chocolate Chip Hot Cross Buns. Only one more week until Easter! 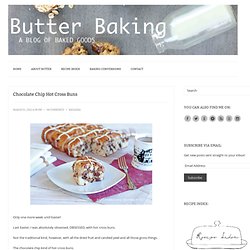 Last Easter, I was absolutely obsessed, OBSESSED, with hot cross buns. Not the traditional kind, however, with all the dried fruit and candied peel and all those gross things. The chocolate chip kind of hot cross buns. It started thanks to the local bakery chain in the mall where I work. Around last Easter, I was working at a mens retail store, and spent most of my time there amazingly BORED.

Sugar-crusted popovers. Set your weary eyes on these puppies. 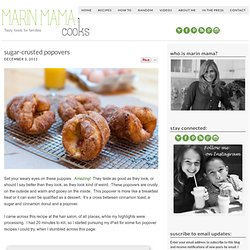 Amazing! They taste as good as they look, or should I say better than they look, as they look kind of weird. These popovers are crusty on the outside and warm and gooey on the inside. This popover is more like a breakfast treat or it can even be qualified as a dessert. It’s a cross between cinnamon toast, a sugar and cinnamon donut and a popover. I came across this recipe at the hair salon, of all places, while my highlights were processing. Kurtos Kalacs @ Chimney Cake. Now what is Kurtos Kalacs? 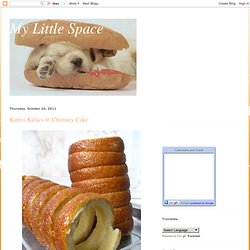 Kurtos Kalacs is actually a traditional Hungarian pastry which also called as Chimney Cake. It is originated from Transylvania. Apple Cinnamon Pull Apart Bread - JavaCupcake. I had the pleasure of getting 11 apples from a new friend here in Germany that came from her parents apple trees in Schweinfurt, Germany. I can’t say that I’ve ever tried an apple from Germany so this was a real treat. The apples she gave me were crisp and slightly tart, but full of great flavor! Nutella Banana Pull-Apart Bread.

The nooks and crannies filled with Nutella and banana in these single-serving pull-apart breads invite exploration. 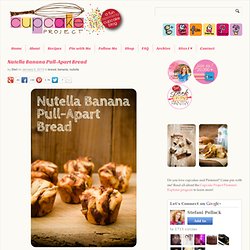 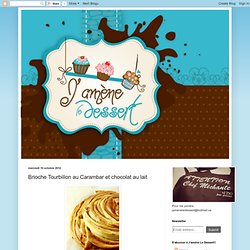 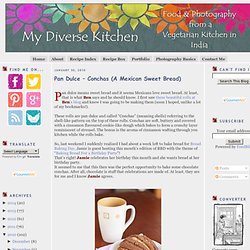 At least, that is what Ben says and he should know. I first saw these beautiful rolls at Ben’s blog and knew I was going to be making them (soon I hoped, unlike a lot of my bookmarks!). These rolls are pan dulce and called “Conchas” (meaning shells) referring to the shell-like pattern on the top of these rolls. Conchas are soft, buttery and covered with a cinnamon flavoured cookie-like dough which bakes to form a crunchy layer reminiscent of streusel. The bonus is the aroma of cinnamon wafting through you kitchen while the rolls bake. Pain brioché au miel et beurre salé {MAP} Nutella Pull Apart Bread with Blood Orange Icing. Gluten-free Chocolate Pretzels. Vegan, soy free recipe. Its a sleepy Monday today. 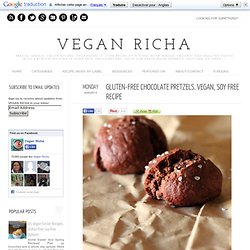 We had the first 90+ degrees F weekend this summer, so we pale Seattle-lites were all out in the Sun. Drives around Lake Washington, a dip here and there in the cool water. I could go knee high in the water, which is a yay for me! We also, looked at some houses, but none seem to catch our fancy, location preference and budget. Evening hours disappear watching the Olympics coverage, even though NBC keeps making gaffes all day like " hey if you dont want to know the results till the telecast late night, please Mute your TV now. Cara passed on the Hope Relay baton to me. Hope is me standing in line to pick up cupcakes for a friend, who just had a cute little baby, for 10 minutes without giving up.

Marble Twist Roll. When I first saw this interesting roll up bread at Dari Dapur MadihaA's blog I was intrigued by it. Since this month Aspiring Baker’s challenge is roll up cake I am not sure if I can submit this. So I wrote to the host Obsessedly Involved with Food and asked her about it as I don’t want to break the rules. She said as long as there is flour, eggs and sugar, and rolled up looking like a Swiss roll she will be alright with it. So, I rolled up my sleeves and get to work. It is a lot of work making this bread but if you have some time to spare this will be a great bread to try out. Ingredients for the chocolate filling:Adapted from: MahidaA's 125 water 50 gram sugar 1/4 tsp salt 15 gram milk powder 15 gram cocoa powder 25 gram flour 1/2 tbsp butter 40 gram dark chocolate – cut into small pieces 1.

I thought I was entitled to indulge a little and I decided to make Yeasted Chocolate Coffee Cake. When I think of comfort food, chocolate, homemade bread and cake are on the top of my list. Plus the aroma of homemade yeast bread baking in the oven is intoxicating and always brings me back to a happy place. Wonderful memories from my childhood always come rushing back. Chocolate Milk Bread. This is my favourite daily bread loaf. Love the flavour so much especially with some yummy spread. And here's the recipe. Blueberry Bagels. Pumpkin Marble Bread. Like a steam engine that has built up enough energy to charge, I was so excited with my new found interest that I looked up books that were reccomended for bread-making beginners like me.

I almost bought a book but decided against it because while spending about 1 hour browsing through 3 or 4 Japanese bread books at Kinokuniya, I realised the techniques and recipes were quite similar from what I could find on the web. Well, instead of adding yet again to my ever expanding library of magazines and recipe books, I decided to save the money and spend it on ingredients for more experimentation! But of course the long browsing time wasn't in vain either.