White Male Ways of Knowing. In lieu of an abstract, here is a brief excerpt of the content: Clifford L. 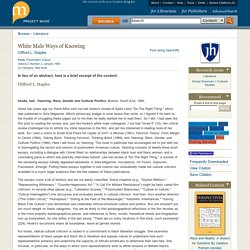 Staples hooks, bell. Yearning: Race, Gender and Cultural Politics. Boston: South End, 1990. About two years ago my friend Mike sent me bell hooks's review of Spike Lee's "Do The Right Thing," which was published in Zeta Magazine. The essays cover a lot of territory and are not easily classified. For hooks, radical cultural criticism is rooted in a commitment to black liberation struggle. OK. Many of hooks's readers are white guys; certainly most of the subscribers to Postmodern Culture are. My... The Transformative Power of Cultural Criticism: bell hook's Radical Media Analysis. The Transformative Power of Cultural Criticism: bell hooks’ Radical MediaAnalysis Cynthia Carter Introduction Since her groundbreaking work Ain’t I a Woman: Black Women and Feminism (1981) the formidable US feminist cultural critic and public intellectual, bell hooks, has generated consistently passionate, radical political critiques of themass media. 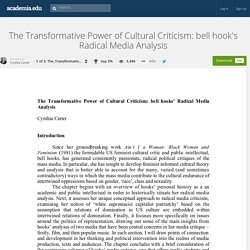 St century. Title. In all Spike Lee's films, he is at his creative best in scenes highlighting black males. 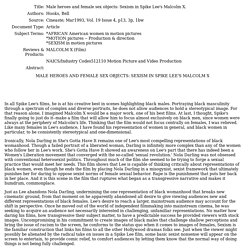 Portraying black masculinity through a spectrum of complex and diverse portraits, he does not allow audiences to hold a stereotypical image. For that reason alone, I imagined Malcolm X would be a major work, one of his best films. At last, I thought, Spike's finally going to just do it--make a film that will allow him to focus almost exclusively on black men, since women were always at the periphery of Malcolm's life.

Thinking that the film would not focus centrally on females, I was relieved. Transcript_402.pdf. Spike Lee: Finding the Story and Forcing the Issue - Jason P. Vest. Do the Right Thing - From the Current - The Criterion Collection. Leaving the theater after the tumultuous world premiere of Do the Right Thing at Cannes in May of 1989, I found myself too shaken to speak, and I avoided the clusters of people where arguments were already heating up. 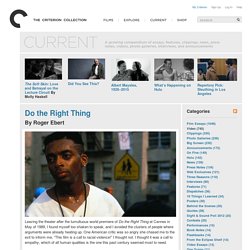 One American critic was so angry she chased me to the exit to inform me, “This film is a call to racial violence!” I thought not. I thought it was a call to empathy, which of all human qualities is the one this past century seemed most to need. Perhaps I was too idealistic, but it seemed to me that any open-minded member of the audience would walk out of the movie able to understand the motivations of every character in the film—not forgive them, perhaps, but understand them. A black viewer would be able to understand the feelings of Sal, the Italian-American whose pizzeria is burned by a mob, and a white viewer would be able to understand why a black man—who Sal considered his friend—would perform the action that triggers the mob. And yet something bad does happen.

Essay on Spike Lee's Do the Right Thing. Racial Issues In Spike Lee Movies Film Studies Essay. Racism refers to the intolerance or discrimination of a person or a group of people based on their skin color, language, religion, customs and/or beliefs. 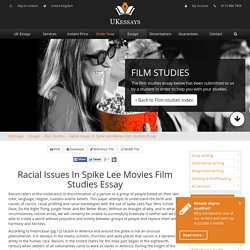 This paper attempts to understand the birth and causes of racism, racial profiling and racial stereotypes with the use of Spike Lee’s four films School Daze, Do the Right Thing, Jungle Fever and Mo’ Better Blues. Without an thought of why, and in what circumstances, racism arises, we will certainly be unable to successfully eradicate it neither will we be able to create a world without prejudice and enmity between groups of people and replace them with harmony and fairness. According to Fredrickson (pg.12) racism in America and around the globe is not an unusual phenomenon. It is obvious in the media, schools, churches and work places that racism is a dynamic entity in the human race. Racism, in the United States for the most part began in the eighteenth century when settlers of all nationalities came to work as slaves in America. 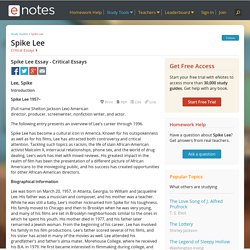 The following entry presents an overview of Lee's career through 1996. Spike Lee has become a cultural icon in America. Spike Lee. Silent racism: how well-meaning white people perpetuate the racial divide - Barbara Trepagnier - Google Books. ‘Silent Racism’ book sheds light on current racial climate : University News Service : Texas State University. By Marc SpeirUniversity News Service June 27, 2007Barbara Trepagnier, sociology professor at Texas State University-San Marcos, says that people should replace the question of whether or not they are racist with asking themselves how they are racist. 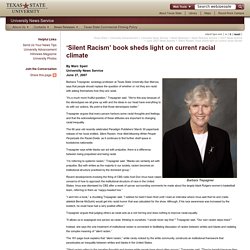 “It’s a much more fruitful question,” Trepagnier said. “We’re this way because of the stereotypes we all grew up with and the ideas in our head have everything to do with our actions. My point is that those stereotypes matter.” Trepagnier argues that every person harbors some racist thoughts and feelings, and that the acknowledgements of these attitudes are important to changing racial inequality. The 66 year-old recently celebrated Paradigm Publishers’ March 30 paperback release of her book entitled, Silent Racism: How Well-Meaning White People Perpetuate the Racial Divide, as it continues to find further shelf space in bookstores nationwide. “I’m referring to systemic racism,” Trepagnier said.