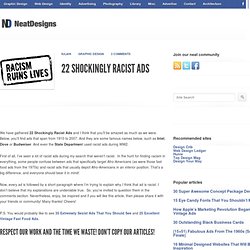 Below, you’ll find ads that span from 1910 to 2007. And they are some famous names below, such as Intel, Dove or Budweiser. And even the State Department used racist ads during WW2. First of all, I’ve seen a lot of racist ads during my search that weren’t racist. Now, every ad is followed by a short paragraph where I’m trying to explain why I think that ad is racist. P.S. Respect our work and the time we waste! Intel (2007) Why is it racist: Afro-Americans shown as athletes. Fairy Soap (1940s) Why it is racist: “Why doesn’t you Mamma Wash You with Fairy Soap?” Nigger Make-up (1930s) Why it is racist: First, the word nigger. Budweiser (1934) Why is it racist: Another overused stereotype. Dove (2011) Why is it racist: Although Dove denied the allegations, this is clearly a racist ad. Maxwell House (1950s) Pears’ Soap (1920s) Revere Copper and Bras’s War Bonds (1944) Plymouth (1940) 25 Most Racist Advertisements and Commercials — Ad Savvy.

A sarcastic spoof on the Intel ad below If you think the era of political correctness has taught advertisers to create campaigns that are more sensitive and intelligent, think again. 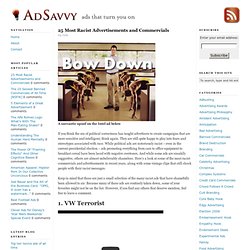 They are still quite happy to play into fears and stereotypes associated with race. While political ads are notoriously racist – even in the current presidential election – ads promoting everything from cars to office equipment to breakfast cereal have been laced with negative overtones. And while some ads are sneakily suggestive, others are almost unbelievably shameless. Here’s a look at some of the most racist commercials and advertisements in recent years, along with some vintage clips that still shock people with their racist messages. Keep in mind that these are just a small selection of the many racist ads that have shamefully been allowed to air. 1. One of the most racist commercials in recent history is particularly appalling. 2. 3. Unfortunately, the racist attacks on Harold Ford didn’t end there. 41 Mind-Blowingly Racist Vintage Ads You Need To See. The following images will be disturbing and shocking, as you see the casual way with which businesses have deployed racism to sell their products. 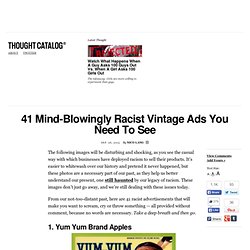 It’s easier to whitewash over our history and pretend it never happened, but these photos are a necessary part of our past, as they help us better understand our present, one still haunted by our legacy of racism. These images don’t just go away, and we’re still dealing with these issues today. From our not-too-distant past, here are 41 racist advertisements that will make you want to scream, cry or throw something — all provided without comment, because no words are necessary. Take a deep breath and then go. 1. Credit/VintageAdBrowser 2. Credit/Znaemise.com 3. Credit/vintageadbrowser 4. 5. Vintage-ads.livejournal.com 5. Credit/Vintageadbrowser. 20 Ads That Changed How We Think About Race In America.