Black History and the question of racism

The Struggle to Finally Desegregate American Cities. A sign outside the Sojourner Truth homes, a US federal housing project in Detroit, Michigan. 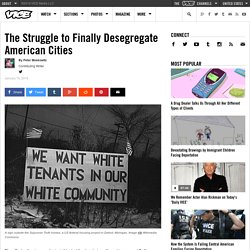 Image via Wikimedia Commons. Etats-Unis : l’éternel retour de la question raciale ? (deuxième partie) The Birth of a Nation: Nate Parker's slave drama gets standing ovation at Sundance Film Festival, early Oscar buzz. This year’s Sundance Film Festival has already screened some quite remarkable projects, but none have had the same impact as Nate Parker’s The Birth of a Nation. 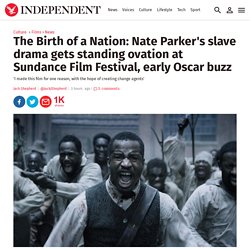 The film tells the tale of Nat Turner (played by Parker), an African-American slave who led a rebellion in the 1800s in Virginia. Starring alongside the actor/director/all-star wrestler are Arnie Hammer (Man from U.N.C.L.E), Aja Naomi King (How to Get Away with Murder) and Jackie Earle Harley (Watchmen). Parker, who greeted a waiting audience at the Eccles Theatre, was met with a standing ovation as he took to the stage, according to The Hollywood Reporter. Then, two hours later, they were up on their feet again, clapping until the credits had finished rolling.

"I made this film for one reason, with the hope of creating change agents,” he told the crowd. “I just want you, if you are affected and you are so moved, to ask yourself, 'Are there systems in my life that need attention whether it be racial, gender? ' The Oscars’ Racist Refusal to Honor Modern Black Heroes. Hillsong is the church of "cool Jesus" and Hollywood—but under the facade is an ultraconservative stance on gays and a pedophilia scandal involving its deceased founder. 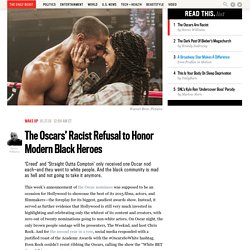 If I were to write you a story about the Australian Pentecostal mega-church Hillsong, then I would usually begin with a visit. I would line up with some of the 8,000 other lost souls on any given Sunday and tell you about the fashion vibe and about the rocking—but not too rocking—musical score that’s central to the worship. I’d write about millennials and celebrities coming together in the heathenish den that is New York City to literally raise their hands up to praise Jesus and perhaps take a selfie. But really, there have been enough of these types of stories since Hillsong hit American shores in 2010. But the story I’m going to write is a different story, one with a more complex narrative beyond the celebrity baptisms and Broadway-style Christmas pageants. “What good is a vow of poverty?” “Welcome to church!” 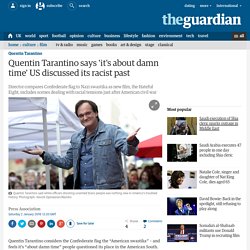 As a Black Woman, I'm Not 'Allowed' to Be Depressed. When I was young I was frequently described as "moody. 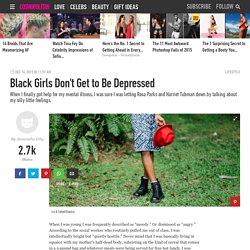 " Or dismissed as "angry. " According to the social worker who routinely pulled me out of class, I was intellectually bright but "quietly hostile. " Never mind that I was basically living in squalor with my mother's half-dead body, subsisting on the kind of cereal that comes in a 5-pound bag and whatever meals were being served for free hot lunch; I was diagnosed as having "an attitude problem. " So I rocked with that. When you're a kid, it's sometimes just easier to go along with other people's definitions of who you are.

Advertisement - Continue Reading Below No one in my house was talking about depression. Depression was something that happened to white people on television, not a thing that could take down a Strong Black Woman. I tried to take my own life in 1993 and the general response when it failed was basically LOL, TOUGHEN UP. America Needs a National Slavery Monument. Photo Fresno, Calif. — ONE HUNDRED AND FIFTY years ago today, America ratified the 13th Amendment, abolishing slavery throughout the country. 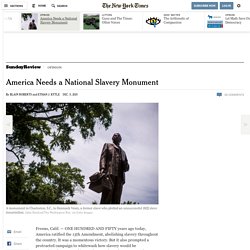 It was a momentous victory. But it also prompted a protracted campaign to whitewash how slavery would be remembered, one waged in Southern parks and squares, on the region’s university campuses and statehouse grounds. Teenager's mysterious death evokes painful imagery in North Carolina: 'It's in the DNA of America' Friday 29 August was a big day for Lennon Lacy. 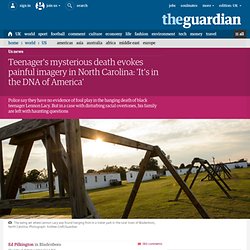 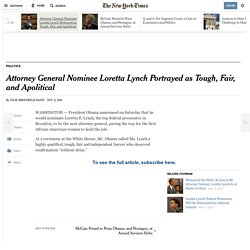 Lynch, the top federal prosecutor in Brooklyn, to be the next attorney general, paving the way for the first African-American woman to hold the job. At a ceremony at the White House, Mr. Obama called Ms. Lynch a highly qualified, tough, fair and independent lawyer who deserved confirmation “without delay.” “She has spent years in the trenches as a prosecutor, aggressively fighting terrorism, financial fraud, cybercrime — all while vigorously defending civil rights,” the president said in the Roosevelt Room, where he appeared with Ms.

“Loretta might be the only lawyer in America who battles mobsters and drug lords and terrorists, and still has a reputation for being a charming people person,” Mr. Ms. Born in Greensboro, N.C., Ms.